Chapter 4-7 of If the IPCC was Selling Manmade Global Warming as a Product, Would the FTC Stop their deceptive Ads? included comparisons of the CRUTEM3 Land Surface Temperature anomalies to the multi-model mean of the CMIP3 climate models. For those who have purchased the book, see page 99. As you will recall, CMIP3 stands for Phase 3 of the Coupled Model Intercomparison Project, and CMIP3 served as the source of the climate models used by the Intergovernmental Panel on Climate Change (IPCC) for their 4th Assessment Report (AR4). CRUTEM3 is the land surface temperature data available from the Met Office Hadley Centre and the Climatic Research Unit at the University of East Anglia.

This post compares the new and improved CRUTEM4 land surface temperature anomaly data to the same CMIP3 multi-model mean. CRUTEM4 data was documented by the 2012 Jones et al paper Hemispheric and large-scale land surface air temperature variations: An extensive revision and an update to 2010. I’ve used the annual time-series data, specifically the data in the second column here, changing the base years for anomalies to 1901 to 1950 to be consistent with Figure 9.5 of the IPCC’s AR4.

As shown in Figure 1, and as one would expect, the models do a good job of simulating the rate at which the CRUTEM4-based global land surface temperatures rose during the late warming period of 1976 to 2010.

But like CRUTEM3 data, that’s the only period when the IPCC’s climate models came close to matching the CRUTEM4-based observed linear trends. 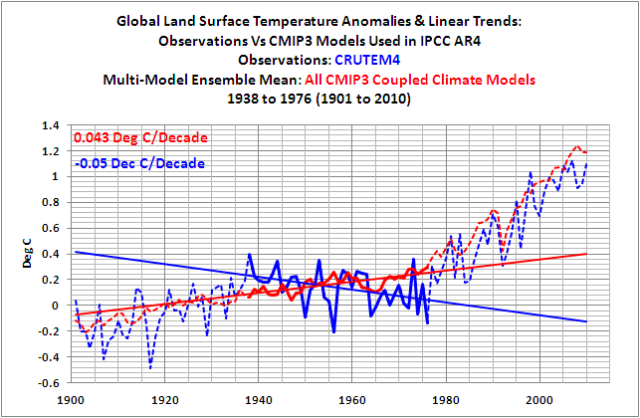 Figure 3 compares the models to the global CRUTEM4 data during the early warming period of 1917 to 1938. The observed rate at which global land surface temperatures warmed is almost 5 times faster than simulated by the IPCC’s climate models. 5 times faster.

And in Figure 4, the models are shown to be unable to simulate the very slow rate at which land surface temperatures warmed during the early “flat temperature” period.

According to the models, the linear trend of the global land surface temperatures during the late warming period should be 6.6 times higher than during the early warming period. See Figure 5. 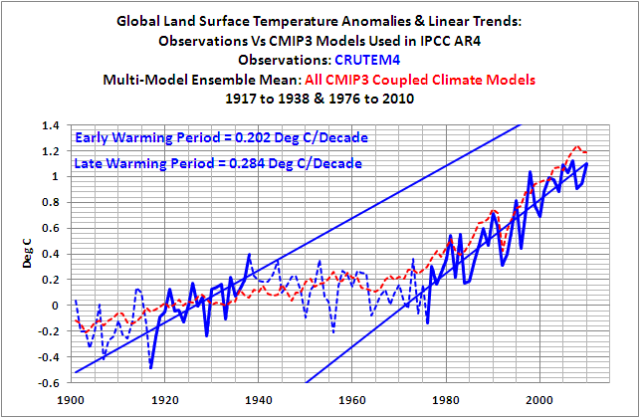 ebook (pdf and Kindle formats): If the IPCC was Selling Manmade Global Warming as a Product, Would the FTC Stop their deceptive Ads?

And as noted in the post, the annual CRUTEM4 data is available through the Met Office website:

Research interest: the long-term aftereffects of El Niño and La Nina events on global sea surface temperature and ocean heat content. Author of the ebook Who Turned on the Heat? and regular contributor at WattsUpWithThat.
View all posts by Bob Tisdale →
This entry was posted in Model-Data LOST. Bookmark the permalink.