And The Current Winner Is…

In the race to have the highest trend since 1976, does GISS LOTI still hold its lead, or has the new HadCRUT4 data overtaken GISS?

And the current winner is…

On a long-term basis, the new HadCRUT4 data comes in a lowly third, just behind the dataset it obsoletes, HadCRUT3. 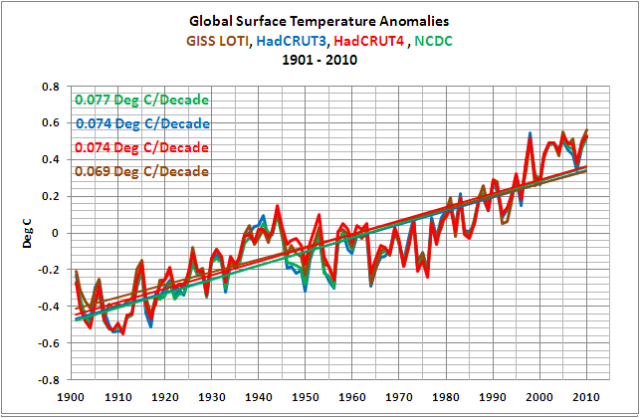 The IPCC claims that only the rise in anthropogenic greenhouse gases can explain the warming over the past 30 years. Satellite-based sea surface temperature disagrees with the IPCC’s claims. Most, if not all, of the rise in global sea surface temperature is shown to be the result of a natural process called the El Niño-Southern Oscillation, or ENSO. This is discussed in detail in my first book, If the IPCC was Selling Manmade Global Warming as a Product, Would the FTC Stop their deceptive Ads?, which is available in pdf and Kindle editions. A copy of the introduction, table of contents, and closing can be found here.

The land plus sea surface temperature datasets are available through the following links:

1 Response to And The Current Winner Is…