UPDATE:  I just discovered that the HADCRUT4 data has been released.  I’ll be posting on it shortly. See here.

A weighted average of the two new global land surface (CruTEM4) and sea surface (HADSST3) temperature anomaly datasets was used in my recent post as a preview of the new HadCRUT4 dataset. The weighting was the same used in HadCRUT3. See note below. That post compared the approximated HadCRUT4 data to the multi-model mean of the CMIP5 models presently being prepared for the IPCC’s 5thAssessment Report (AR5). In this post, we’ll compare the approximated HadCRUT4 data to the other global surface temperature products available from GISS, Hadley Centre, and NCDC.

The HadCRUT4 dataset was presented in the Morice et al (2012) paper Quantifying uncertainties in global and regional temperature change using an ensemble of observational estimates: The HadCRUT4 dataset. Unfortunately, the Hadley Centre has not yet released its new HadCRUT4 land plus sea surface temperature data through its HadCRUT4 webpagein a form that’s convenient to use. The other unfortunate fact is HADSST3 has not yet been updated from its end date of 2006. But we’ll take a look at the dataset anyway, just to get an idea of where HadCRUT4 will fit in with the other surface temperature products.

Note: The CruTEM4 data is available at the Hadley Centre’s webpage here, specifically the annual data here, and the HADSST3 data is available through the KNMI Climate Explorer here. The weighting used to approximate the HadCRUT4 data that follows was 28.92% land surface temperature and 71.08% sea surface temperature. It is assumed for this post that the HadCRUT4 dataset will have the same land to sea ratio as the HadCRUT3 dataset.

The approximated HadCRUT4 data, on an annual basis, is compared to the global GISS Land-Ocean Temperature Index (LOTI), HadCRUT3, and NCDC Land Plus Sea Surface Temperature datasets from 1901 to 2006 in Figure 1. Also shown are the corresponding linear trends. Since 1901, and with the HADSST3-based end year of 2006, the new HadCRUT4 data should have a slightly lower trend than the HadCRUT3 data it replaces. The HadCRUT4 data long-term trend should fall between the NCDC and GISS LOTI data. 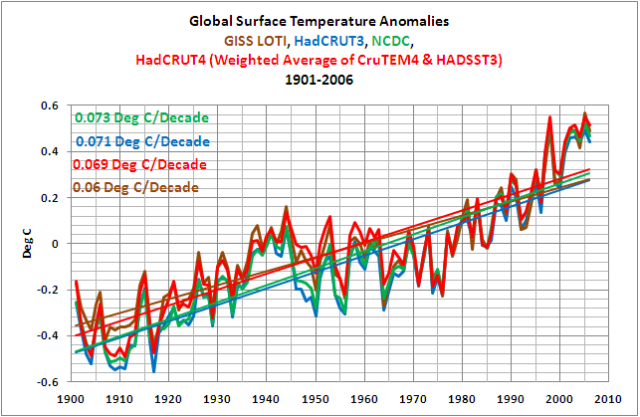 Figure 2 provides a shorter-term comparison, using the same datasets, with 1976 as the start year. Over the short-term, it appears the HadCRUT4 data will have the highest linear trend, being noticeably higher than the GISS and NCDC products and significantly higher than the soon-to-be-obsolete HadCRUT3 data.

We’ll have to see what happens when the Hadley Centre tacks on another 5+ years of sea surface temperature data and is able to update the HadCRUT4 data to present.

The IPCC claims that only the rise in anthropogenic greenhouse gases can explain the warming over the past 30 years. Satellite-based sea surface temperature disagrees with the IPCC’s claims. Most, if not all, of the rise in global sea surface temperature is shown to be the result of a natural process called the El Niño-Southern Oscillation, or ENSO. This is discussed in detail in my first book, If the IPCC was Selling Manmade Global Warming as a Product, Would the FTC Stop their deceptive Ads?, which is available in pdf and Kindle editions. A copy of the introduction, table of contents, and closing can be found here. Of course, donationsare also welcome and gratefully accepted, because the rumor that bloggers skeptical of anthropogenic climate change are supported by big oil is simply that, a rumor.

With the exception of the HADSST3 data, the Met Office surface temperature data used in this post are available at the following web pages:

The remaining surface temperature data presented in this post are available through the KNMI Climate Explorer: