What Do Observed Sea Surface Temperature Anomalies and Climate Models Have In Common Over The Past 17 Years?

One word answer: NOTHING!!!!

In this post, we’ll compare satellite-based sea surface temperature anomalies (Reynolds OI.v2) for the past 17 years to the multi-model ensemble mean of the climate models that were prepared for the 2007 4th Assessment Report (AR4) of the Intergovernmental Panel on Climate Change. We’ve already showed how poorly the models simulate the warming rates of the global oceans on an individual ocean basis for the entire 30-year term of the Reynolds OI.v2 sea surface temperature data. Refer to the posts here and here, and more recently here. So the failings of the models come as no surprise. But this post does present something that will come as a surprise to many of you.

Our results show that temperature records of at least 17 years in length are required for identifying human effects on global-mean tropospheric temperature.

While the failings of the models might come as no revelation, something else might—but first a note to build the suspense. Combined, the Indian and Pacific Oceans from pole to pole (90S-90N, 20E-70W) represent about 75% of the surface area of the global oceans. See Figure 1. It’s a map of the global oceans that’s been divided into two sections: the “Indian & Pacific Ocean Plus” and “Atlantic Ocean Plus” where the “Plus” is used to note that the datasets have been extended to the South and North Poles. 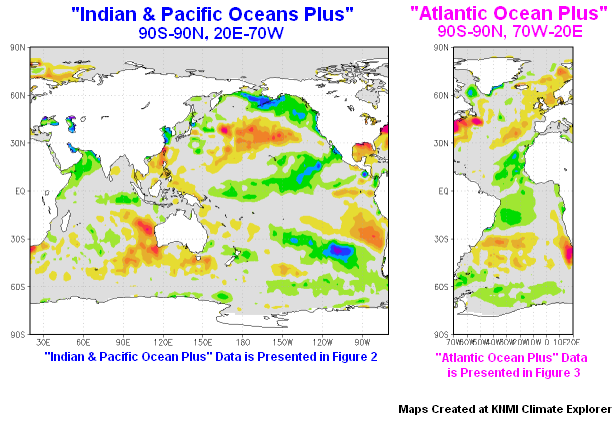 Figure 1 (Revised to note which graphs present the data for the two regions.)

Why are we dividing the ocean into those two subsets? Here comes the surprise.

The sea surface temperature anomalies for the combined Indian and Pacific Oceans from pole to pole show basically no warming for the past 17 years. None, nada, zip. See Figure 2. The cooling of the entire Pacific Ocean is strong enough since 1995 and the Pacific is so large that we can merge its data with the still-warming Indian Ocean data and wind up showing the combined dataset has not warmed for 17 years. Again, the Indian and Pacific Oceans represent 75% of the surface of the global oceans and together they have not warmed in 17 years. 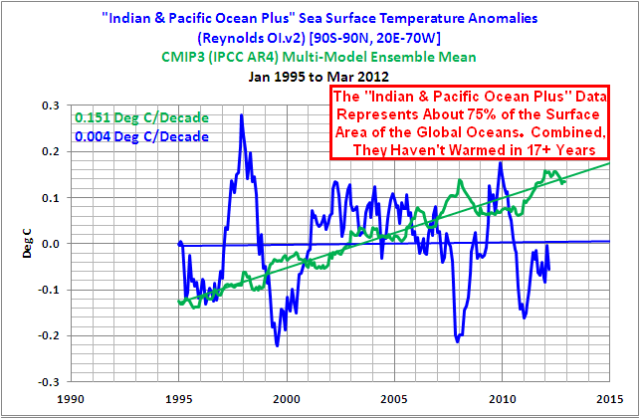 If you’re for some reason hoping the data for the rest of the global oceans, the “Atlantic Ocean Plus” data, will make up the difference, you’re about to be disappointed. As illustrated in Figure 3, the models are showing a warming rate that’s about 50% higher than what has been observed. That’s not too good. Then when you consider the blatantly obvious model failings for the “Indian & Pacific Ocean Plus” subset, you wonder how the climate-model based anthropogenic global warming charade can continue. Yet it does. 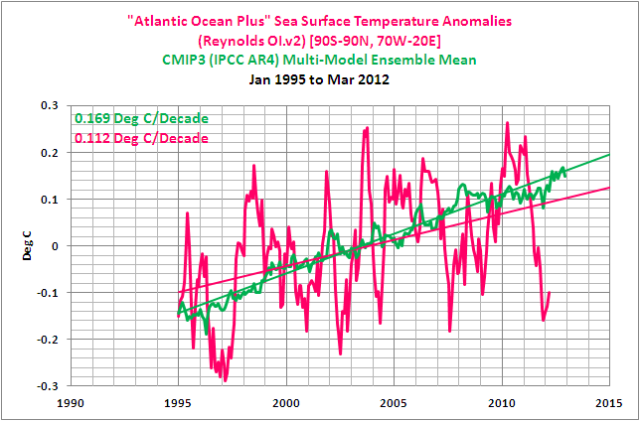 A FEW PRELIMINARY NOTES FOR NEWCOMERS TO MODEL-DATA PRESENTATIONS

The Reynolds OI.v2 sea surface temperature anomaly data is available for download from the NOAA NOMADS website and from the KNMI Climate Explorer. NOAA uses the bases years of 1971-2000 for anomalies. But we’re looking at the period of January 1995 to March 2012 and that extends outside of those base years. The base years are not adjustable at the NOAA NOMADS site, but they are adjustable at the KNMI Climate Explorer. I used the data through the KNMI Climate Explorer so that I could change the base years for anomalies to 1995-2011. This helped to reduce the strong seasonal signal that appears in the data of some ocean basins. The North Pacific (0-65N, 100E-90W) sea surface temperature anomaly data from NOAA, for example, has a very strong seasonal component, as shown in Figure 4. Using the base years of 1995-2011, also illustrated, the seasonal component is drastically reduced. And as shown, the trends are basically the same, so minimizing the additional seasonal component makes no difference to the model-data comparisons in this post. (And yes, the sea surface temperature anomalies of the North Pacific have been cooling for the past 17 years.) 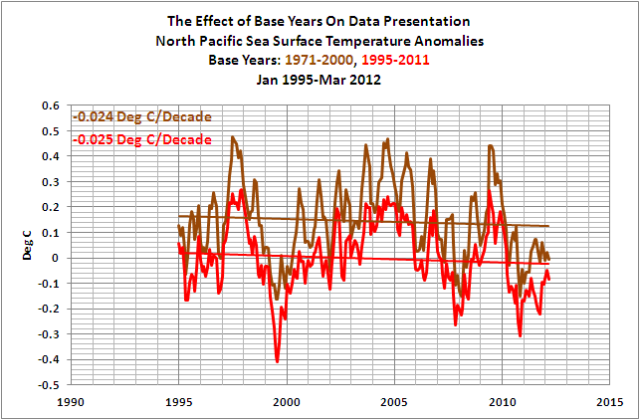 The multi-model mean sea surface temperature dataset is identified as TOS (ocean surface temperature) at the KNMI Climate Explorer and is available through its Monthly CMIP3+ scenario runs webpage. If you were to scroll up to Figure 2, you’ll note that there are major year-to-year variations in sea surface temperature anomalies that don’t appear in the multi-model mean data. Those observed major variations are caused by El Niño events (the upward spikes) and La Niña events (the downward ones). There are a few things to keep in mind about the model-mean data and the resulting curves. They represent the average of the climate model simulations at the CMIP3 archive, which was used in the IPCC’s AR4. There are a couple dozen climate models in the archive and some of the models include multiple simulations. For example, GISS presented 9 simulations (ensemble members) for its Model-ER and 5 ensemble members for its Model-EH. Some of the climate models attempted to model the El Niño-Southern Oscillation; others didn’t. The models that tried to simulate ENSO did a poor job and none of them could match the observed frequencies and magnitudes of El Niño and La Niña events. And since each model simulation has a different frequency and magnitude for their ENSO signals, they are smoothed out when the models are averaged. But that’s a good thing. That leaves a signal that is supposed to represent the forced component of the models, which is why we use the multi-model mean.

The reasons I’m presenting the multi-model mean were discussed in more detail in an earlier post Part 2 – Do Observations and Climate Models Confirm Or Contradict The Hypothesis of Anthropogenic Global Warming?, under the heading of CLARIFICATION ON THE USE OF THE MODEL MEAN. Please refer to that discussion.

MODEL-DATA COMPARISONS FOR THE INDIAN AND PACIFIC OCEANS

As shown in Figure 2, there has been no warming of the “Indian & Pacific Ocean Plus” sea surface temperature anomalies since 1995. That doesn’t mean that one of the individual ocean basins has not warmed. See Figure 5. The Indian Ocean (60S-30N, 20E-120E) sea surface temperature anomalies have warmed, except it’s at a rate that’s about 42% of what was simulated by the IPCC’s climate models. And as noted earlier, the North Pacific data shows that it has cooled. So has the South Pacific (60S-0, 120E-70W). Refer to Figures 6 and 7. Think about that for a moment. Not only has the largest ocean on this planet not warmed in agreement with the models, it’s actually cooled over the past 17 years. 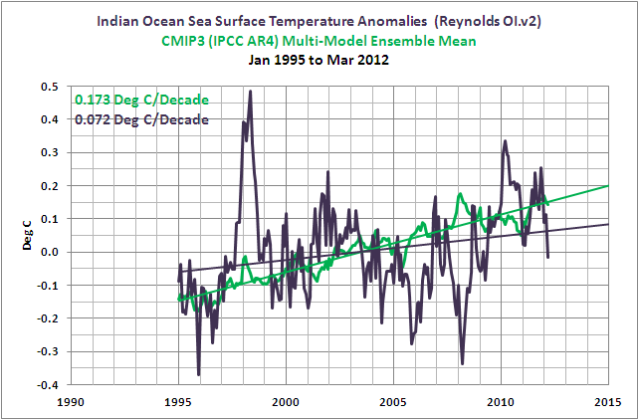 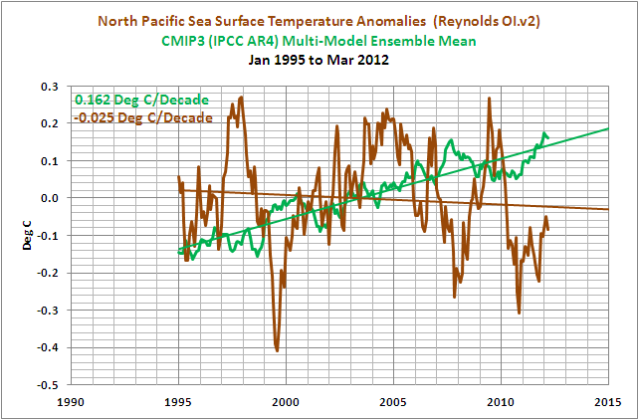 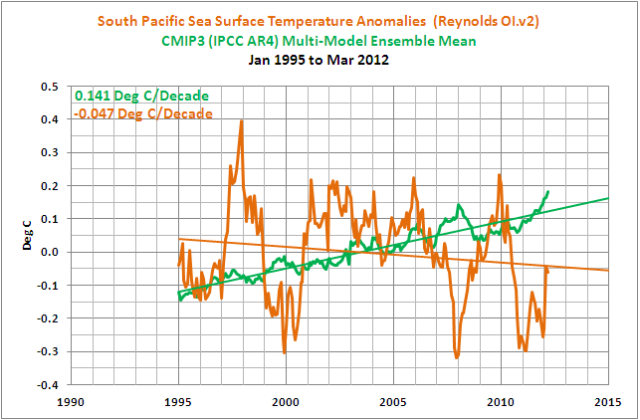 THE OTHER OCEAN BASIN THAT’S COOLING

The Southern Ocean (90S-60S) is the ocean “basin” that surrounds Antarctica. It has cooled over the 30-year term of the Reynolds OI.v2 dataset. See the graph here from this post. Since January 1995, the rate at which it’s cooling is even stronger. The difference between the rate that it’s cooling and the rate the climate models say it should be warming is 0.14 deg C/decade. 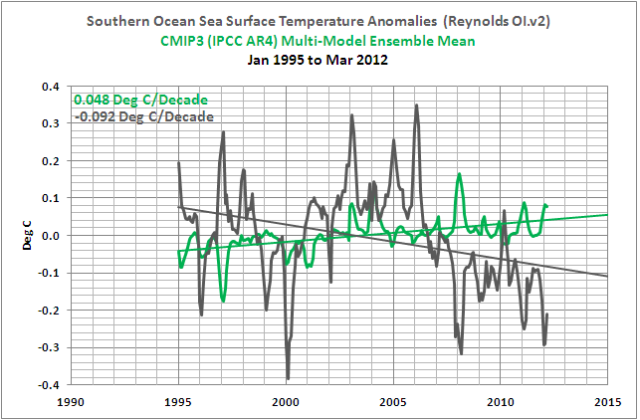 LET’S NOT FORGET THE OTHER OCEAN BASINS THAT WARMED

At the other end of the planet, the Arctic Ocean (65N-90N) has warmed over the past 17 years at a rate that’s about 2.5 times faster than the model simulations. See Figure 9. Surprisingly, we often hear from climate alarmists that the Arctic is warming faster than projected by climate models, with all of the dire consequences of that warming thrown in heighten the risks they perceive. But the doomsayers are actually heralding yet another failing of the climate models. The observations are the target the models are shooting for, and in the Arctic, the models have missed the planet the target’s nailed to. 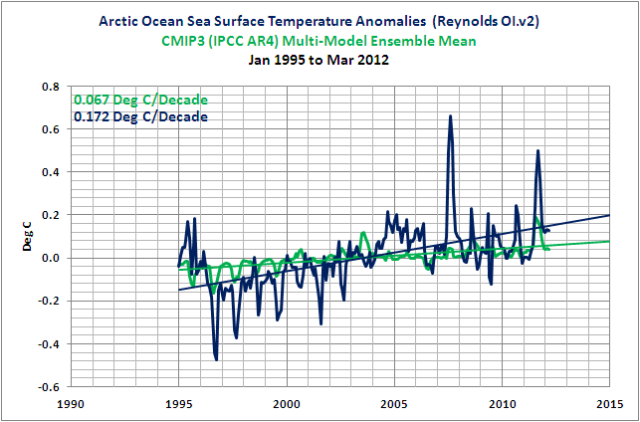 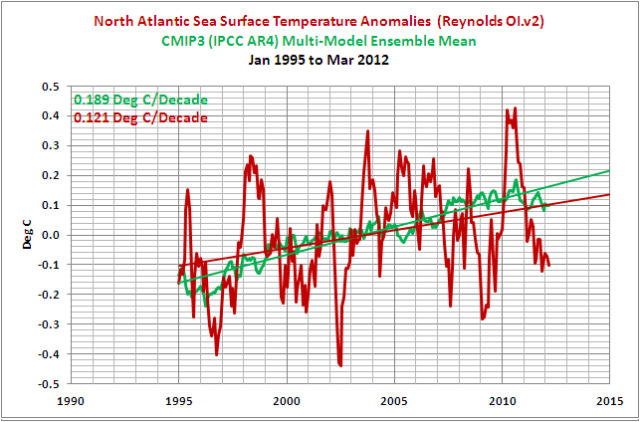 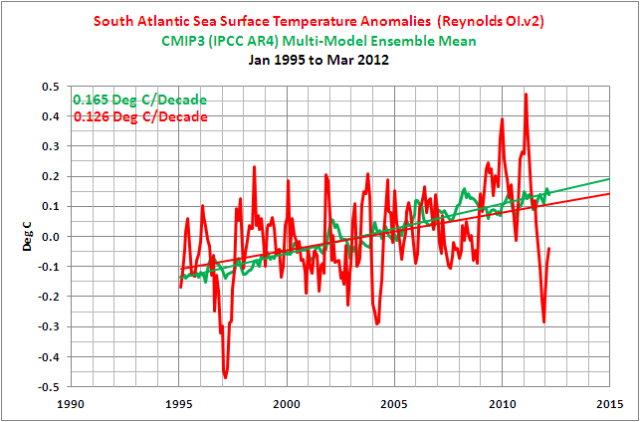 AND HOW WELL DO THE MODELS SIMULATE HEMISPHERIC AND GLOBAL SEA SURFACE TEMPERATURES?

In the Northern Hemisphere, Figure 12, according to the models, the sea surface temperatures should be warming about 3.4 times faster than has been observed for the past 17 years. The model performance in the Southern Hemisphere is even worse, Figure 13. There, the models show a warming rate that is about 8.5 times higher than the actual warming rate. In total, for the global oceans, the models have projected a warming that’s 5 times higher than the rate the oceans have actually warmed. The model trend isn’t 50% higher, not twice as high, not three times. The models are off by a factor of 5. Written another way, global sea surface temperatures have warmed at a rate over the past 17 years that’s only 20% of the rate projected by the multi-model mean of the climate models presented to the CMIP3 archive for use by the Intergovernmental Panel on Climate Change in its 4thAssessment Report published in 2007. 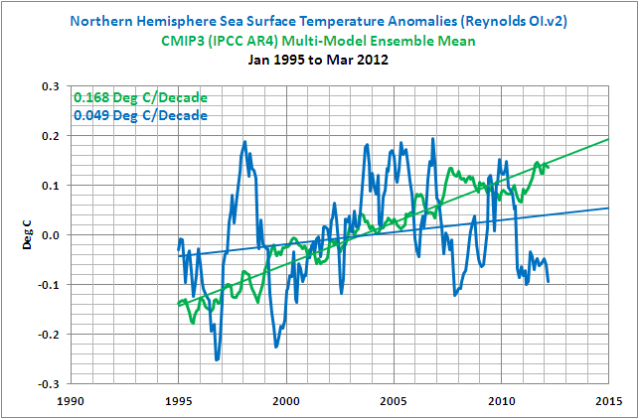 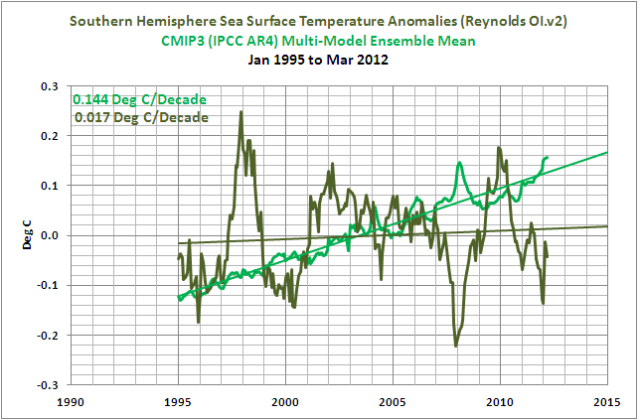 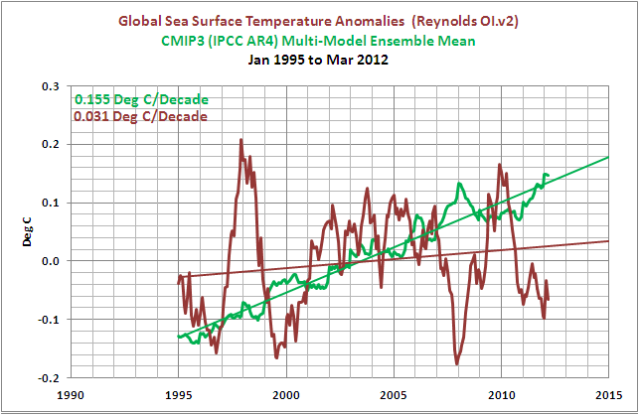 For more than a year, in posts here at Climate Observations and in cross posts at WattsUpWithThat, we have presented and discussed numerous ways in which the climate models show no skill at being able to simulate the warming, or lack thereof, of global surface temperatures. Keep in mind global surface temperature is the metric most commonly used to define global warming.

This post was primarily intended to show that 75% of the surface area of the global oceans, the Indian and Pacific Oceans from pole to pole, has not warmed in 17 years. This lack of warming opposes the continued rise in anthropogenic greenhouse gases—which only appear to make the sea surface temperatures warm consistently in climate models. There’s nothing alarming about the rate at which sea surface temperature anomalies have warmed. In fact, the 30[-year] rise in sea surface temperatures can be explained by natural factors. So the only thing that should be sounding any alarms is the lack of skill shown by the climate models. [corrected typo]

As illustrated and discussed in If the IPCC was Selling Manmade Global Warming as a Product, Would the FTC Stop their deceptive Ads?, the IPCC’s climate models cannot simulate the rates at which surface temperatures warmed and cooled since 1901 on a global basis, so their failings illustrated in this post are not abnormal.

Additionally, the IPCC claims that only the rise in anthropogenic greenhouse gases can explain the warming over the past 30 years. Satellite-based sea surface temperature disagrees with the IPCC’s claims. Most, if not all, of the 30-year rise in satellite-based global sea surface temperature is shown to be the result of a natural process called the El Niño-Southern Oscillation, or ENSO. This is discussed in detail in If the IPCC was Selling Manmade Global Warming as a Product, Would the FTC Stop their deceptive Ads?, which is available in pdf and Kindle editions. A copy of the introduction, table of contents, and closing in pdf form can be found here.

The modeled and observed sea surface temperature data presented in this post are available through the KNMI Climate Explorer:

Research interest: the long-term aftereffects of El Niño and La Nina events on global sea surface temperature and ocean heat content. Author of the ebook Who Turned on the Heat? and regular contributor at WattsUpWithThat.
View all posts by Bob Tisdale →
This entry was posted in Model-Data Comparison SST. Bookmark the permalink.

14 Responses to What Do Observed Sea Surface Temperature Anomalies and Climate Models Have In Common Over The Past 17 Years?