Last year about this time, the El Niño-Southern Oscillations (ENSO) models from around the globe predicted ENSO-neutral to El Niño conditions for the 2011/12 ENSO season. But the two siblings (El Niño and La Niña) decided that it was La Niña’s turn to alter weather patterns globally. This year, the models are predicting the same as last year: Some are predicting El Niño conditions, while others are leaning to ENSO-neutral.

So, readers, which will it be for the upcoming ENSO season: an El Niño, ENSO-neutral conditions, or a back-to-back-to-back/three-peat/triple-dip La Niña?

Don’t ask me; I don’t make predictions. But I would like to see two possible outcomes that are discussed in the closing.

Here are some visual aids to help you soothsayers with your prognostications.

Figures 1, 2 and 3 show the ENSO model forecasts from April 23, 2012 and May 9, 2011. The 2012 forecasts are from the latest NOAA/CPC ENSO Diagnostic Discussion that I downloaded on Monday April 30th. The 2011 forecasts from May 2011 are from the same website but archived on the Wayback Machine. To save you some time searching, I’ve uploaded and stored the two NOAA pdf documents at my website here (2012) and here (2011). Keep in mind the forecasts blew it last year: there was a La Niña for the 2011/12 season.

The Australia’s Bureau of Meteorology (BOM) Southern Oscillation Index (SOI) data from Jan 1982 to April 2012 is shown in Figure 5. With the SOI, El Niño events are the sustained negative spikes and the La Niña events are positive ones. The SOI is an ENSO index that represents the difference in sea level pressure between Tahiti and Darwin Australia. The BOM standardizes the data and then multiplies it by 10. The April 2012 value of -7.1 is of interest because as the BOM notes on their Glossary webpage for the SOI:

Sustained negative values of the SOI greater than −8 often indicate El Niño episodes. These negative values are usually accompanied by sustained warming of the central and eastern tropical Pacific Ocean, a decrease in the strength of the Pacific Trade Winds, and a reduction in winter and spring rainfall over much of eastern Australia and the Top End. You can read more about historical El Niño events and their effect on Australia in the Detailed analysis of past El Niño events. 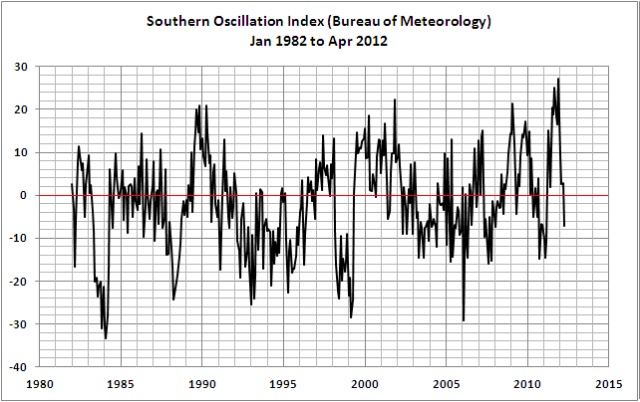 Like the SOI, El Niño events in NOAA’s trade wind index for the western equatorial Pacific (5S-5N, 135E-180)appear as prolonged downward spikes and La Niña events show up as the opposite. This is an important index because the Pacific trade winds push sunlight-warmed water in the tropical Pacific to the west; the trade winds “hold” the warm water in the western Pacific Warm Pool, where it “piles up”; and it’s a relaxation of the trade winds that allows gravity to carry the warm water from the Pacific Warm Pool to the east during an El Niño. Unfortunately, as of today (May 2, 2012) NOAA has not yet released its trade wind index data for April 2012. And as of March 2012, the trade winds in the western equatorial Pacific were still elevated. 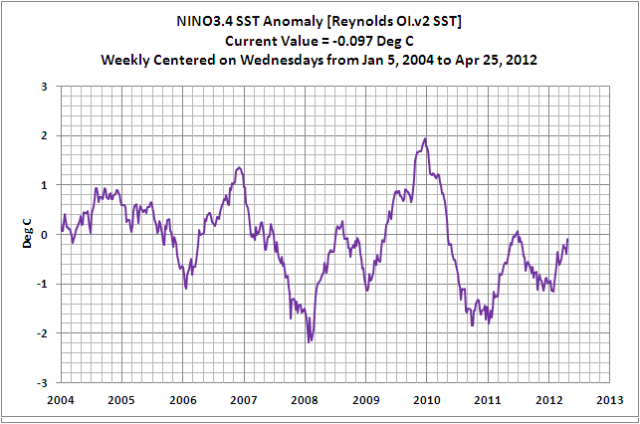 So what will it be?

Personally, I would prefer either a La Niña or a Super El Niño like the one that occurred in 1997/98. Why? I’d like to see what happens to North Atlantic sea surface temperature anomalies if there was a three-peat La Niña. Will that contribute to a downturn in the Atlantic Multidecadal Oscillation?

And with all of those ARGO buoys bobbing around in the Pacific, they would provide new insight into the multiyear aftereffects of a Super El Niño. Researchers could track the huge volume of leftover warm water that returns to the western tropical Pacific via a Rossby wave (at about 10N) . Where does all of that warm subsurface water go after it slams into Indonesia? Does it, as I suspect, reappear as secondary, central Pacific, El Niño Modoki events over the next 8 to 10 years? If so, what paths does it take? After the warm water has been returned to the west and carried poleward, how long does it release heat in the Kuroshio-Oyashio Extension and South Pacific Convergence Zone, as secondary effects of the super El Niño? How much of the warm water makes its way into the tropical Indian Ocean to influence climate there? Little questions.

INTERESTED IN LEARNING MORE ABOUT THE EL NIÑO-SOUTHERN OSCILLATION?

About one-quarter of my book If the IPCC was Selling Manmade Global Warming as a Product, Would the FTC Stop their deceptive Ads?, Section 6, is about the processes that are part of El Niño and La Niña events. Many of the discussions are rewordings (expansions and simplifications) of my posts here at Climate Observations, so you could save a few bucks and read dozens of posts. But the book provides a single resource and reference for you and includes a very basic, well-illustrated introduction to El Niño, La Niña, and ENSO-neutral conditions written in simple terms. Included in the ENSO section are discussions of how La Niña events are not the opposite of El Niño events and how and why certain parts of the global oceans warm in response to certain El Niño AND to the La Niña events that follow them. The El Niño-Southern Oscillation is a marvelous process Mother Nature has devised to enhance or slow the distribution of heat from the tropics to the poles. It is process that naturally varies in intensity, and due to those variations, it is capable of warming or cooling global temperatures over multiyear and multidecadal periods. The individual chapter titles of Section 6 will give you an idea of the topics discussed. See pages 9 and 10 of the introduction, table of contents, and closing of my book in pdf form here.

All but the source of the sea surface temperature data are linked in the text of the post.  The Reynolds (OI.v2) SST anomaly data is available through the NOAA NOMADS website: