Dana1981 at SkepticalScience Tries to Mislead His Readers

UPDATE 1 (June 2, 2012):  Figures 7 and 8 in this post present data from an Ocean Heat Content anomaly dataset called UKMO EN3 that was available from the KNMI Climate Explorer for only a short time—a few weeks.   I’ve discussed the dataset in the post UKMO EN3 Ocean Heat Content Anomaly Data Disappeared From The KNMI Climate Explorer As Suddenly As It Appeared.  Please refer to it.  As a general rule of thumb, all ocean heat content datasets have to be taken with a large grain of salt. There are simply too many problems with sensors (ARGO floats and XBTs), too many corrections, and before the ARGO era, the data is too sparse.  The further back in time one looks, the more an ocean heat content dataset become a Northern Hemisphere dataset.  But the uncorrected UKMO EN3 ocean heat content data used in Figures 7 and 8 have to be taken with an especially large grain of salt.

In this post, I’ll simply respond (once again) to complaints about that graph.

Dana1981’s initial reference to my graph comes in the opening sentence of his post. It reads:

Recently there have been a number of claims of a large discrepancy between modeled and observed ocean heat content (OHC), for example by Roger Pielke Sr., David Evans, and Bob Tisdale.

The post he linked was the WattsUpWithThat cross post of my most recent quarterly NODC Ocean Heat Content (OHC) update titled October to December 2011 NODC Ocean Heat Content Anomalies (0-700Meters) Update and Comments. The only model-data comparison graph in that post is Figure 1. So that simple graph is the only one he chooses to complain about.

Dana1981 uses the ridiculous heading of “Inaccurate, Unskeptical Graphs”. First, there’s nothing inaccurate about my graphs in general or Figure 1 specifically. The data for Figure 1 is available through the KNMI Climate Explorer, and the model projection is based on Hansen et al (2005). I include a detailed description of that graph in that post. Second, I’m not sure how unskeptical applies to a graph. Unskeptical according to MS Word means open minded. Whatever Dana1981 was yakking about, it’s nonsense. Figure 1 is an accurate presentation of the model projection and the data.

Dana1981 then goes on to write under that heading:

The first cherrypicks have already been discussed above – ignoring OHC below 700 meters, and ignoring the OHC increase prior to 2003.

Figure 1 appears in my post under the heading of “ARGO-ERA OCEAN HEAT CONTENT MODEL-DATA COMPARISON.” That limits the period of discussion, don’t ya think? There’s really no reason to include OHC data prior to 2003 in a graph of ARGO-era OHC data since ARGO floats had such poor coverage before then.

Dana1981 claims that presenting the NODC 0-700 meter OHC data is cherry-picking, apparently believing the NODC’s OHC data for depths of 0-2000 meters should be illustrated as well. There’s a very obvious problem with that logic, and Dana1981 fails to recognize it. The Hansen et al (2005) paper “Earth’s energy imbalance: Confirmation and implications” has been the reference all along in my series of OHC updates. It presents the NODC OHC data for 0-700 meters, not 0-2000 meters. Dana1981 even uses Figure 2 from Hansen et al (2005) as Figure 1 in his post.

Dana1981 then posts a graph from Tamino that represents the problems Dana1981 sees with my model-data presentation in Figure 1. We’ll overlook the obvious difference, which is that he’s looking at annual data and I’ve presented the data on a monthly basis. I’ve added a couple of notes to the SkepticalScience Figure 4 and posted that graph here as Figure 2. My graph in Figure 1 presents the extrapolated trend of the model mean. Tamino’s graph presents the trend for the annual Ocean Heat Content data, not the model mean. He also elected to show a trend for the data for the period of 1993 to 2002. But the period used in the Hansen et al (2005) paper that Dana1981 referenced was 1993 to 2003. The only reason to omit the 2003 data point is because the trend is lower without it. Then Dana1981 notes:

By choosing the baseline such that the models and data are equal in 2003, Tisdale and Evans have graphically exaggerated a model-data discrepancy.

So the point where the trend meets the data is Dana1981’s basic complaint. Yawn. Somehow in Dana1981’s mind the intercept makes the graph inaccurate and unskeptical. Dana1981 linked Tamino’s post Favorite Denier Tricks, or How to Hide the Incline, but he failed to also link my rebuttal here or the WUWT cross post Technical paper training for “Hansen’s Bulldog”. Dana1981 also failed to realize how the Corrections to the RealClimate Presentation of Modeled Global Ocean Heat Content impacted Tamino’s unfounded criticisms. So I’d better point it out to him.

Where should the model intersect with the data? Let’s take a look.

Dana1981 uses the uproariously funny heading of “Accurate Graph”. Dana1981 then presents the corrected RealClimate graph that compares model outputs and OHC data. The graph is from the RealClimate post OHC Model/Obs Comparison Errata. Yup, that was the first time in two and a half years that RealClimate posted an “accurate graph” in one of their OHC model-data comparisons. I’m not sure Gavin Schmidt liked being reminded of that fact by Dana1981, but I sure appreciated it. I’ve reposted the graph here and thrown on another question for Dana1981. It is: Where would an extrapolation of the model mean trend (1993-2003) intersect the NODC OHC data, Dana1981?

Gavin Schmidt was kind enough to post the answer to my question. He provided it when he corrected the OHC model-data comparison graph in his post 2011 Updates to model-data comparisons. See Figure 4. I’ve noted the answer on the graph. They don’t intersect. In my graph, Figure 1, the model and data at least intersect during the ARGO era but in the RealClimate graph that Dana1981 calls an “accurate graph” they don’t intersect. Would you rather I shifted the model trend to the left, away from the OHC data, Dana1981? Would that make it an “accurate graph” for you?

Figure 5 is the same OHC model-data comparison graph from RealClimate. In it, though, I’ve highlighted the ARGO era, which is the period I presented in Figure 1. I removed the NODC data for 0-2000 meters since it has no bearing on this discussion. I’ve also approximated Tamino’s linear trend of the NODC OHC data from 1993 to 2002 that Dana1981 would like us to believe represents the model mean. Does Tamino’s linear trend come close to representing the model mean? Nope! For some reason, things that are blatantly obvious to most of us elude Dana1981 and his cohorts at SkepticalSeance.

What Dana1981 failed to realize is, when Tamino pulled the two sleights of hand with that graph (using the data instead of the model mean and using the trend of the data from 1993 to 2002 instead of 1993 to 2003), the erroneous data that RealClimate was posting at the time, Figure 6, was aligning with the bogus Tamino trend. That erroneous model trend only made it appear that Tamino’s presentation was right. But it never was. 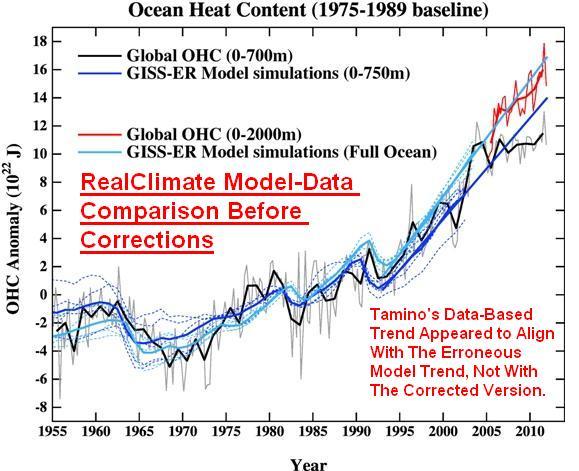 I was going to overlook Dana1981’s complaint that I was neglecting a raft of other sources of OHC data, but I’ve decided to respond to it. I use the KNMI Climate Explorer as the source of data for my quarterly Ocean Heat Content updates. That fact is discussed in the first few paragraphs of those OHC updates. It’s tough to miss it, being right up front. I use data that’s readily available from KNMI in my posts for a reason: so that anyone can reproduce my graphs. Up until a few weeks ago, the NODC Ocean Heat Content data for 0-700 meters was the only updated Ocean Heat Content dataset available at the KNMI Climate Explorer. I would have been more than happy to include other OHC datasets, but there haven’t been any—until recently.

KNMI recently added an Ocean Heat Content dataset based on the UK Met Office EN3 analysis. I haven’t really investigated that dataset in depth (pardon the pun) so I haven’t prepared a full post about it. Figure 7 compares the UKMO EN3 data to the NODC ARGO-era OHC data for 0-700 meters and also to the GISS model trend. The UKMO EN3 data appears similar to the NODC’s ARGO-era OHC data before the NODC’s 2010 modifications. I’ll confirm that in an upcoming post. If you haven’t noticed, the trend of the ARGO-era UKMO EN3 OHC data (0-700 meters) is negative from January 2003 to March 2012. 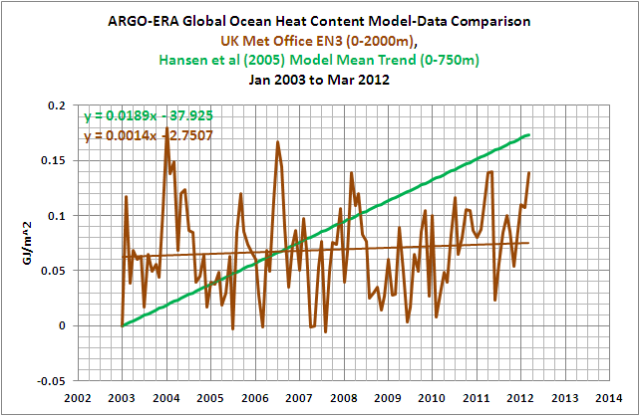 When Gavin Schmidt published those corrections to the RealClimate OHC model-data comparisons, I believed that no one would be foolish enough to ever again complain about where the OHC model trend and data intersected in my ARGO-era graphs. But I was proved wrong. Dana1981 raised the bar on foolishness. And his readers went along with it.

Roger Pielke Sr. also published a post yesterday about Dana1981’s OHC post. Roger’s post is titled Grappling With Reality – A Comment On The Skeptical Science Post By Dana1981 “Modeled and Observed Ocean Heat Content – Is There a Discrepancy?”  Yup, Dana1981 and many of the commenters on that SkepticalScience thread are grappling with reality, but they’re losing the wrestling match.

By the way, Dana1981, thanks for allowing me to post the ARGO-era model-data comparison graph once again. It’s one of my favorites.

Research interest: the long-term aftereffects of El Niño and La Nina events on global sea surface temperature and ocean heat content. Author of the ebook Who Turned on the Heat? and regular contributor at WattsUpWithThat.
View all posts by Bob Tisdale →
This entry was posted in CAGW Proponent Arguments, Ocean Heat Content Problems. Bookmark the permalink.

27 Responses to Dana1981 at SkepticalScience Tries to Mislead His Readers