This post will serve as the Preliminary Sea Surface Temperature Anomaly Update for June 2012, since we’ll be using preliminary June 2012 data in it. Last week ended on June 30th, so the preliminary data should be close to the official June data, which does not come out until Monday July 9, 2012. Refer to the schedule on the NOAA Optimum Interpolation Sea Surface Temperature Analysis Frequently Asked Questions webpage.

Anthony Watts often starts a post with, “I get mail.” And sometimes I get mail from Anthony Watts. This post takes a look at the curious sea surface temperature anomaly patterns Anthony and Roger Sowell expressed interest in.

Many people, including me, have the Unisys daily maps of sea surface temperature anomalies as one of their browser favorites. Figure 1 shows the map dated July 1, 2012. I also take a look at the Unisys sea surface temperature anomaly animation at least once a week. As of today, there’s cool waters flowing toward the central tropical Pacific out of the North Pacific, and in the northeastern South Pacific, there’s the pocket of warm waters off the coast of South America feeding northward. This will be an interesting El Niño to watch.

The map shows very low sea surface temperature anomalies in the Bering Sea. For those of you who don’t recall where the Bering Sea is, it’s south of the Bering Strait between Alaska and Russia and north of the Aleutian Island chain. In the eastern North Pacific, there’s a pattern that many would consider a negative Pacific Decadal Oscillation (PDO) spatial pattern. Toward the west, though, during a negative PDO pattern one would expect positive anomalies in the western boundary current extension east of Japan called the Kuroshio-Oyashio Extension or KOE. But the typical PDO pattern that people look for is stronger in boreal winter. Right now the North Pacific is transitioning from the aftereffects of the 2011/12 La Niña to the upcoming El Niño.

And that’s consistent with the entire North Pacific, Figure 3. Sea surface temperature anomalies, based on the smoothed curve, peaked there in 2004/05 and have been cooling since–with an ENSO-related wiggle or three. And the North Pacific is a big chunk o’ water.

Referring back to the map in Figure 1, over in the North Atlantic, there’s that trough of cool anomalies.  It stretches northeast from the Gulf of Mexico to the North Sea and Baltic Sea. I don’t recall that pattern in any of the sea surface temperature anomaly animations I’ve created. Then again, most of those have been based on the Reynolds OI.v2 data, which start in November 1982. I took another look at the animation of Global sea surface temperature anomalies I had prepared three years ago that’s posted on YouTube. I didn’t see that same cool trough in the North Atlantic. And I had used a contour interval of 0.2 deg C in the animation to make patterns like the trough stand out. That doesn’t mean the cool trough hasn’t existed before; it just hasn’t shown itself (or shown itself as clearly?) in the last 30 years. 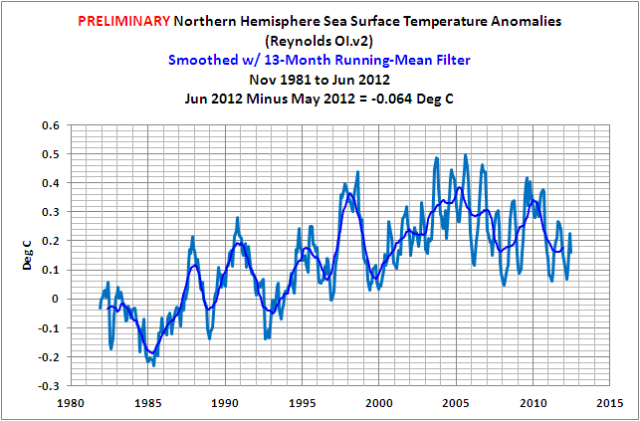 Figure 12 is a graph of weekly Global sea surface temperature anomalies centered on Wednesday June 27th. They’re making their wiggly transition from their responses to the La Niña and to the upcoming El Niño. Something stands out for me in Figure 12 and in the monthly global sea surface temperature anomalies, Figure 9. Note how the La Niña-related seasonal minimum straddling 2011/12 is noticeably cooler than the seasonal minimum of 2010/11. Yet the 2010/11 La Niña was much stronger than the 2011/12 La Niña. 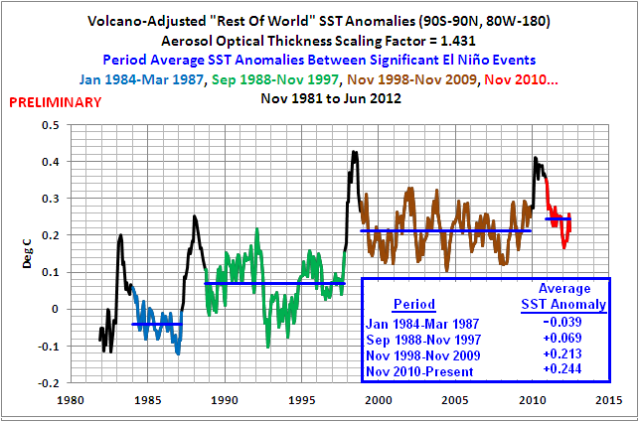 WOULD YOU LIKE TO UNDERSTAND WHY THE ATLANTIC-INDIAN-WEST PACIFIC DATASET SHIFTS UPWARD IN RESPONSE TO MAJOR EL NIÑO EVENTS?

Over the past three years, in so many posts it’s not practical to link them here, I’ve presented the El Niño-Southern Oscillation (ENSO)-related processes that cause the blatantly obvious upward shifts in sea surface temperature anomalies for the Atlantic, Indian and West Pacific data shown above. I’ve also explained why the East Pacific shows no warming over the past 30 years. You’re welcome to use the search function on this webpage.

In my upcoming book, I go into lots more detail about how ENSO causes those upward shifts. I’m hoping to publish it in late July, early August of this year. The only things slowing down the process are the new chapters I’ve added under the section of general ENSO discussions, and those are discussions I have not posted on my blog.