I was visiting family in the Northeast U.S. when Sandy came ashore, so I was without power for most of last week. Since my return home, I’ve been catching up with all of the nonsense surrounding Hurricane/Extratropical Storm/Hybrid Storm Sandy. There have been hundreds of articles and blog posts that include references to climate change, global warming, and the warming oceans and their assumed impacts on Sandy. Yet no one has bothered to plot the long-term sea surface temperature anomalies for Sandy’s track. So we’ve had lots of baseless claims. Will the authors of those posts and articles feel foolish when they discover sea surface temperatures for Sandy’s path haven’t warmed in 70+ years? For those reading this post, who have access to the authors of those articles or the blog posts, feel free to leave them a link or two to this post.

The most absurd claim was made by Brian Reynolds in his post How a Warm Earth fueled Hurricane Sandy at The Energy Collective, which heralds itself as “The world’s best thinkers on energy and climate”. It was the topic of discussion in the post Frankenstorm-itis: Five degrees of Separation from Reality and Eleventy Gazillion Joules Under the Sea by David Middleton at WattsUpWithThat.

Apparently the “world’s best thinkers on energy and climate” rely on thought and not on data, because Brian Reynolds’s preposterous claim is clearly fantasy:

Oy! Five degrees. He must believe most of us were born just after the last glacial period. That’s older than Mel Brooks’ 2000 Year Old Man.

What could that “best thinker” have been thinking? Then when he was questioned about it, Brian Reynolds wrote in a comment:

The point of this piece isn’t the exact temperature of the ocean, which is admittedly hard to calculate (You’ll note in reading one other comments that you don’t agree with me or one another after all) but rather that the earth isn’t a closed system.

Actually, Brian, you can’t dismiss your error and state that it’s pointless. You wouldn’t have written what you wrote if you thought it was pointless. Also, sea surface temperature data is available to the public through multiple resources (NOAA’s NOMADS website or the KNMI Climate Explorer) so there are no calculations involved. All you have to do is enter coordinates and the websites produce the data. If you had done that with a long-term sea surface temperature dataset like the Hadley Centre’s HADISST, you would have discovered that the sea surface temperatures anomalies of Sandy’s storm track (12N-40N, 80W-70W) haven’t warmed since 1938, when the another super storm hit the Northeast U.S. See Figure 1. 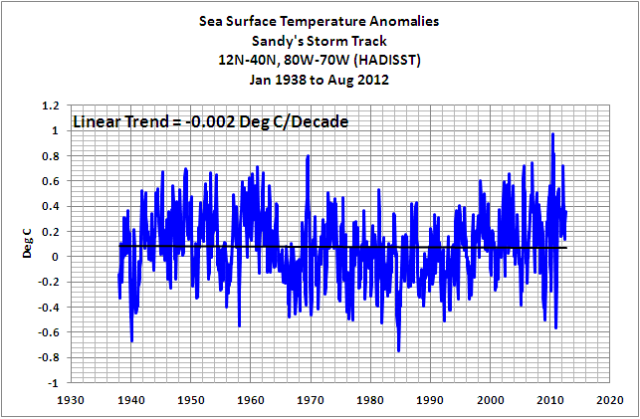 The coordinates are based on the storm-track map from the Jacksonville.com, which I’ve annotated in Figure 2. 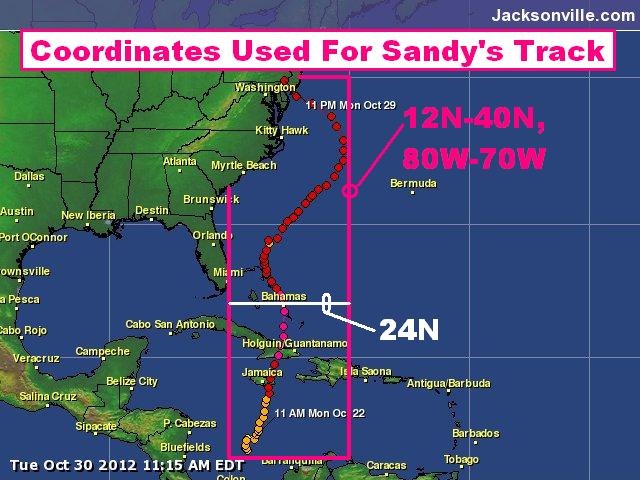 For the extratropical portion of the path (24N-40N, 80W-70W), Figure 3, the sea surface temperature anomalies have actually cooled since 1938. It’s not a great deal of cooling, but the trend is clearly negative. 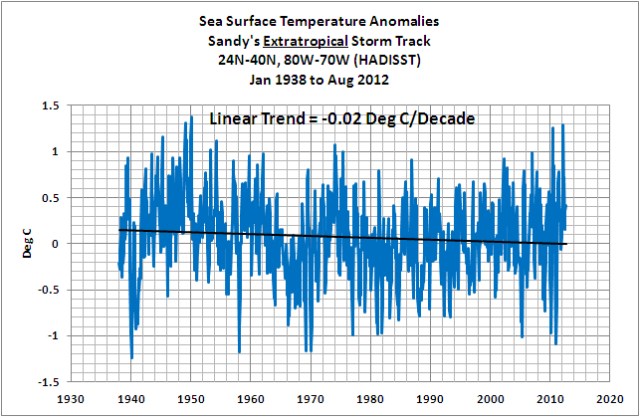 I’ve recently published an e-book (pdf) about the phenomena called El Niño and La Niña. It’s titled Who Turned on the Heat? with the subtitle The Unsuspected Global Warming Culprit, El Niño Southern Oscillation. It is intended for persons (with or without technical backgrounds) interested in learning about El Niño and La Niña events and in understanding the natural causes of the warming of our global oceans for the past 30 years. Because land surface air temperatures simply exaggerate the natural warming of the global oceans over annual and multidecadal time periods, the vast majority of the warming taking place on land is natural as well. The book is the product of years of research of the satellite-era sea surface temperature data that’s available to the public via the internet. It presents how the data accounts for its warming—and there are no indications the warming was caused by manmade greenhouse gases. None at all. The same holds true for Ocean Heat Content data. The warming of the global oceans to 700 meters since 1955 can also be easily explained through natural variables.

Who Turned on the Heat? was introduced in the blog post Everything You Every Wanted to Know about El Niño and La Niña… …Well Just about Everything. The Updated Free Preview includes the Table of Contents; the Introduction; the beginning of Section 1, with the cartoon-like illustrations; the discussion About the Cover; and the Closing.

Please buy a copy. (Credit/Debit Card through PayPal—you don’t need a PayPal account). It’s only US$8.00.

You’re probably asking yourself why you should spend $8.00 for a book written by an independent climate researcher. There aren’t many independent researchers investigating El Niño-Southern Oscillation or its long-term impacts on global surface temperatures. In fact, if you were to perform a Google image search of NINO3.4 sea surface temperature anomalies, the vast majority of the graphs and images are from my blog posts. Try it. Cut and paste NINO3.4 sea surface temperature anomalies into Google. Click over to images and start counting the number of times you see Bob Tisdale.

By independent I mean I am not employed in a research or academic position; I’m not obligated to publish results that encourage future funding for my research—that is, my research is not agenda-driven. I’m a retiree, a pensioner, with a background in fluid dynamics. The only funding I receive is from book sales and donations at my blog. Also, I’m independent inasmuch as I’m not tied to consensus opinions so that my findings will pass through the gauntlet of peer-review gatekeepers. Truth be told, it’s unlikely the results of my research would pass through that gauntlet because the satellite-era sea surface temperature data contradicts the tenets of the consensus.

The Sea Surface Temperature anomaly data used in this post is available through the KNMI Climate Explorer website.

Research interest: the long-term aftereffects of El Niño and La Nina events on global sea surface temperature and ocean heat content. Author of the ebook Who Turned on the Heat? and regular contributor at WattsUpWithThat.
View all posts by Bob Tisdale →
This entry was posted in Weather Event Hype. Bookmark the permalink.