In numerous past posts, we’ve compared observed surface temperature data to the simulations of it by the climate models used by the Intergovernmental Panel on Climate Change (IPCC) for their 4th (2007) and 5th (upcoming) assessment reports. Refer to the examples here, here, here and here. The climate models showed no skill at being able to simulate past global or regional temperatures. This of course should lead persons to question the IPCC projections of future global warming. If the models can’t simulate the past, there’s no reason to believe their projections. And we’ve also discussed that there is no evidence that manmade greenhouse gases were responsible for the warming of global sea surface temperatures over the past 31 years (the satellite era of sea surface temperature data) or for the warming of ocean heat content data since 1955. See Parts 1 and 2 of the video series The Natural Warming of the Global Oceans.

In this post, we’ll be looking at the satellite-era precipitation on global and regional bases. The observations-based dataset is NOAA’s CAMS-OPI. It is a merged dataset based on ground-based rain gauge observations from the Climate Anomaly Monitoring System (CAMS) and based on satellite rainfall estimates from the Outgoing Longwave Radiation (OLR) Precipitation Index (OPI). It has global (pole to pole) coverage, with a resolution of 2.5 X 2.5 deg longitude and latitude. The dataset runs from January 1979 to present. We’ll compare those observations to the multi-model ensemble mean of the precipitation simulations from climate models stored in the CMIP5 archive. That’s the archive used by the IPCC for its upcoming 5th Assessment Report. I’ve used the RCP6.0 scenario outputs, which are very similar to the SRES A1B scenario that was well-cited in past IPCC reports. The CAMS-OPI precipitation data and the outputs of the climate model simulations of precipitation are available through the KNMI Climate Explorer.

And what processes are climate modelers still unable to simulate? That’s right, ENSO. There is something else, though, with a strong influence on global precipitation—as you shall see.

Figure 1 is a time-series graph that compares the multi-model mean of the simulations of global surface air temperature and precipitation from January 1979 to November 2012. The temperature data has been scaled by a factor of 0.05 for easier visual comparison. The models simulate that manmade greenhouse gases cause global surface air temperatures to warm AND global precipitation to increase. The dips and rebounds associated with volcanic eruptions of El Chichon in 1982 and Mount Pinatubo in 1991 stand out like sore thumbs in both the modeled temperature and the precipitation. All in all, it would seem to be a fair guess that the modelers are assuming that global precipitation will increase as temperatures increase. 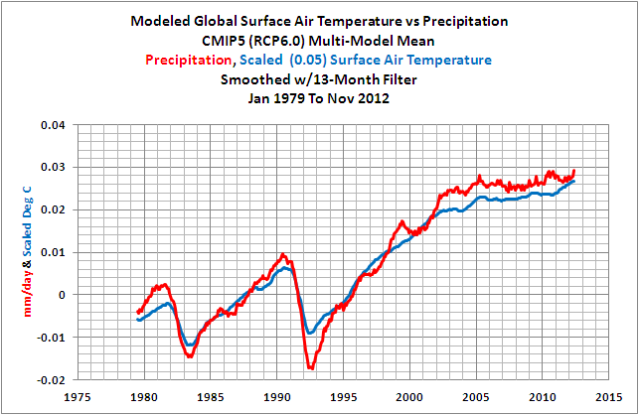 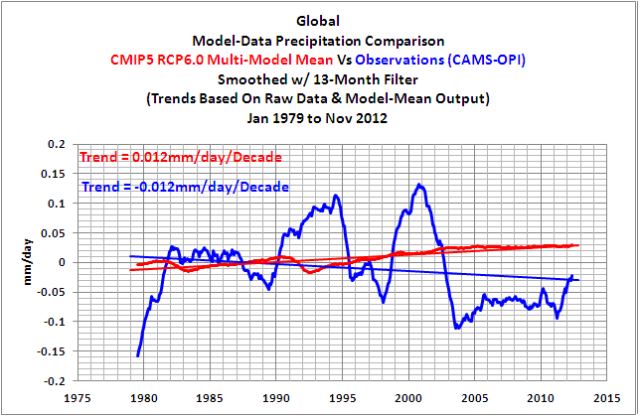 ENSO IS THE PRIMARY CAUSE OF GLOBAL PRECIPITATION VARIABILITY

Looking at the data in Figure 2, it’s tough to imagine that El Niños and La Niñas (formally known as El Nino-Southern Oscillation or ENSO events) are the primary causes of the year-to-year variations in global precipitation. I’ve divided the global precipitation data into subsets based on the following correlation map, Figure 3. In the map, global precipitation is correlated with a commonly used index for the timing, strength and duration of El Niño and La Niña events (NINO3.4 region sea surface temperature anomalies). Tropical precipitation has a very strong negative correlation with that ENSO index in the East Indian and West Pacific region, so I’ve isolated that region, from pole to pole (90S-90N, 80E-150E). There’s a very strong positive correlation with the ENSO index in the central tropical Pacific, so I’ve captured it with the coordinates of 90S-90N, 80E-150E. As opposed to breaking the rest of the data down into more subsets, I’ve simply grouped the East Pacific, Atlantic and West Indian into one region (90S-90N, 150W-80E). For the most part, this large area displays a positive correlation with the ENSO index, but it’s not as strong as the other two regions. 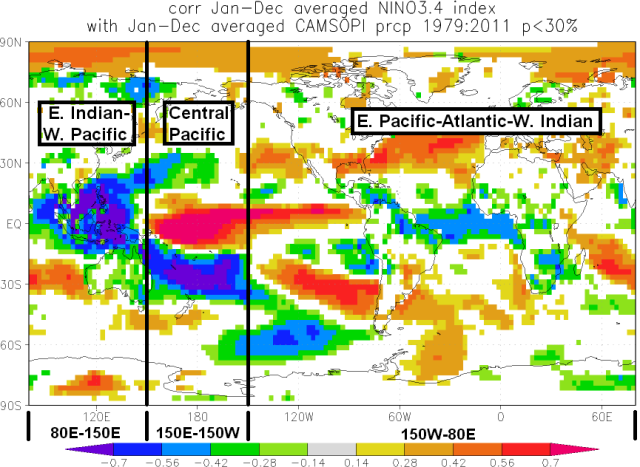 NOTE: While the subsets in the following graphs are identified by oceans, the data also includes the land precipitation within the coordinates. In other words, the East Indian and West Pacific region includes precipitation data for Australia, a chunk of Asia and the corresponding portion of Antarctica. Likewise, the East Pacific, Atlantic and West Indian region includes the precipitation data for the Americas, Africa, Europe, western Asia and its portion of Antarctica. The Central Pacific region captures New Zealand, Alaska, and small portions of Siberia and Antarctica. As you can see in the map, there are different correlations within the regions; that is, I am not representing that the precipitation within each region varies in unison—I’m simply trying to capture the major variations by using these subsets.

Figure 4 compares the precipitation anomalies for the three regions. I’ve provided this graph to give you an idea of the relative magnitudes of the variations. 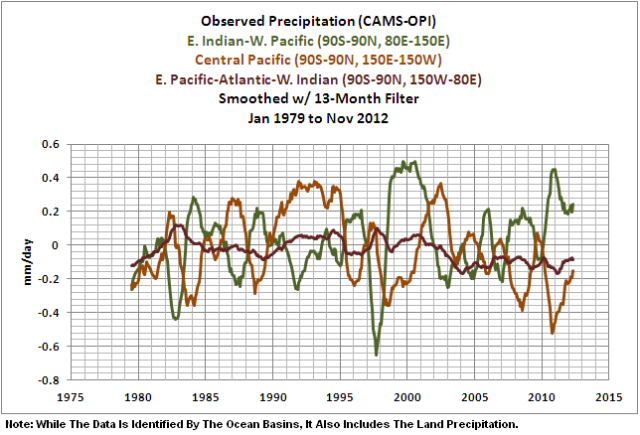 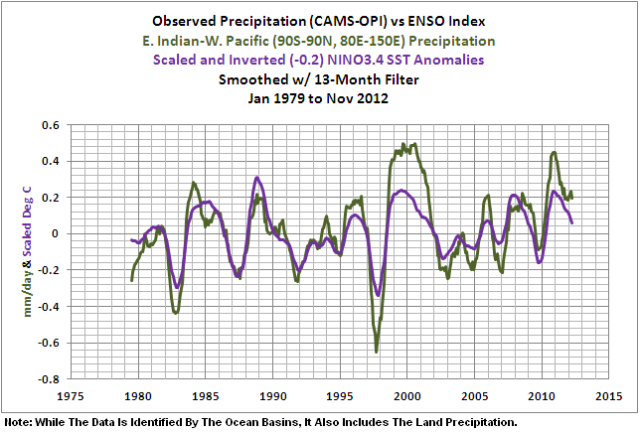 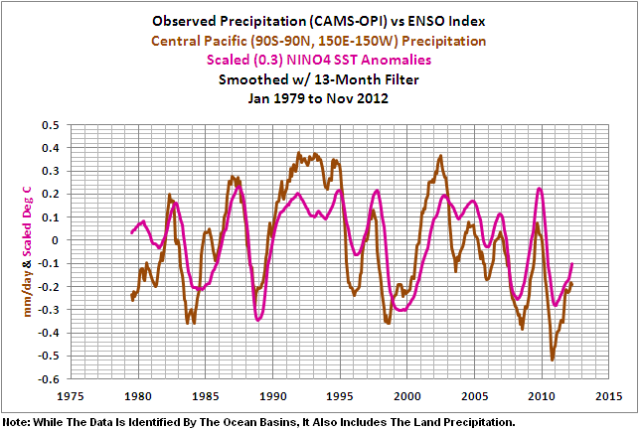 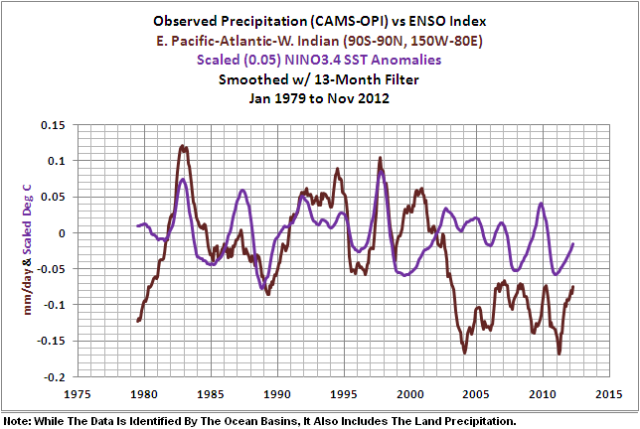 I’ve never seen that shift discussed anywhere—then again, I don’t often study precipitation data. I checked to see if it could be attributed to the Indian Ocean Dipole, but that data didn’t seem to fit.

For those interested, Figures 8 to 10 compare the regional precipitation data to the multi-model mean of the simulations prepared for the IPCC’s upcoming 5th Assessment Report (AR5).

For the East Indian-West Pacific region, which also includes Australia, a chunk of Asia and a portion of Antarctica, the models have simulated little change in precipitation over the past 34 years, Figure 8. But the precipitation in this region has increased. 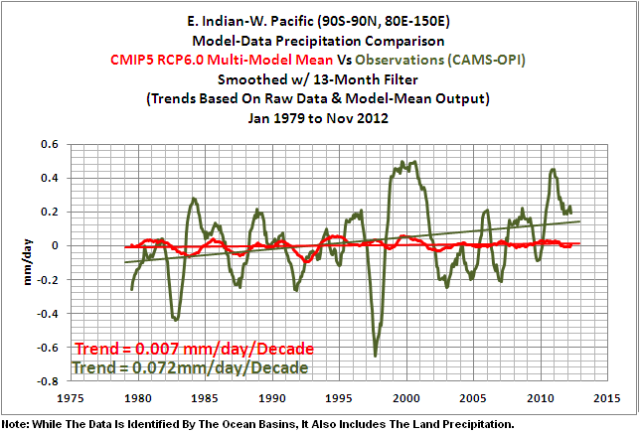 The Central Pacific region also includes New Zealand, Alaska, and small portions of Siberia and Antarctica. See Figure 9. The climate models show a significant increase in precipitation in this region while the data indicates precipitation decreased. 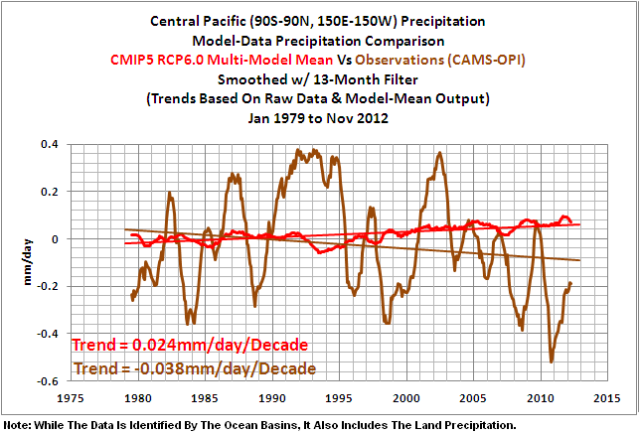 Last, Figure 10, the Americas, Africa, Europe, western Asia and the portion of Antarctica are included in the East Pacific-Atlantic-West Indian data. Climate models once again show precipitation should be increasing significantly with the rise in manmade greenhouse gases, but the data shows a decline in precipitation. 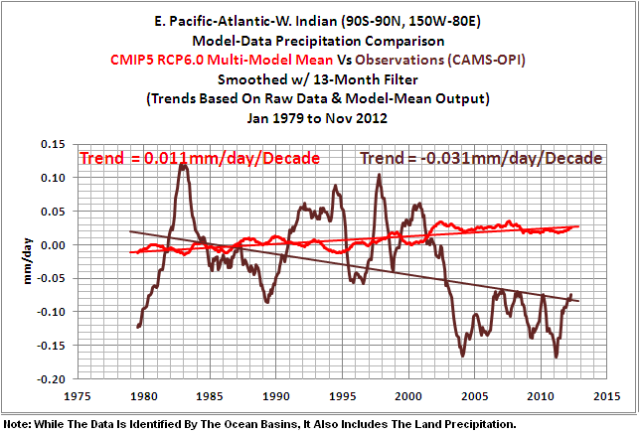 Like surface temperatures, the climate models exhibit no skill at being able to simulate precipitation throughout the globe.

ON THE USE OF THE MODEL MEAN

We’ve published numerous posts that include model-data comparisons. If history repeats itself, proponents of manmade global warming will complain in comments that I’ve only presented the model mean in the above graphs and not the full ensemble. In an effort to suppress their need to complain once again, I’ve borrowed parts of the discussion from the post Blog Memo to John Hockenberry Regarding PBS Report “Climate of Doubt”.

The model mean provides the best representation of the manmade greenhouse gas-driven scenario—not the individual model runs, which contain noise created by the models. For this, I’ll provide two references:

The first is a comment made by Gavin Schmidt (climatologist and climate modeler at the NASA Goddard Institute for Space Studies—GISS). He is one of the contributors to the website RealClimate. The following quotes are from the thread of the RealClimate post Decadal predictions. At comment 49, dated 30 Sep 2009 at 6:18 AM, a blogger posed this question:

Any single realisation can be thought of as being made up of two components – a forced signal and a random realisation of the internal variability (‘noise’). By definition the random component will uncorrelated across different realisations and when you average together many examples you get the forced component (i.e. the ensemble mean).

To paraphrase Gavin Schmidt, we’re not interested in the random component (noise) inherent in the individual simulations; we’re interested in the forced component, which represents the modeler’s best guess of the effects of manmade greenhouse gases on the variable being simulated.

The second reference is a similar statement by the National Center for Atmospheric Research (NCAR). I’ve quoted the following in numerous blog posts and in my recently published ebook. Sometime over the past few months, NCAR elected to remove that educational webpage from its website. Luckily the Wayback Machine has a copy. NCAR wrote on that FAQ webpage that had been part of an introductory discussion about climate models (my boldface):

Averaging over a multi-member ensemble of model climate runs gives a measure of the average model response to the forcings imposed on the model. Unless you are interested in a particular ensemble member where the initial conditions make a difference in your work, averaging of several ensemble members will give you best representation of a scenario.

In summary, we are not interested in the models’ internally created noise, and we are not interested in the results of individual responses of ensemble members to initial conditions. So, in the graphs, we exclude the visual noise of the individual ensemble members and present only the model mean, because the model mean is the best representation of how the models are programmed and tuned to respond to manmade greenhouse gases.

1. The climate models prepared for the upcoming 5th Assessment Report show no skill whatsoever at being able to simulate satellite-era precipitation on global or regional bases. The models simulate an increase in precipitation globally over the past 34 years, but global precipitation decreased. In other words, the modelers have wrongly assumed that increases in manmade greenhouse gases will result in more global precipitation.

3. There are additional factors that can cause significant multiyear shifts in regional precipitation. Until the time that climate modelers can anticipate those factors, their projections will have little value.

The precipitation data and model outputs are available to the public through the KNMI Climate Explorer.

SHAMELESS PLUG – INTERESTED IN LEARNING MORE ABOUT THE EL NIÑO AND LA NIÑA AND THEIR LONG-TERM EFFECTS ON GLOBAL SEA SURFACE TEMPERATURES?

As shown in this post, El Niño and La Niña events are the primary causes of regional precipitation variability throughout the globe. (The ENSO-related comparison graphs in this post are new. They were not presented in my book discussed in this section.)

Who Turned on the Heat?was introduced in the blog post Everything You Ever Wanted to Know about El Niño and La Niña… …Well Just about Everything. The Free Preview includes the Table of Contents; the Introduction; the beginning of Section 1, with the cartoon-like illustrations; the discussion About the Cover; and the Closing. The book was updated recently to correct a few typos.

For those who’d like a more detailed preview of Who Turned on the Heat?, see Parts 1 and 2 of the video series The Natural Warming of the Global Oceans. You may also be interested in the video Dear President Obama: A Video Memo about Climate Change.

Research interest: the long-term aftereffects of El Niño and La Nina events on global sea surface temperature and ocean heat content. Author of the ebook Who Turned on the Heat? and regular contributor at WattsUpWithThat.
View all posts by Bob Tisdale →
This entry was posted in Model-Data Comparison Precipitation. Bookmark the permalink.