The December 2012 Reynolds OI.v2 Sea Surface Temperature (SST) data through the NOAA NOMADS website won’t be official until Monday, January 6th 2013. Refer to the schedule on the NOAA Optimum Interpolation Sea Surface Temperature Analysis Frequently Asked Questions webpage. The following are the preliminary Global and NINO3.4 SST anomalies for December 2012 that the NOMADS website prepares based on incomplete data for the month. I’ve also included the weekly data through the week centered on December 26, 2012, but I’ve shortened the span of the weekly data, starting it in January 2004, so that the variations can be seen.

The sea surface temperature anomalies of the NINO3.4 region in the eastern equatorial Pacific (5S-5N, 170W-120W) are a commonly used index for the strength, frequency, and duration of El Niño and La Niña events. Based on the preliminary data, December 2012 NINO3.4 SST anomalies are at +0.004 deg C, basically zero, after the bottom dropped out of the El Niño conditions last month.

The preliminary global SST anomalies cooled slightly (-0.033 deg C) in the last month, probably a lagged response to the drop in the sea surface temperatures along the eastern equatorial Pacific. They’re presently at +0.21 deg C, but that’ll change when the full month of data is reported next week. 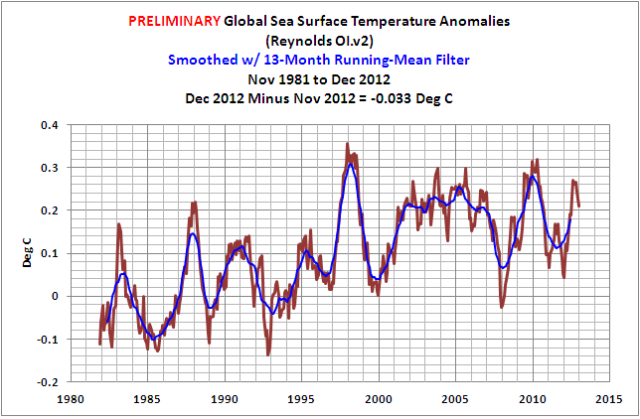 Weekly Global SST Anomalies are still rebounding after the month-long drop that ended a few weeks ago. They are presently at +0.232 deg C. Obviously, global sea surface temperature anomalies peaked August this year, but will there be a more substantial rebound as we enter 2013 or will they continue to decline in response to the ENSO-neutral conditions?

Who Turned on the Heat?was introduced in the blog post Everything You Ever Wanted to Know about El Niño and La Niña… …Well Just about Everything. The Updated Free Preview includes the Table of Contents; the Introduction; the beginning of Section 1, with the cartoon-like illustrations; the discussion About the Cover; and the Closing. The book was updated recently to correct a few typos.

For those who’d like a more detailed preview of Who Turned on the Heat?, see Parts 1 and 2 of the video series The Natural Warming of the Global Oceans. Part 1, below, appeared in the November, 2012 24-hour WattsUpWithThat TV (WUWT-TV) special.

Refer also to my introduction to the WUWT-TV videos here. You may also be interested in the video Dear President Obama: A Video Memo about Climate Change.