The NASA GISS comparison graph of global surface temperature anomalies that included the Japan Meteorological Agency’s data raised a few eyebrows yesterday.  The JMA data appears to diverge from the GISS, NCDC and UKMO datasets around 2000, with the JMA data flattening as the others continue to climb higher.  It was discussed at Tom Nelson’s blog, at Bishop Hill, at WattsUpWithThat and at TallBloke’s TalkShop, with Tom Nelson first catching the curiosity, I believe. His headline reads, “Uh oh: Warmist Gavin Schmidt points us to a temperature graph that includes Japanese Meteorological Agency data, which shows a significant decline since the late 1990s”. Good catch, Tom.

The JMA global sea surface temperature data is sometimes referred to as COBE at their website and as KOBI at other times. It appears that KOBI is source data and COBE is the finished interpolated product. There’s an overview of the dataset at the JMA website here, and the referenced paper is here, with more information here.  The JMA COBE sea surface temperature dataset is infilled, using optimum interpolation.  That means that the HADSST3 dataset in the following graphs is the only dataset that has not been infilled; that is, the grids without data for a month have been left blank. 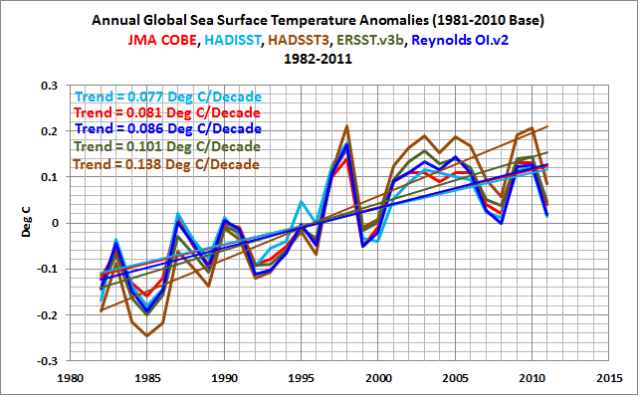 Let’s start with the satellite-era data on an annual basis. Figure 1 compares the JMA COBE global sea surface temperature anomalies to NOAA’s ERSST.v3b and Reynolds OI.v2 and to the Hadley Centre’s HADISST and HADSST3 datasets.  Looking at the linear trends, the trend of the JMA COBE data is between the trends of the satellite-based HADISST and Reynolds OI.v2 datasets. The HADSST3 data is the outlier.  I’ll examine the reason for that in a future post.  It may be a similar problem associated with the earlier HADSST2 data discussed here and here.

A comparison of the long-term datasets is shown in Figure 2.  The JMA uses base years of 1981-2010, which shifts most of the curve below zero. This doesn’t impact the trends.  It simply dictates where the curves intersect with zero anomaly. The long-term linear trend of the JMA COBE data is between the HADISST trend and the trends of the other two datasets.   We can also see that KOBE data has not been corrected for 1940s discontinuity discussed in the paper Thompson et al (2008) paper A large discontinuity in the mid-twentieth century in observed global-mean surface temperature.

I’ve recently published my e-book (pdf) about the phenomena called El Niño and La Niña. It’s titled Who Turned on the Heat? with the subtitle The Unsuspected Global Warming Culprit, El Niño Southern Oscillation. It is intended for persons (with or without technical backgrounds) interested in learning about El Niño and La Niña events and in understanding the natural causes of the warming of our global oceans for the past 31 years. Because land surface air temperatures simply mimic and exaggerate the natural warming of the global oceans over annual and multidecadal time periods, the vast majority of the warming taking place on land is natural as well. The book is the product of years of research of the ocean heat content data and satellite-era sea surface temperature data that’s available to the public via the internet. It presents how the data accounts for its warming—and there are no indications the warming was caused by manmade greenhouse gases. None at all.

Research interest: the long-term aftereffects of El Niño and La Nina events on global sea surface temperature and ocean heat content. Author of the ebook Who Turned on the Heat? and regular contributor at WattsUpWithThat.
View all posts by Bob Tisdale →
This entry was posted in SST Dataset Info. Bookmark the permalink.