With as little fanfare as possible, NOAA has corrected their erroneous claim in their 2012 State of the Climate Report that of 2012 as the warmest “La Niña year” on record. Refer to the January 21, 2013 blog post NOAA’s Definition and Data Contradict Their Claim That 2012 Was The Warmest La Niña Year, which was also cross posted at WattsUpWithThat here. 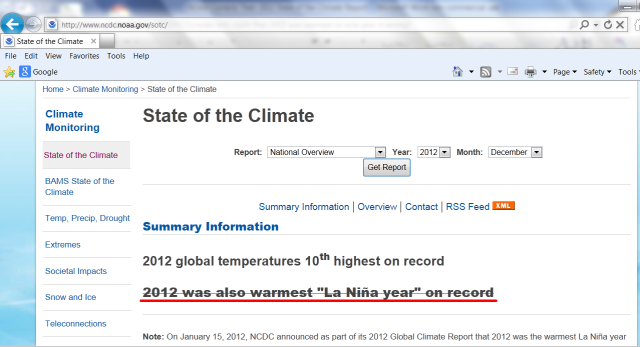 NOAA recently corrected their mistake by striking out the headline 2012 was also warmest “La Niña year” on record. See the highlighted screen cap above. They then added:

Note: On January 15, 2012, NCDC announced as part of its 2012 Global Climate Report that 2012 was the warmest La Niña year on record. While there are a variety of approaches for defining a La Niña or El Niño year, NCDC’s criteria is defined as when the first three months of a calendar year meet the La Niña or El Niño threshold as defined by NOAA Climate Prediction Center’s (CPC) Oceanic Niño Index (ONI). The list of historical La Niña years released on January 15 was based on an ONI dataset in force in early 2012 and used a 1971–2000 base period. During the course of the year, CPC introduced an ONI dataset using different base periods for determining anomalies for each year, with the most recent years (1995 to date) utilizing the 1981–2010 base period. Because of long-term warming trends in the equatorial Pacific Ocean, applying this more recent base period allows for better discernment of the temperature patterns needed to identify El Niño and La Niña years. In the most recent version of the dataset, using the newer base period methodology, 2006 and 2009 are now classified as La Niña years. The global average temperature in both 2006 and 2009 was 0.02°C (0.04°F) higher than 2012, making these two years the warmest La Niña years on record. NCDC has updated (via strikeout) our Annual Global Climate report to reflect the most current CPC ONI dataset.

With binary definitions of El Niño or La Niña, small changes in processing the data can affect the classification of weak El Niños or La Niñas. Despite these reclassifications, the general conclusions are similar from previous work: (1) global temperature anomalies for each phase (El Niño, La Niña, and neutral) have been increasing over time and (2) on average, global temperatures during El Niño years are higher than neutral years, which in turn, are higher than La Niña years.

NCDC continually examines its practices and definitions as science, datasets, and the understanding they bring improve. Thus, given the nature of our current method of classifying years as El Niño or La Niña, NCDC plans to re-examine and employ the best available definitions and datasets to robustly characterize the influence of El Niño and LaNiña on annual global temperatures.

As far as I can tell, all references to 2012 being the warmest La Niña year have been removed from the webpage.

At the end of my post linked above, which called the error to their attentions, I asked following Figure 3:

NOAA: If you make the correction to your State of the Climate report, please provide a link to this post. Thank you.

Well, it would have been nice.

I, of course, asked for the link because my earlier post also referred to my research, which has shown that NOAA’s ocean heat content data and their satellite-era sea surface temperature data do not support the hypothesis of manmade global warming. Refer to my recent essay titled “The Manmade Global Warming Challenge”, which is linked to my blog post here, and to my book which is discussed in the following.

I’ve recently published my e-book (pdf) about the phenomena called El Niño and La Niña. It’s titled Who Turned on the Heat? with the subtitle The Unsuspected Global Warming Culprit, El Niño Southern Oscillation. It is intended for persons (with or without technical backgrounds) interested in learning about El Niño and La Niña events and in understanding the natural causes of the warming of our global oceans for the past 31 years. Because land surface air temperatures simply exaggerate the natural warming of the global oceans over annual and multidecadal time periods, the vast majority of the warming taking place on land is natural as well. The book is the product of years of research of the satellite-era sea surface temperature data that’s available to the public via the internet. It presents how the data accounts for its warming—and there are no indications the warming was caused by manmade greenhouse gases. None at all.

Research interest: the long-term aftereffects of El Niño and La Nina events on global sea surface temperature and ocean heat content. Author of the ebook Who Turned on the Heat? and regular contributor at WattsUpWithThat.
View all posts by Bob Tisdale →
This entry was posted in Climate Assessment Report Faults. Bookmark the permalink.