The recent paper Compo et al (2013) is titled “Independent confirmation of global land warming without the use of station temperatures”. It’s in the preprint phase, and of course it’s paywalled. The abstract is here. It reads:

Confidence in estimates of anthropogenic climate change is limited by known issues with air temperature observations from land stations. Station siting, instrument changes, changing observing practices, urban effects, land cover, land use variations, and statistical processing have all been hypothesized as affecting the trends presented by the Intergovernmental Panel on Climate Change and others. Any artifacts in the observed decadal and centennial variations associated with these issues could have important consequences for scientific understanding and climate policy. We use a completely different approach to investigate global land warming over the 20th century. We have ignored all air temperature observations and instead inferred them from observations of barometric pressure, sea surface temperature, and sea-ice concentration using a physically-based data assimilation system called the 20th Century Reanalysis. This independent dataset reproduces both annual variations and centennial trends in the temperature datasets, demonstrating the robustness of previous conclusions regarding global warming.

Of course, SkepticalScience has already written a post about the paper, in which Dana1981 throws in his two cents about the significance of Compo et al (2013). SkepticalScience was kind enough to post Figures 1 and 2 from Compo et al (2013). The Compo et al Figure 1 is included here as Figure 1. It illustrates the warming of land surface air temperatures from 1901 to 2010 for the latitudes of 60S-90N. The blue curve is the Compo et al reanalysis. The red curve is the new and improved CRUTEM4 data from the UK Met Office. And the black curve is the average of other land surface air temperature reconstructions, including NCDC, GISS, JMA, and UDEL. 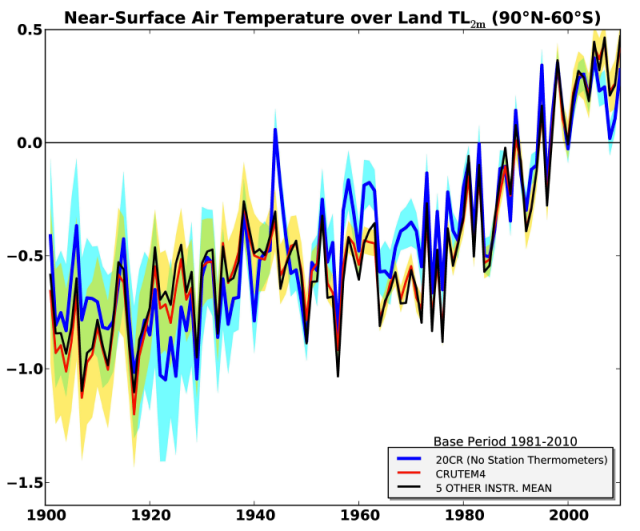 What stands out for you in that graph?

For me, compared to the other datasets, the Compo at al reanalysis has warmer anomalies during the early-to-mid 1970s and cooler anomalies during the late 2000s, which would create a lower trend during the recent warming period. The Compo et al reanalysis also shows a flattening of land air surface temperature anomalies starting in 1995, where the other datasets show a continued warming. Compo at el also show an exaggerated spike in 1943 associated with the multiyear El Niño then. And Compo et al show a later start to the rise during the early warming period.

The choice of 1981-2010 as the base years for anomalies is also a curiosity. While the WMO recommends updating base years periodically, global temperature anomaly data producers such as GISS, NCDC and UKMO use their individually selected base periods.

Using the coordinates function of MS Paint, I replicated the Compo at el (2013) reanalysis output. It’s compared to CRUTEM4 data for the latitudes of 60S-90N in Figure 2, using the base years of 1981-2010. (The CRUTEM4 data is available through the KNMI Climate Explorer on a gridded basis.) I’ve also included the linear trends. My replica produces a linear trend that’s comparable to the 0.09 deg C/decade trend noted in the SkepticalScience post. 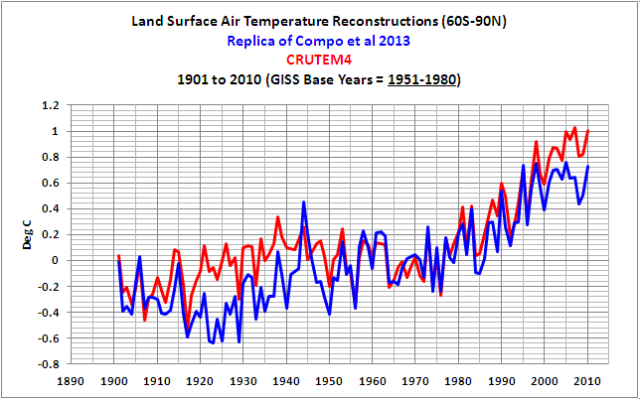 My Figure 6 is Figure 2 from Compo et al (2013). Note the differences in trends over Alaska and the mid-to-high latitudes of Russia for the period of 1952-2010 (Cells c and d). Compo et al (2013) could not reproduce the excessive rates of warming there during that period. 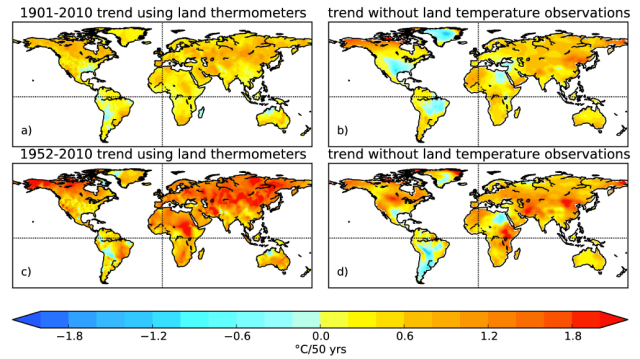 Research interest: the long-term aftereffects of El Niño and La Nina events on global sea surface temperature and ocean heat content. Author of the ebook Who Turned on the Heat? and regular contributor at WattsUpWithThat.
View all posts by Bob Tisdale →
This entry was posted in CAGW Proponent Arguments, LSAT. Bookmark the permalink.