The National Hurricane Center announced the formation of Tropical Storm Dorian. So we’ll take look at the sea surface temperatures and anomalies along its projected storm track. See Figure 1. In it, I’ve also highlighted the coordinates of the region we’re discussing in the anomaly graph in Figure 3. 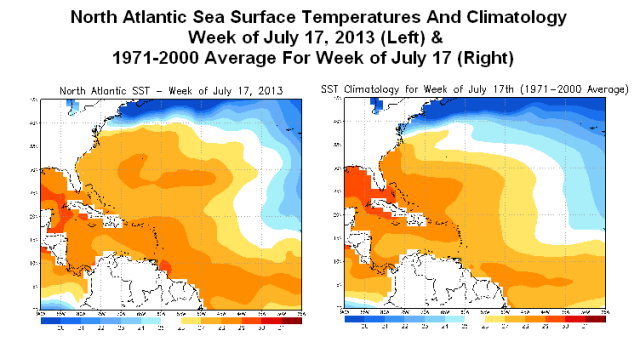 Sea surface temperatures are an important component of hurricane development.  Tropical storms need a lot of warm water to grow.  The following are two paragraphs from Chapter 4.18 [ENSO Influence on Tropical Cyclones (Hurricanes)] from my book Who Turned on the Heat?

The recipe for a tropical cyclone has three primary ingredients. The first is warm water—waters in excess of 26 deg C. Because the tropical storm feeds off the warm water, it cools the sea surface, so the warm water has to reach depths of about 60 meters in order to support the development of the tropical cyclone. The second ingredient is moisture and lots of it. The moisture has to cover a large area and be thick, normally extending from the sea surface to altitudes to 20,000 feet (about 465mb). The third ingredient is relatively light winds. That’s where an El Niño spoils the recipe.

An El Niño event in the tropical Pacific causes stronger-than-normal high level westerly winds in the Main Development Region of the tropical North Atlantic, and those strong high level winds can cause wind shear.

And as we can see in Figure 3, the weekly sea surface temperature anomalies for the week centered on July 17th were above the average for the period of 1971-2000, but they were not exceptionally warm. That is, they’ve been a whole lot warmer in the past. 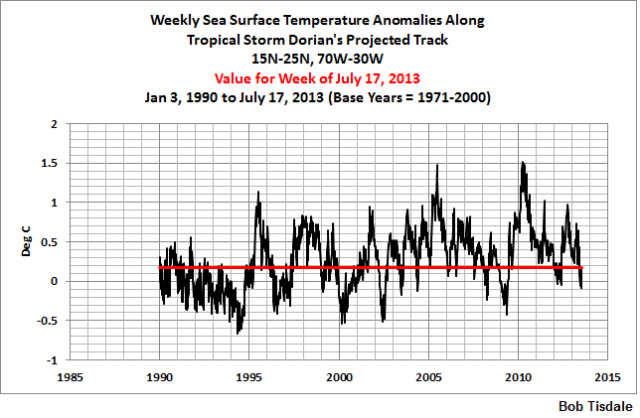 We’ll just have to see where Dorian decides to go and how strong it becomes. At present, the NHC is showing it remaining as a tropical storm through Tuesday as it nears the Dominican Republic.

The data and sea surface temperature maps presented in this post are available from the NOAA NOMADS website: