According to the NOAA National Hurricane Center, there are two low pressure systems in the tropical North Atlantic with good chances of becoming tropical storms. See Figure 1. In fact, in the eastern part of the main development region, Tropical Depression 5 has formed.

UPDATE: In the time it took me to write this post, the NHC upgraded TD5 to Tropical Storm Erin. (Thanks, Ric Werme.)

This post illustrates that in early August 2013 there is nothing unusual about the sea surface temperatures we’re presently experiencing in the hurricane development regions. And, of course, since there are many other factors that impact tropical storms, this post allows you to comment on them in general and provide links to the monitoring and discussion websites you find noteworthy.

Seasonal sea surface temperatures have been above the 26 deg C threshold of hurricane development for a couple of months, so there’s no reason to present absolutes, other than the map in Figure 2. 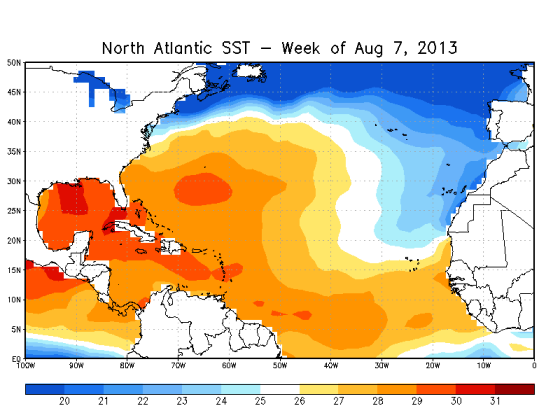 If you’re looking for longer-term illustrations of sea surface temperature anomalies for the following regions, see the May 19, 2013 post here.

One of the low pressure systems formed in the Caribbean. Sea surface temperatures there, Figure 3, are elevated (above the 1971-2000 reference), but they are not unusually warm.

The same could be said for the sea surface temperature anomalies of the Main Development Region, Figure 4, where Erin formed.

As discussed last November, the sea surface temperatures for the extratropical portion of Sandy’s storm track have cooled over the past 70+ years. See the posts here and here. And we also discussed Sandy in the post here. We showed that lower troposphere temperature anomalies, specific humidity and precipitable water also haven’t increased along Sandy’s path for decades.

El Niño events in the tropical Pacific suppress hurricane formation in the tropical North Atlantic. NOAA is forecasting ENSO-neutral conditions through the fall of 2013.

Sea surface temperature anomalies in the NINO3.4 region are a commonly used index for the timing, frequency and duration of El Niño and La Niña events. As illustrated in Figure 7, values there are slightly below zero. That is, we’re well within the +/- 0.5 deg threshold of El Niño/La Niña conditions.