Being an ENSO-neutral year, there’s nothing too exciting for this update — other than the unusual warming event in North Pacific. As shown, it has peaked and sea surface temperatures there are falling. We’ll just have to see where they bottom out during the seasonal cycle in the North Pacific anomaly data. An odd thought occurred to me about that warming, a strange coincidence with the warming event in the South Atlantic a couple of years ago. I’ll discuss it in a separate post.

Global sea surface temperature anomalies are at about +0.29 deg C for the week centered on September 18th, compared to the base years of 1971-2000. They were driven upwards this summer by the North Pacific. 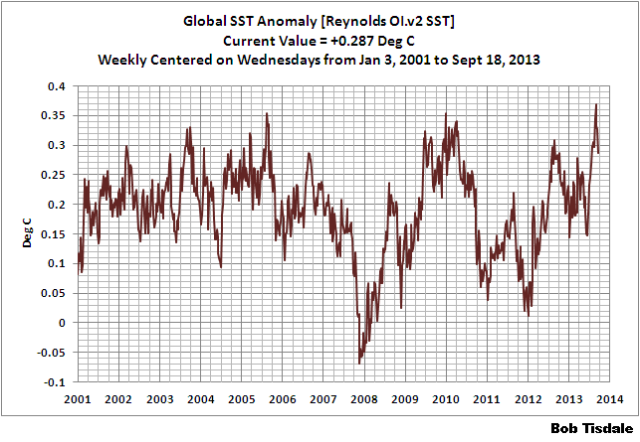 The sea surface temperature anomalies of the NINO3.4 region in the equatorial Pacific (5S-5N, 170W-120W) are a commonly used metric for the frequency, strength and duration of El Niño and La Niña events. For the week centered on Wednesday September 18, 2013, they were at about 0.0 deg C. That is, there aren’t El Niño or La Niña conditions, which have thresholds of +0.5 deg C and -0.5 deg C, respectively. 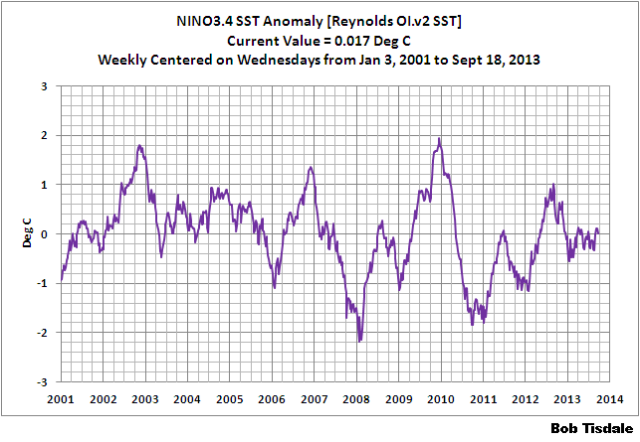 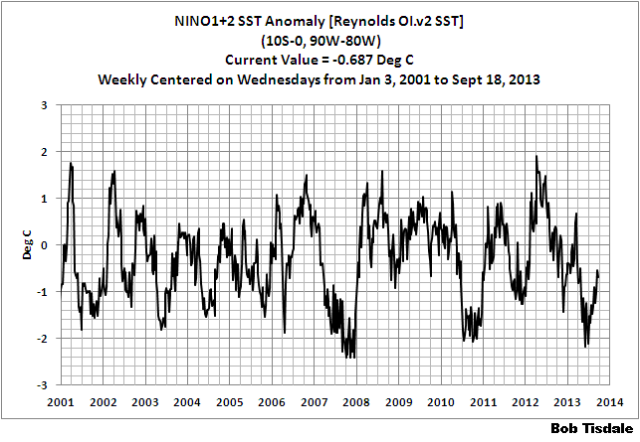 For a further discussion, see the essay (pdf) titled The Manmade Global Warming Challenge. (It’s 42MB, but it’s free and worth the download time.)

Who Turned on the Heat? was introduced in the blog post Everything You Ever Wanted to Know about El Niño and La Niña… …Well Just about Everything. The Updated Free Preview includes the Table of Contents; the Introduction; the beginning of Section 1, with the cartoon-like illustrations; the discussion About the Cover; and the Closing. The book was updated recently to correct a few typos.

Please buy a copy. (Credit/Debit Card through PayPal. You do NOT need to open a PayPal account.) Simply scroll down to the “Don’t Have a PayPal Account” purchase option. It’s only US$8.00.

For those who’d like a more detailed preview of Who Turned on the Heat?, see Parts 1 and 2 of the video series The Natural Warming of the Global Oceans.