Will their Failure to Properly Simulate Multidecadal Variations In Surface Temperatures Be the Downfall of the IPCC?

This post illustrates what many people envision after reading scientific papers about the predicted multidecadal persistence of the hiatus period—papers like Li et al. (2013) and Wyatt and Curry (2013).  See my blog post Another Peer-Reviewed Paper Predicting the Cessation of Global Warming Will Last At Least Another Decade.

I published a quick post introducing Li et al (2013), Another Peer-Reviewed Paper Predicting the Cessation of Global Warming Will Last At Least Another Decade.  The cross post at WattsUpWithThat is here.  My Figures 1 and 2 are Figures 3 and 4b from Li et al. (2013). Their Figure 3 shows a multidecadal component from Northern Hemisphere surface temperatures and a relatively low warming rate in a residual—a warming rate that excludes the higher rate imposed by the Atlantic Multidecadal Oscillation since the mid-1970s.  Their Figure 4b shows the Li et al. (2013) predicted cooling of Northern Hemisphere temperatures through 2027. 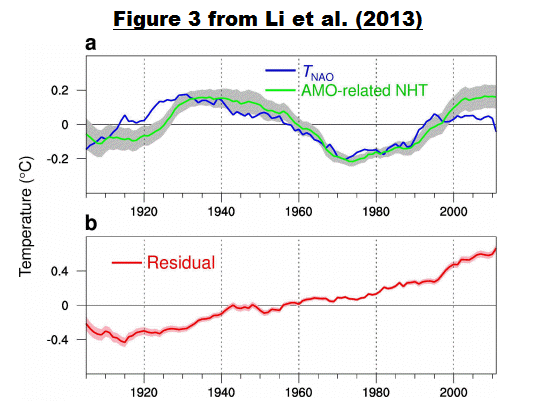 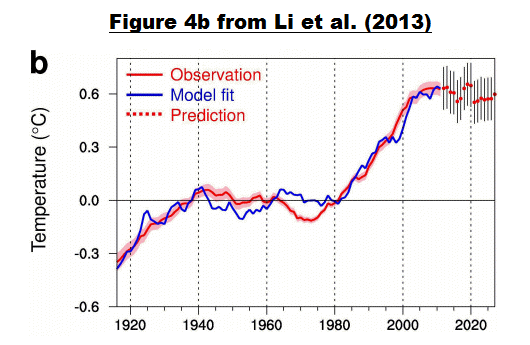 However, for the 15-year trend interval corresponding to the latest observation period 1998-2012, only 2% of the 62 CMIP5 and less than 1% of the 189 CMIP3 trend computations are as low as or lower than the observed trend.

Li et al. (2013) predicted Northern Hemisphere surface temperatures will cool slightly until 2027.  They used HADCRUT4 data.  I’ve used the same dataset in Figure 3, starting in January 1916 and running to the more current month of July 2013.  Figure 3 also shows the multi-model ensemble mean of the simulations of Northern Hemisphere surface temperatures from January 1916 through December 2027. The models are the CMIP5 generation, used by the IPCC for their 5th Assessment Report. (Both data and model outputs are available from the KNMI Climate Explorer.)  The data and model outputs have been smoothed with 121-month running-average filters.  For the data-based projection, I simply spliced the smoothed data starting in January 1945 to the end of the current smoothed data. 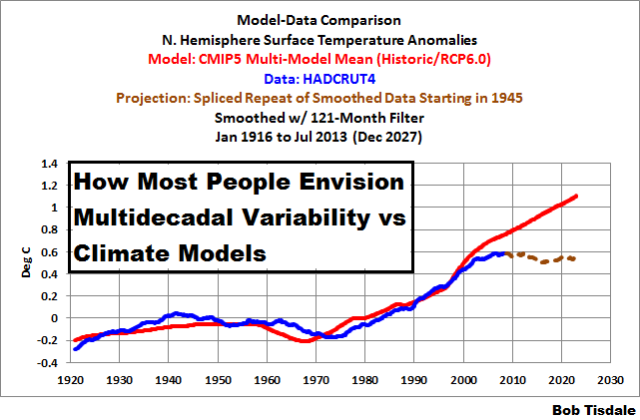 If Northern Hemisphere surface temperatures cool through 2027 (at the same rate they had starting in 1945), the divergence between models and data will continue to grow.  The reason:  the modelers simply extended forward in time the high warming rate from their simulations of the late warming period.  That clearly shows that the modelers did NOT consider the known multidecadal variations in surface temperatures in their projections.

Something else to consider:  Li et al (2013) did not state the cessation of warming would end in 2027.  Their model is only valid for 16 years into the future. After the North Atlantic Oscillation (NAO) switches again at some time in the future, using the Li et al (2013) model, they would then be able to predict an end to the multidecadal Northern Hemisphere cooling—and it would occur16 years after that NAO switch.

WILL THE IPCC’S FAILURE TO ADDRESS MULTIDECADAL VARIABILITY WILL BE THEIR DOWNFALL?

Let’s take this another step:  Most people will also envision the multidecadal variations extending further into the future.   That is, they will imagine a projection of future Northern Hemisphere surface temperatures repeating the slight cooling from 1945 to the mid-1970s along with the later warming, followed by yet another slight cooling of Northern Hemisphere surface temperatures, in a repeat of the past “cycle”.  That is, they will envision the surface temperature record repeating itself. And in their minds’ eyes, they see an ever growing divergence between the models and their projections, like the one shown in Figure 4.

It’s very obvious that climate modelers, under the direction of the IPCC, simply tuned their models to the high rate of warming from one half of a multidecadal “cycle” without considering the other counterbalancing or offsetting portion of the “cycle”.  The IPCC’s position has been and continues to be that the warming from the mid-1970s to the turn of the century was caused primarily by manmade greenhouse gases—a position that has always been unsupportable because climate models do not properly simulate multidecadal variability.  The evidence of the model failings become more pronounced with every passing month of the halt in global warming.

Research interest: the long-term aftereffects of El Niño and La Nina events on global sea surface temperature and ocean heat content. Author of the ebook Who Turned on the Heat? and regular contributor at WattsUpWithThat.
View all posts by Bob Tisdale →
This entry was posted in Atlantic Multidecadal Oscillation, CAGW Proponent Arguments, Climate Model Problems, The Halt In Global Warming. Bookmark the permalink.

17 Responses to Will their Failure to Properly Simulate Multidecadal Variations In Surface Temperatures Be the Downfall of the IPCC?