Global warming enthusiasts have always relied on untruths when they discuss my presentations of data, especially my presentations about the long-term effects of El Niño and La Niña events.   In this post, I’ll address two more of those falsehoods about my data presentations.

Back in January I prepared a post about two of those untruths (See Untruths, Falsehoods, Fabrications, Misrepresentations):

My very popular recent post Dana Nuccitelli Can’t Come to Terms with the Death of the AGW Hypothesis (and the cross post at WattsUpWithThat) was not well received by global warming enthusiasts, as you might imagine.

My post was a response to Dana Nuccitelli’s blog post at The Guardian Does the global warming “pause” mean what you think it means?, which was cross posted at SkepticalScience.  The second comment on the SkepticalScience thread referred to my cross post at WattsUpWithThat.  That, of course, in turn, resulted in a string of untruths, falsehoods, fabrications and misrepresentations.   Let’s discuss two of them:

I DIVIDE THE OCEANS INTO LOGICAL SUBSETS

Depending on the topic of discussion, I present ocean heat content data and sea surface temperature data in logical subsets.  This somehow gets mutated into cherry-picking by global warming enthusiasts.

There is nothing small about any of the sea surface temperature and ocean heat content subsets that I typically present.  Global warming enthusiasts appear to forget that the oceans cover about 70% of the surface of the globe, so they obviously need a quick geography lesson:

The tropical Pacific (24S-24N, 120E-80W) is not a small portion of the global oceans. As shown in Figure 1, it stretches almost halfway around the globe. It covers a surface area of about 88 million km^2, or about 17% of the surface of the Earth, or about 24% of the surface of the global oceans.  Referring to the Wikipedia Continent webpage, the tropical Pacific covers more surface area of the Earth than Asia, Africa and Europe combined (84 million km^2).

There is so little source data for extratropical South Pacific that the long-term data there before the ARGO era serves little value.  (See the animations here, here, and here for the locations of subsurface temperature measurements at depths of 250 meters, 500 meters and 1500 meters.)  So the only other area of the Pacific worth plotting ocean heat content for is the extratropical North Pacific, which is shown in Figure 2 along with the tropical Pacific. 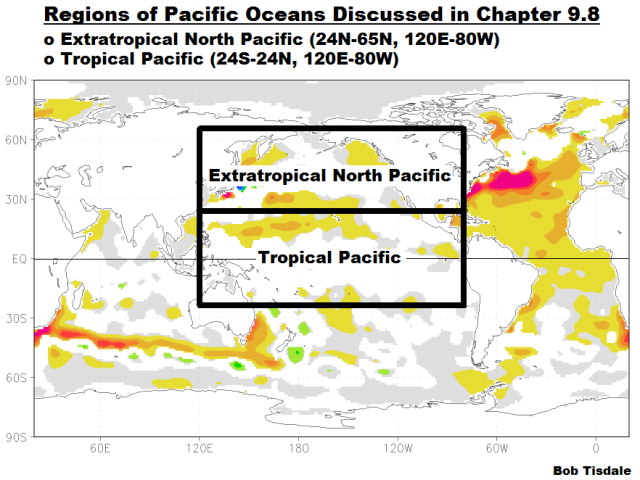 The extratropical North Pacific (24N-65N, 120E-80W) is by far the smallest of the regions I generally present.  Even so, it covers a surface area of about 37 million km^2, or about 7% of the surface of the globe, or about 10% of the surface of the global oceans.  Referring again to the Wikipedia Continent webpage, that means Asia is the only continent larger than the extratropical North Pacific. 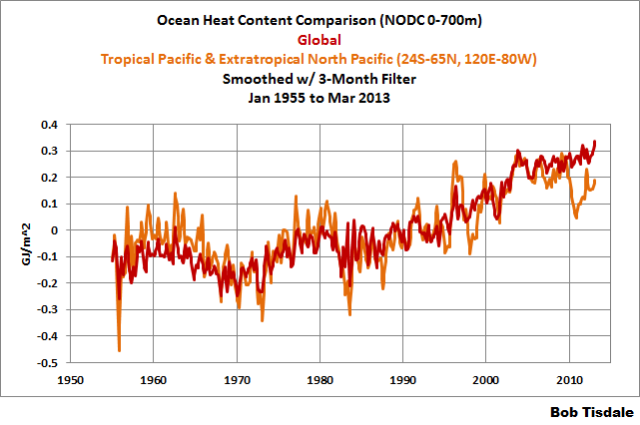 NOTE:  If the subject of the natural warming of the global oceans is new to you, refer to the illustrated essay “The Manmade Global Warming Challenge” (42MB) for an introductory discussion.

Figure 5 presents a map of the regions I typically use to illustrate that the warming of the sea surface temperatures of the oceans occurred via natural processes, not from increased emissions of carbon dioxide. The map is an annotated version of one that presents the warming and cooling rates of sea surface temperatures during the satellite era, from 1982 to 2012.  See the version without notes here.

There’s nothing small about the North Atlantic.

There’s nothing small about the East Pacific either. 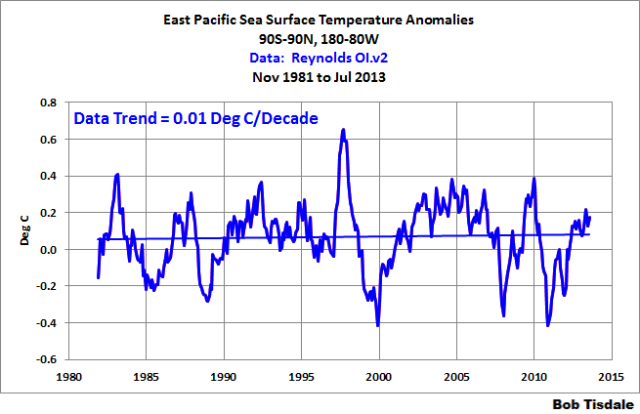 That is, without the upward shifts caused by the El Niño events of 1986/87/88 and 1997/98 (and possibly the El Niño of 2009/10) the sea surface temperatures of the South Atlantic, Indian and West Pacific Oceans would show no warming.  Once again, if the subject of the natural warming of the global oceans is new to you, refer to the illustrated essay “The Manmade Global Warming Challenge” (42MB) for an introductory discussion.

In the post Dana Nuccitelli Can’t Come to Terms with the Death of the AGW Hypothesis, I presented the NODC’s ocean heat content data for the depths of 0-700 meters and 0-2000 meters in the North Atlantic and North Pacific. There I wrote [Figure numbers revised for this post, and a hyperlink to the IPCC illustration Box 3.1, Figure 1 has been added.]:

Further to the IPCC’s Box 3.1, Figure 1, Dana Nuccitelli forgot to advise his readers that the data in the IPCC’s graph have been smoothed with a 5-year filter, and that the smoothing would hide the slowdown in warming of the oceans at depths of 0 to 700 meters and 700 to 2000 meters.  And he has elected not to tell his readers that the quarterly NODC ocean heat content data for the North Atlantic during the ARGO era continues to show very little warming for depths of 0-2000 meters and cooling at depths of 0-700 meters. (See Figure [8].)

He’s overlooked the fact that the ocean heat content data for the North Pacific show cooling at both levels, with the 0-2000 meter data cooling at a lesser rate than the 0-700 meter data. (See Figure [9].) 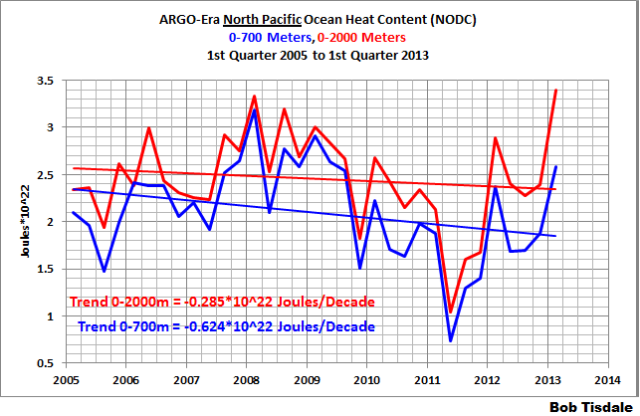 (Figures [8] and [9] are from the post here. And the data are available here from the NODC website.)

CO2 is supposed to be a well-mixed greenhouse gas. Obviously, increased CO2 emissions in recent years have had no impact on the ocean heat in the Northern Hemisphere.

As shown above, I clearly noted that Nuccitelli forgot to tell his readers about how the Northern Hemisphere oceans have stopped warming during the ARGO era, yet for doing so I’m nonsensically accused of cherry-picking small regions of the global oceans.

We’ve already discussed the size of the North Atlantic.

The Pacific Ocean is the largest body of water on the planet.  The Pacific covers 165 million km^2, or about 33% of Earth’s surface, or about 46% of the global ocean surface, or more than the surface area of all of the continental land masses combined. (See the Wikipedia Pacific Ocean webpage.) If we assume the North Pacific represents half of the Pacific, the North Pacific’s surface area of 82.5 million km^2 is comparable to the continental land masses of Africa, Asia and Australia combined (83 million km^2).

Why do you only present ocean data from the Northern hemisphere/

I assume you’re referring to Figures [8] and [9], Joe. First a note: The start year of that graph is dictated by the NODC. They only present the annual [and quarterly] ocean heat content data from the depths of 0-2000 meters starting in 2005, which is when the ARGO floats had complete coverage of the global oceans. See the NODC data webpage here:
http://data.nodc.noaa.gov/woa/DATA_ANALYSIS/3M_HEAT_CONTENT/DATA/basin/yearly/h22-w0-2000m.dat

That’s been one of my primary messages at my blog and here at WUWT. Global data is a lousy metric to use to portray global warming, because when the data is broken down into logical subsets, it reveals things that aren’t apparent in the global data.

Someone is bound to ask me on this thread why I didn’t present the long-term ocean heat content data for 0-2000 meters?

Because, (1) as I explained in great detail in the post Is Ocean Heat Content Data All It’s Stacked Up To Be? the long-term ocean heat content dataset for 0-2000 meters is a contrived dataset, at best;  (2) NODC’s Pentadal Ocean Heat Content (0 to 2000m) Creates Warming That Doesn’t Exist in the Annual Data – A Lot of Warming, so there’s no reason to present a dataset that mysteriously, without explanation, exaggerates the warming found in the annual data; and (3) the 5-year smoothing, as I mentioned above, hides the recent slowdown in the warming of the global ocean heat content caused by the halt in warming in the Northern Hemisphere.

Instead of accepting that the hypothesis of human-induced global warming is fatally flawed, global warming enthusiasts manufacture fairytales of my cherry-picking small portions of the oceans.

I DO NOT REJECT THE GREENHOUSE EFFECT

Typically, in a blog post or in comments, I will write something to the effect of:

Somehow that gets turned around into the falsehood that I reject the greenhouse effect.

I understand the greenhouse effect, and I understand that it has been and continues to be responsible for maintaining the surface of the Earth at a warmer temperature than would exist without it.

The statement that I reject the greenhouse effect is an untruth, and it foolishly follows a blog post in which I illustrated the estimated radiative imbalance at the surface of the Earth. See Figure 10. (That illustration was presented as Figure 5 in my post Dana Nuccitelli Can’t Come to Terms with the Death of the AGW Hypothesis.)

My Figure 10 is an annotated version of Figure 1 from Stephens et al (2013) “An Update on Earth’s Energy Balance in Light of the Latest Global Observations”.

I also understand that the emissions of manmade greenhouse gases are supposed to have created a radiative imbalance at the Earth’s surface of 0.6 watts/meter^2, but that the uncertainties are +/- 17 watts/meter^2.  And of course that means the uncertainties are many times greater than the approximated imbalance.  I also understand that the estimated surface imbalance of 0.6 watts/meter^2 is only 0.11% (that’s eleven one-hundredths of one percent) of the 534 watts/meter^2 total of the estimated downward shortwave radiation (sunlight) and downwelling longwave (infrared) radiation at the surface.

My argument has always been that I can find no evidence of a contribution from manmade greenhouse gases to the warming of ocean heat content data (depths of 700 meters) since 1955, and that there is no evidence that anthropogenic greenhouse gases contributed to the warming of sea surface temperatures of the global oceans during the satellite era. For an overview of my findings, see my illustrated essay “The Manmade Global Warming Challenge” [42mb].   The claim that I reject the greenhouse effect clearly misrepresents my position.

Proponents of anthropogenic global warming, after reading the book from cover to cover, might conclude that I did not disprove the hypothesis of manmade carbon dioxide-driven global warming, and they’re correct.  I even admitted that within these pages.  It’s likely anthropogenic greenhouse gases have had an impact on the additional warming of land surface air temperatures that’s above and beyond the warming attributable to the natural warming of the global oceans. That additional land surface air temperature warming, however, has also been caused by land-use change, the urban heat island effect, poor surface station siting, overly aggressive corrections to the land surface temperature records, black carbon, aerosols, etc.

However, this book clearly illustrated and described the following:

Global warming enthusiasts are having trouble accepting that their beloved hypothesis of human-induced global warming is fatally flawed.   As the hypothesis crumbles around their feet, they are left with nothing but untruths, falsehoods, fabrications, and misrepresentations about my work and the work of other skeptics.

Research interest: the long-term aftereffects of El Niño and La Nina events on global sea surface temperature and ocean heat content. Author of the ebook Who Turned on the Heat? and regular contributor at WattsUpWithThat.
View all posts by Bob Tisdale →
This entry was posted in CAGW Proponent Arguments. Bookmark the permalink.