Tropical Storm Arthur – There Is Nothing Unusual About the Sea Surface Temperatures Off the East Coast of the U.S.

This post was prepared in anticipation of the usual nonsense we hear whenever a tropical storm or hurricane forms and is expected to strike the U.S.  The map to the right (Map 1) presents the weekly sea surface temperatures (not anomalies) for the Eastern U.S. Coastal Waters from Florida to Massachusetts (26N-42N, 82W-70W), for the week centered on Wednesday June 25,2014. (Please click the map to enlarge it.)  Seasonally warmed sea surface temperatures from the east coast of Florida northwards to North Carolina are well above the 26 deg C (79 deg F) value needed to generate and maintain tropical storms and hurricanes.

Before we look at the recent sea surface temperature anomalies, let examine longer-term data to put it in context.

Initial note:  The anomalies presented in this post are referenced to the base-year period of 1971-2000, which are the base years used by NOAA for their Reynolds OI.v2 sea surface temperature data through the NOMADS website.

When Hurricane Sandy strolled up the eastern extratropical waters off the east coast of the U.S. back in 2012, we presented sea surface temperature data for its storm track in two posts:

So there should be no surprise that the sea surface temperature anomalies (NOAA’s ERSST.v3b data) for similar coordinates also show cooling since 1938, the year of the Great New England Hurricane—also known as the Yankee Clipper, Long Island Express, or the Great Hurricane. See Figure 1.  The coordinates used for this post are 26N-42N, 82W-70W, and they are shown above in Map 1. The ERSST.v3b data are available through the KNMI Climate Explorer. 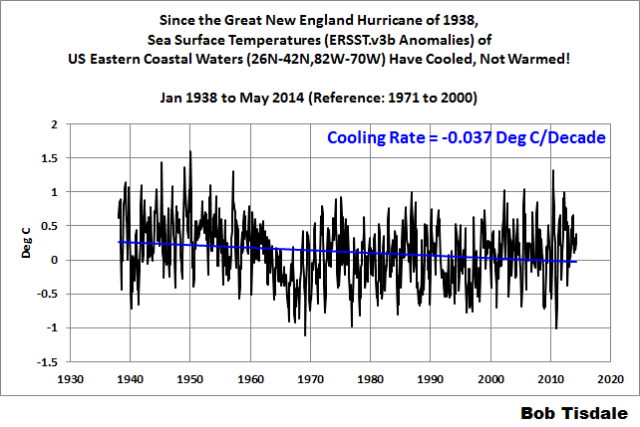 In anticipation of someone accusing me of cherry-picking the start date, Figure 2 presents the sea surface temperature anomalies and linear trend, for that coastal region, for the past 100 years.  Sea surfaces warmed there primarily in the first half of the 20th Century, not the second. The linear trend is basically flat, which means, based on the trend, sea surface temperatures along the east coast of the U.S. have not warmed since 1915. 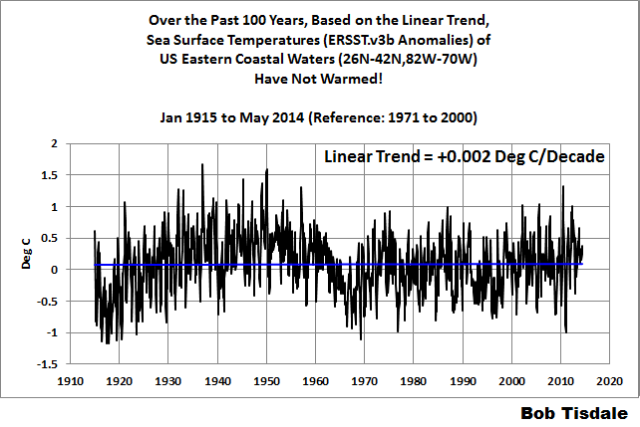 Let’s switch datasets to NOAA’s Optimum Interpolation (version 2) satellite-enhanced sea surface temperature data, aka Reynolds OI.v2.  It is available through NOAA’s NOMADS website in monthly and weekly formats. That monthly data start in November 1981, and, as of today, they run through the preliminary monthly data for June 2014.  (The final June 2014 values will be available on Monday, July 7th.)  Figure 3 presents the monthly sea surface temperature anomalies for the eastern coastal waters from Florida to Massachusetts, using the same coordinates as above: 26N-42N, 82W-70W.  The red horizontal line is not the linear trend; it is the June 2014 value.  It was +0.21 deg C.  I suspect that value will increase in the final version, but there’s nothing unusual about that value. 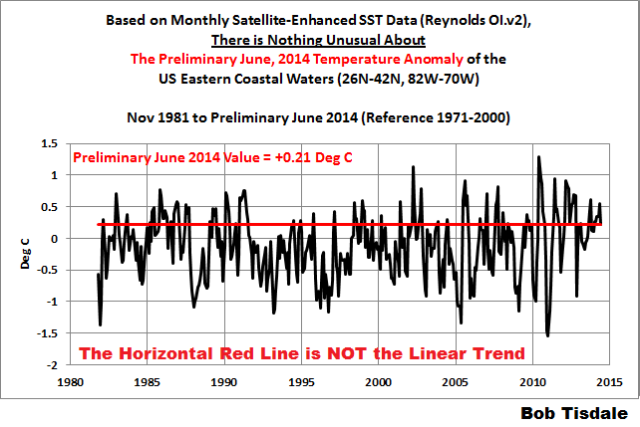 Looking at the data on a weekly basis for such a small region leaves us with lots of weather-related noise. As we can see in Figure 4, the sea surface temperatures for that region have increased, cycling higher in the past few weeks, up to almost +1.0 deg C.  But even that anomaly has been exceeded in the past. 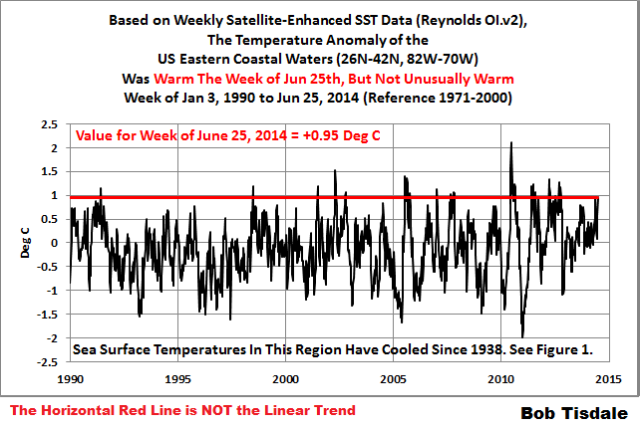 And referring to the monthly data back to 1915 (Figure 2) anomalies that high were more commonplace in the first half of the 20th Century than in recent decades.

While we’re discussing sea surface temperature anomalies and hurricanes, for information purposes, the next two graphs present the weekly sea surface temperature anomalies through June 25, 2014 for the Atlantic Main Development Region (10N-20N, 80W-20W), Figure 5, and for the Gulf of Mexico (21N-31, 98W-81W), Figure 6.  Again, the horizontal lines in these graphs are the values for the week of June 25th, not the linear trends. 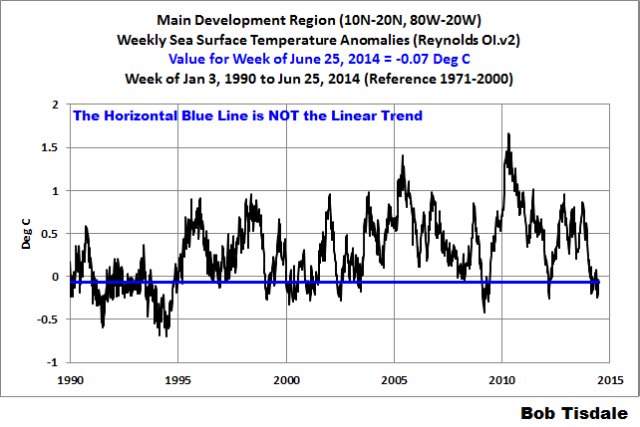 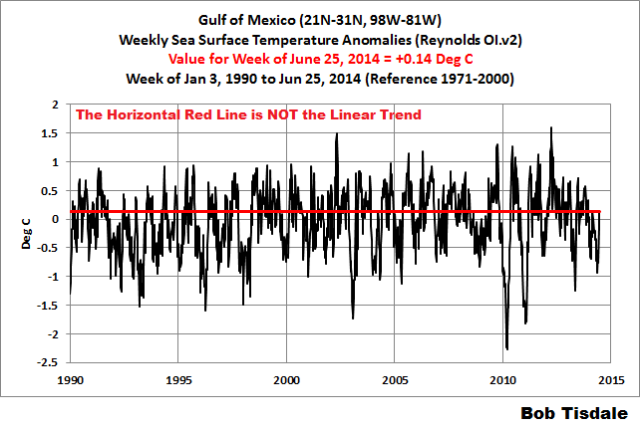 Note: Hurricanes DO NOT CARE about temperature anomalies.  The actual sea surface temperatures (absolute) from June to November have and will continue to rise to values capable of spawning hurricanes…a result of the normal seasonal variations in surface temperatures.  And while El Niño conditions in the Pacific tend to suppress hurricane development by effectively chopping the tops off the developing hurricanes (the result of wind shear in the tropical North Atlantic caused by an El Niño in the tropical Pacific), hurricanes can still form and will likely continue to do so this season.

That map is based on the NOAA NESDIS Coral Reef Watch analysis, which excludes daytime satellite observations. See their discussion of sea surface temperature data here.  As a result, their maps have a warm bias, which they believe is important for their Coral Reef Watch program.  But it also explains the apparent difference between that map and the satellite-based data presented in this post, which include bias-adjusted daytime values.

As blogger “Steve from Seattle” pointed out in his comment on the cross-post at WUWT, the NESDIS data should not have a warm bias.  My mistake.  It’s the color-scaling of their maps that give them the warm appearance.  The NESDIS does not have a range of grey or white near zero (+/- 0.5 deg C for example), as is common with many other maps.  (See example here.)  The NESDIS starts with the yellows anywhere above a zero anomaly.

4 Responses to Tropical Storm Arthur – There Is Nothing Unusual About the Sea Surface Temperatures Off the East Coast of the U.S.