The peak of the Atlantic Hurricane season is rapidly approaching.  See the NOAA Hurricane Climatology  graph to the right.  (Give it a click for a full-sized version.) Hurricane frequency tends to peak in mid-September.

First, before we look at the anomaly data, I don’t believe I’ve ever presented how the sea surface temperatures for those regions normally vary throughout a year.

For the week centered on Wednesday, August 13, 2014, the surface temperature anomalies for the Caribbean (Figure 3) are slightly above the 1971-2000 “normals”.

Gulf of Mexico waters, on the other hand, are presently towards the high end of their recent range of variability.  See Figure 4.  In addition to variations caused by weather, the weekly sea surface temperature anomalies there appear to also have a strong seasonal component. 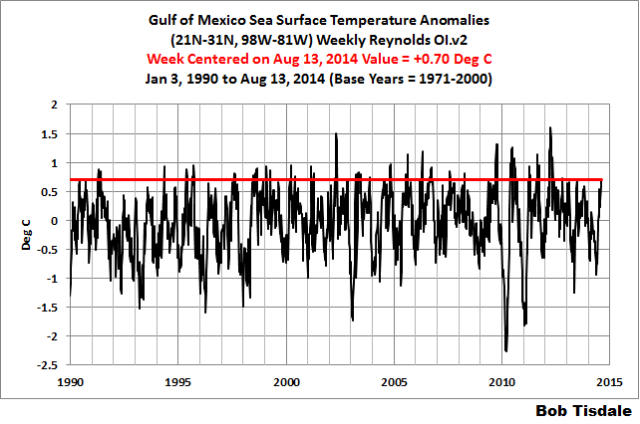 And as shown in Figure 5, the most recent weekly sea surface temperatures of the extratropical waters off the east coast of the U.S. are also above the 1971-2000 “normals”, but not exceptionally warm.  Then again, as we discussed after Sandy strolled up those waters back in 2012, the sea surface temperatures in that region have cooled (not warmed) since the great New England hurricane of the 1930s. See the posts here and here.

Last but not least, Figure 6, the sea surface temperature anomalies for the Main Development Region are below (not above) the normals for 1971-2000.

Current sea surface temperatures (absolute) are capable of spawning hurricanes…a result of the normal seasonal change in surface temperatures. See the map in Figure 7. And while the recent El Niño conditions in the Pacific tend to suppress hurricane development by effectively chopping the tops off the developing hurricanes (the result of wind shear in the tropical North Atlantic caused by the El Niño), hurricanes can still form and will likely continue do so this season.

The NOAA Reynolds OI.v2 sea surface temperature data and maps are available in absolute and anomaly forms through the NOAA NOMADS website