So let’s take a look at the sea surface temperature data for the Gulf of Maine, and see what story they have to tell.

For those readers who are wondering where in the world the Gulf of Maine is, I’ve highlighted its location on a trend map of ocean surface temperatures for the period of 2004 to 2013. See Figure 1.  For the past 10 years, yes, the surface of the Gulf of Maine warmed at a high rate…along with the Kuroshio-Oyashio extension east of Japan and the coastal waters of western Australia.  Other than those regions and a few others, global sea surface temperatures have cooled (not warmed) over the past decade.  Note the negative number also highlighted on the trend map.

We’re using the coordinates of 41N-45N, 71W-66W for the Gulf of Maine sea surface temperature data in this post.  That’s less than one 5-degree latitude by 5-degree longitude grid.  So consider the size of the region.

The NOAA annual ERSST.v3b-based sea surface temperatures for the Gulf of Maine (1854-2013) are shown in Figure 2.  Sea surfaces there were relatively cool from the 1870s until the 1920s, when there was an upward shift in the late 1920s.  Sea surfaces were quite warm in the Gulf of Maine from the early-1940s to the mid-1950s.  There was a dip and rebound in the 1960s.  There appears to have been another upward shift in the late 1990s, followed a few decades later by a spike in surface temperatures in 2012.

I’ve highlighted the period of 2004 to 2013 in Figure 3 to give you an idea of the period they’re concerned about.

NO LONG-TERM WARMING SINCE 1930 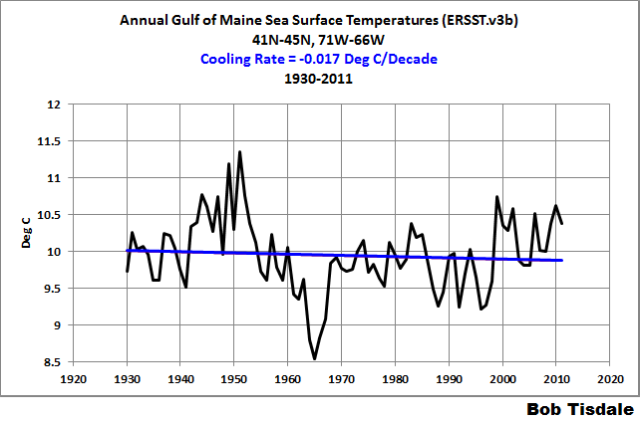 The articles focused on the last decade, so maybe there something unusual about the recent decadal temperature or decadal warming rate for the Gulf of Maine.  Nope.

Somehow, I don’t think any of this would come as a surprise to the fishermen and lobstermen of the Gulf of Maine.  They understand the effects on their businesses of natural variations in ocean temperatures.

It’s really tough to claim that human-induced global warming has caused a warming of the Gulf of Maine, when, if you lop off the last two years of data, the surfaces there have cooled for more than 80 years.  Refer back to Figure 5.

Just another example of unfounded alarmism.

The data presented are available through the KNMI Climate Explorer.

Thanks to blogger Alec, aka Daffy Duck for advising me of this nonsense.

Research interest: the long-term aftereffects of El Niño and La Nina events on global sea surface temperature and ocean heat content. Author of the ebook Who Turned on the Heat? and regular contributor at WattsUpWithThat.
View all posts by Bob Tisdale →
This entry was posted in Alarmism, SST Update. Bookmark the permalink.

12 Responses to Baseless Alarmism: Global Warming’s Impact on Gulf of Maine Driving Away Lobsters and Fish