The KNMI Climate Explorer has added a number of datasets to their Monthly observations webpage, where users select desired data based on global coordinates. (Many thanks to Dr. Geert Jan van Oldenborgh of KNMI.)  The new datasets include, under the heading of Ocean mean temperature, the National Oceanographic Data Center (NODC) Vertically Averaged Temperature Anomaly data of the global oceans.  The data are supported by the Levitus et al. (2012) paper World Ocean Heat Content and Thermosteric Sea Level change (0-2000 m),1955-2010.  Basically, the NODC Vertically Averaged Temperature data are the temperature component of their Ocean Heat Content data.  KNMI has added the vertically averaged temperature anomaly data for the depth ranges of 0-100 meters (1955 to present), 0-700 meters (1955 to present) and 0-2000 meters (2005 to present).

Note: KNMI has also added to their Climate Explorer the Japanese Meteorological Agency (JMA) Ocean Heat Content data for the depths of 0-700 meters.  We’ll compare them to the NODC’s data in a future post.

In this post we’ll take a quick look at the vertically averaged temperature anomaly data for 0-2000 meters.  That’s the period when subsurface temperature measurements are dominated by ARGO floats, providing a reasonably complete view of ocean temperatures to depths of 0-2000 meters.  We’ll examine the other depth ranges in future posts.

The NODC present their data on a quarterly basis. KNMI has converted it to monthly data by assigning the quarterly values to each of the respective months. As a result, the monthly data take on a step-like appearance, with lots of little plateaus.  We could smooth the data with 3-month filters to eliminate those tiny steps, but in this post it would serve little value because we’re looking primarily at warming (and cooling) rates.

Figure 1 presents the NODC vertically averaged temperatures anomalies, for the depths of 0-2000 meters, for the 1st quarter of 2005 through the 2nd quarter of 2014.  Since the 1st quarter of 2005, the oceans of the Southern Hemisphere for the depths of 0-2000 meters have warmed at a rate of about +0.05 deg C/decade, based on the linear trend.  On the other hand, the linear trend for the Northern Hemisphere oceans is considerably less, warming at a rate that’s about 10% of the Southern Hemisphere rate.  That’s quite a difference in a world where manmade greenhouse gases are supposedly responsible for the warming and where manmade greenhouse gases are said to be well mixed. 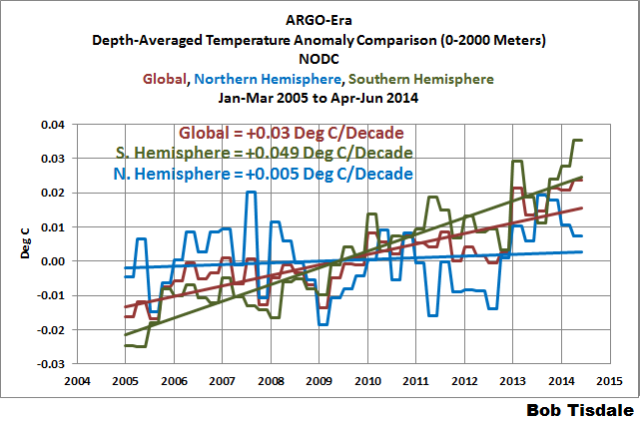 I’ve divided the ocean basins into subsets using the same coordinates I use for the sea surface temperature updates:

The cooling rate of the Arctic Ocean is so out of proportion to the other ocean basins that I’ve shown it separately in Figure 2.  One would want to attribute the spike in 2007 to the seasonal sea ice loss that year.  Curiously, similar spikes do not appear during 2012 and 2013 when there were comparable or greater seasonal losses. 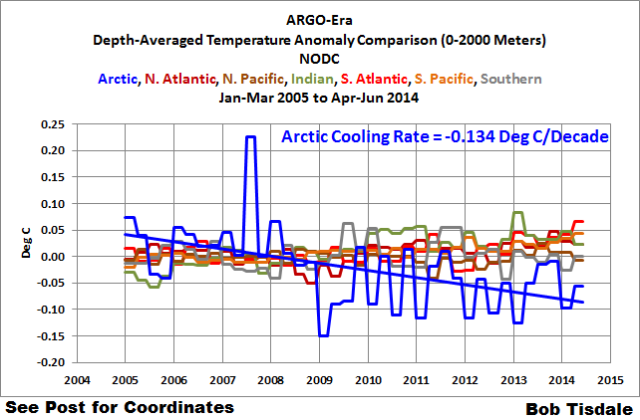 I’ve excluded the Arctic Ocean from Figure 3. As shown, there is a wide range of warming rates for the rest of the ocean basins to depths of 2000 meters. The Indian Ocean has had the greatest warming during the ARGO era, more than twice the warming rates of the South Atlantic and South Pacific, and about 3 times higher than the rate of the North Atlantic.   Yet, for the depths of 0-2000 meters, the North Pacific and the Southern Ocean surrounding Antarctica show basically no warming over the past decade.

WHICH LATITUDES WARMED AND WHICH ONES COOLED

Figure 4 presents the warming and cooling rates (deg C/decade) of the global oceans on a latitudinal-average (zonal-means) basis.  The vertical axis (y-axis) is scaled in deg C/decade.  The horizontal axis (x-axis) is scaled in degrees latitude, with the South Pole on the left at -90 (or 90S), with the North Pole on right at +90 (or 90N) and with the equator at the center at zero degrees latitude.

Regional ocean cooling to depths of 0-2000 meters is difficult to reconcile in a world where greenhouse gases are supposed to dominate climate.  If natural factors can cause the oceans to cool, they can also contribute to the warming.

For a couple of years, we’ve been illustrating and discussing how horrendously the latest and greatest climate models simulate the surface temperatures of the global oceans. See the most recent posts:

Some readers might suspect that if the models cannot simulate the surface temperatures of the oceans, they will prove no better when attempting to simulate the warming and cooling to depths of 2000 meters.  Unfortunately, the climate model outputs for subsurface ocean temperatures are not presented in formats so that they can be easily added to the KNMI Climate Explorer.  And it’s unlikely that the climate science community will present those model failings.

Research interest: the long-term aftereffects of El Niño and La Nina events on global sea surface temperature and ocean heat content. Author of the ebook Who Turned on the Heat? and regular contributor at WattsUpWithThat.
View all posts by Bob Tisdale →
This entry was posted in Ocean Depth Averaged Temperature. Bookmark the permalink.