I’ve added a graph of the difference between the observed global temperature anomalies (GISS LOTI) and the climate model simulations of that metric by the models stored in the CMIP5 archive (used by the IPCC for their 5th Assessment Report).  As a result of the hiatus (slowdown) in global surface warming, the current difference between the models and data is the largest (worst) it has been in about 100 years (based on a 61-month average).

INITIAL NOTES:  GISS LOTI, and the two lower troposphere temperature datasets are for the most recent month.  The HADCRUT4 and NCDC data lag one month.

This post contains graphs of running trends in global surface temperature anomalies for periods of 13+ and 17+ years using GISS global (land+ocean) surface temperature data.  They indicate that we have not seen a warming halt (based on 13-years+ trends) this long since the late-1970s or a warming slowdown (based on 17-years+ trends) since about 1980. I used to rotate the data suppliers for this portion of the update, also using NCDC and HADCRUT. With the data from those two suppliers normally lagging by a month in the updates, I’ve standardized on GISS for this portion.

Most of the update graphs in the following start in 1979.  That’s a commonly used start year for global temperature products because many of the satellite-based temperature datasets start then.

We discussed why the three suppliers of surface temperature data use different base years for anomalies in the post Why Aren’t Global Surface Temperature Data Produced in Absolute Form?

There are a number of ways to present how poorly climate models simulate global surface temperatures.  Normally they are compared in a time-series graph.  See the example here. In that example, GISS Land-Ocean Temperature Index (LOTI) data are compared to the multi-model mean of the climate models stored in the CMIP5 archive, which was used by the IPCC for their 5th Assessment Report. The data and model outputs have been smoothed with 61-month filters to reduce the monthly variations.

Another way to show how poorly climate models perform is to subtract the data from the average of the model outputs (model mean). We first presented and discussed this method using global surface temperatures in absolute form. (See the post On the Elusive Absolute Global Mean Surface Temperature – A Model-Data Comparison.)  The graph below shows a model-data difference using anomalies, where the data are represented by GISS global Land-Ocean Temperature Index (LOTI) and the model simulations of global surface temperature are represented by the multi-model mean of the models stored in the CMIP5 archive. To assure that the base years used for anomalies did not bias the graph, the full term of the data (1880 to 2013) were used as the reference period.

See the post On the Use of the Multi-Model Mean for a discussion of its use in mode-data comparisons. 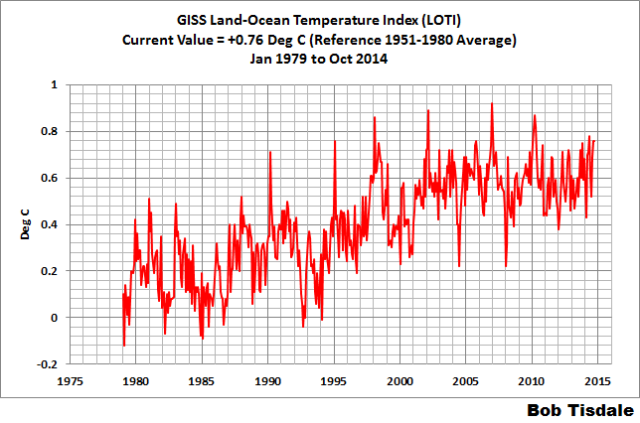 Note:  There have been recent changes to the GISS land-ocean temperature index data.  They have a noticeable impact on the short-term (1998 to present) trend as discussed in the post GISS Tweaks the Short-Term Global Temperature Trend Upwards.  The causes of the changes are unclear at present, but they will likely affect the 2014 rankings at year end.

The NCDC data source is through their Global Surface Temperature Anomalies webpage.  Click on the link to Anomalies and Index Data.)

We do not provide monthly means poleward of 82.5 degrees (or south of 70S for TLT) due to difficulties in merging measurements in these regions.

Also see the RSS MSU & AMSU Time Series Trend Browse Tool. RSS uses the base years of 1979 to 1998 for anomalies.

There is a noticeable difference between the RSS and UAH lower troposphere temperature anomaly data. Dr. Roy Spencer discussed this in his October 2011 blog post On the Divergence Between the UAH and RSS Global Temperature Records.  In summary, John Christy and Roy Spencer believe the divergence is caused by the use of data from different satellites.  UAH has used the NASA Aqua AMSU satellite in recent years, while as Dr. Spencer writes:

…RSS is still using the old NOAA-15 satellite which has a decaying orbit, to which they are then applying a diurnal cycle drift correction based upon a climate model, which does not quite match reality.

I updated the graphs in Roy Spencer’s post in On the Differences and Similarities between Global Surface Temperature and Lower Troposphere Temperature Anomaly Datasets.

While the two lower troposphere temperature datasets are different in recent years, UAH believes their data are correct, and, likewise, RSS believes their TLT data are correct.  Does the UAH data have a warming bias in recent years or does the RSS data have cooling bias?  Until the two suppliers can account for and agree on the differences, both are available for presentation.

In a more recent blog post, Roy Spencer has advised that the UAH lower troposphere Version 6 will be released soon and that it will reduce the difference between the UAH and RSS data.

As noted in my post Open Letter to the Royal Meteorological Society Regarding Dr. Trenberth’s Article “Has Global Warming Stalled?”, Kevin Trenberth of NCAR presented 10-year period-averaged temperatures in his article for the Royal Meteorological Society. He was attempting to show that the recent halt in global warming since 2001 was not unusual.  Kevin Trenberth conveniently overlooked the fact that, based on his selected start year of 2001, the halt at that time had lasted 12+ years, not 10.

An explanation of what’s being presented in Figure 6: The last data point in the graph is the linear trend (in deg C per decade) from January 2001 to October 2014. It is basically zero (about +0.02 deg C/Decade). That, of course, indicates global surface temperatures have not warmed to any great extent during the most recent 166-month period. Working back in time, the data point immediately before the last one represents the linear trend for the 166-month period of December 2000 to September 2014, and the data point before it shows the trend in deg C per decade for November 2000 to August 2014, and so on.

The highest recent rate of warming based on its linear trend occurred during the 166-month period that ended about 2004, but warming trends have dropped drastically since then.  There was a similar drop in the 1940s, and as you’ll recall, global surface temperatures remained relatively flat from the mid-1940s to the mid-1970s.  Also note that the mid-1970s was the last time there had been a 161-month period without global warming—before recently.

In his RMS article, Kevin Trenberth also conveniently overlooked the fact that the discussions about the warming halt are now for a time period of about 16 years, not 10 years—ever since David Rose’s DailyMail article titled “Global warming stopped 16 years ago, reveals Met Office report quietly released… and here is the chart to prove it”.  In my response to Trenberth’s article, I updated David Rose’s graph, noting that surface temperatures in April 2013 were basically the same as they were in October 1997.  We’ll use October 1997 as the start month for the running 17-year trends.  The period is now 209-months long.  The following graph is similar to the one above, except that it’s presenting running trends for 208-month periods.

The GISS, HADCRUT4 and NCDC global surface temperature anomalies and the RSS and UAH lower troposphere temperature anomalies are compared in the next three time-series graphs. Figure 8 compares the five global temperature anomaly products starting in 1979.  Again, due to the timing of this post, the HADCRUT4 and NCDC data lag the UAH, RSS and GISS products by a month.  The graph also includes the linear trends.  Because the three surface temperature datasets share common source data, (GISS and NCDC also use the same sea surface temperature data) it should come as no surprise that they are so similar.  For those wanting a closer look at the more recent wiggles and trends, Figure 9 starts in 1998, which was the start year used by von Storch et al (2013) Can climate models explain the recent stagnation in global warming?  They, of course, found that the CMIP3 (IPCC AR4) and CMIP5 (IPCC AR5) models could NOT explain the recent halt in warming.

Figure 10 starts in 2001, which was the year Kevin Trenberth chose for the start of the warming halt in his RMS article Has Global Warming Stalled?

Because the suppliers all use different base years for calculating anomalies, I’ve referenced them to a common 30-year period: 1981 to 2010.  Referring to their discussion under FAQ 9 here, according to NOAA: 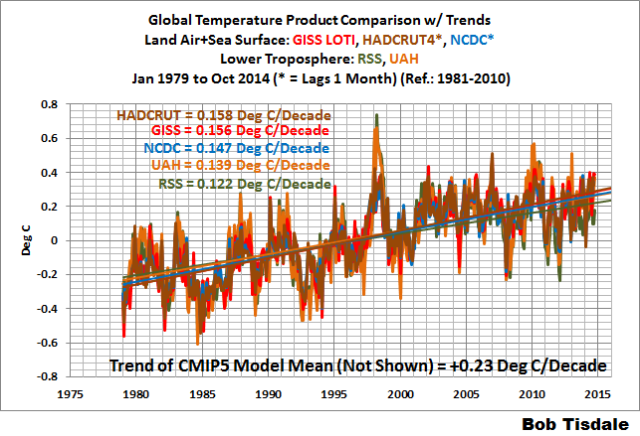 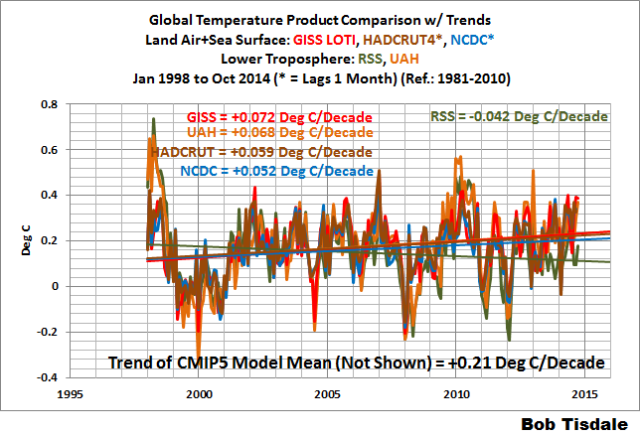 For those who want to get a rough idea of the impacts of the adjustments to the GISS and HADCRUT4 warming rates, refer to the July update—a month before those adjustments took effect.