UPDATE:  It has come to my attention that some persons believe I ridiculed Dr. Geert Jan van Oldenborgh and Dr. Roger Pielke Sr. in this post.  That was not my intent and, on rereading this post, is far from the truth.  I have the utmost respect for both climate scientists.  I simply used Dr. van Oldenborgh’s blog post as a springboard for this one.  Geert Jan has since written a follow-up post about lower troposphere temperature data.  See Is there a pause in the temperature of the lower troposphere?   And I referred to Dr. Pielke in this post for two reasons. First, he is known to skeptics, and, second, he agrees with Dr. van Oldenborgh about the importance of ocean warming.   I simply put ocean warming into terms that are more familiar with most readers…deg C, instead of 10^22 Joules.

My apologies to Geert Jan van Oldenborgh and Roger Pielke Sr. if they believed I was ridiculing them.  I was not.

The blog ClimateLabBook is hosted by Ed Hawkins of NCAS-Climate at the University of Reading.  A guest post Hiatuses in the rise of temperature by Geert Jan van Oldenborgh of the Royal Netherlands Meteorological Institute (KNMI) has gained some attention in the past few days.  Many of you will remember Dr. Geert Jan van Oldenborgh as the scientist at KNMI who created and maintains the KNMI Climate Explorer.  It is a marvelous tool that provides public access to numerous climate-related datasets, to the outputs of climate models stored in the CMIP3 and CMIP5 archives and to statistical analysis tools.  I will once again thank Dr. van Oldenborgh for the Climate Explorer.

Please take a few minutes to read Dr. van Oldenborgh’s post Hiatuses in the rise of temperature.  In it, he prefaces the discussion:

The old argument that the world is no longer warming was that the global mean temperature has ceased to increase after 1998.

He then provides a couple of interpretations of the hiatus.

The first is that there has been no warmer year than 1998.

He then goes on to discuss that surface temperatures have exceeded the 1998 value a couple of times in the 21st Century, so that definition of hiatus no longer works.  Then Dr. van Oldenborgh adds:

The second, better, interpretation of the argument that the earth is no longer warming would be that a trend line starting in 1998 would be zero or negative.

Both are very strict definitions of “hiatuses in the rise of temperature”.  I’m sure you can think of many others, including:

Dr. van Oldenborgh notes that a trend line of global land+sea surface temperatures starting in 1998 is positive so it does not comply with his second definition for the hiatus. He then states:

The new argument therefore is that the temperature has not risen over the last 10 years. This is indeed correct, both the GISTEMP series and the HadCRUT4 dataset in which missing areas have been interpolated by Cowtan & Way show a trend of 0.00 K/decade over 2005–2014. To investigate further why the trend has been zero since 2005 it is useful to consider the land and ocean separately.

Much of the remainder of Dr. van Oldenborgh blog post presents the problems associated with discussions of surface warming over that short a time period (2005 to 2014). His maps of surface temperature trends with starting years of 2003 and 2004, and his discussions of them under the heading of “Patterns” are very informative.

The first thing that struck me as I was reading the blog post was, there’s a dataset missing from the analysis—a dataset that is commonly used to represent global temperatures. That dataset, of course, is satellite-based Lower Troposphere Temperature, aka TLT, which is the temperature of the atmosphere from zero to about 12,500 meters (about 41,000 feet) above sea level, but dominated by samples at less than 3,000 meters (about 9,800 feet). Of the three satellite-based atmospheric temperature datasets, the lower troposphere data are nearest to the surface.

Figure 1 is a time series graph of the annual (November to October) lower troposphere temperature anomalies for the periods ending in 1980 to 2014. The two suppliers, RSS and UAH, are compared.  The anomaly for the year ending in October 2010 was the same as 1998 with the UAH data but cooler with the RSS data, so both would pass the “no warmer than 1998” test.

Figure 2 compares the linear trends of the two lower troposphere temperature anomaly datasets starting with the year ending October 1998.  The UAH data failed the “trend line starting in 1998 would be zero or negative” test while the RSS data passed. For the sake of argument, someone might want to average the two datasets.  Because the UAH warming rate is comparable to the RSS cooling rate, the trend line for the average would basically be zero.

NOTE:  I used the period of 1981 to 2010 as the reference years for anomalies in Figures 1 and 2, because the two suppliers use different base periods. [End note.]

The NODC does have subsurface ocean temperature datasets at depths of 0-100 meters, 0-700 meters and 0-2000 meters. They have recently been added to the KNMI Climate Explorer, on their Monthly observations webpage.  Figure 3 presents the vertically averaged temperature anomalies to depths of 0-2000 meters for the global oceans. The NODC depth averaged temperature data for the depths of 0-2000 meters starts in 2005 at the Climate Explorer, which is precisely the time period we’re looking for.  Even the IPCC acknowledges there are so few measurements of the temperatures at depth in the oceans prior to the ARGO era that the datasets from 1955 to the early 2000s cannot be used for global warming attribution studies.  See the post AMAZING: The IPCC May Have Provided Realistic Presentations of Ocean Heat Content Source Data. 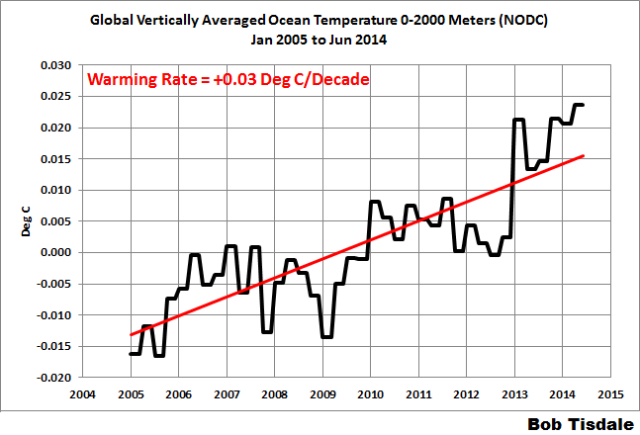 As we can see, yes, the oceans to depths of 2000 meters (about 1.25 miles) have warmed according to the NODC data, but note the warming rate.  It is only +0.03 deg C/decade.  That’s read 3 one-hundredths of a deg C per decade, which is a very tiny warming rate.  It would be even tinier if we had data for the oceans from the surface to the ocean floor.

The oceans are deeper than the 2000 meters reached by the ARGO floats.  So we have to look elsewhere to see if the deep oceans below 2000 meters have warmed. The title of Llovel et al. (2014) explains the findings of the paper Deep-ocean contribution to sea level and energy budget not detectable over the past decade.  “Not detectable” says it all. Phrased differently, there has been no detectable warming of the deep ocean (below 2000 meters) from January 2005 to December 2013, the time period covered by Llovel et al. (2014), which happily coincides to the period we’re discussing.

From the NOAA OceanToday webpage Deep ARGO, we learn that the depths of 0-2000 meters include only about one-half of the volume of the global oceans.

Based on those findings, we can assume the trend in the temperature of the oceans, from surface to ocean floor, from 2005 to present, is one-half the +0.03 deg C/decade trend calculated for the depths of 0-2000 meters, or a warming rate of +0.015 deg C/decade. That’s read 15 one-thousandths of a deg C per decade.

That minuscule warming rate of the oceans serves only as the background for the surface warming.  It can’t magically come back to haunt us.  That warming rate is trivial compared to the unrealized surface warming predicted by climate models.  See Figure 4, which presents the temperature anomaly difference between the GISS global land-ocean temperature index data and the simulations of global surface air temperatures based on the multi-model mean of the climate models used by the IPCC for their 5th Assessment Report. That graph is discussed in more detail at the beginning of the October 2014 Global Surface (Land+Ocean) and Lower Troposphere Temperature Anomaly & Model-Data Difference Update.

Global surface temperatures in 2014 are very likely to be at record high levels in 2014. We are going to see that framed in many ways in months to come.  However, we understand the reason for those record high levels to be the unusual warming of the eastern North Pacific.  See the June sea surface temperature update and the post On The Recent Record-High Global Sea Surface Temperatures – The Wheres and Whys.

The climate science community has also acknowledged that the weather-related unusual warming of the eastern extratropical North Pacific was the reason for the record high global surface temperatures this year.  See the post Axel Timmermann and Kevin Trenberth Highlight the Importance of Natural Variability in Global Warming…

On the other hand, as illustrated in this post, it is very likely that 2014 will not be at record high levels with another of the global temperature datasets, Lower Troposphere Temperature. Those are shown in Figures 1 and 2 above.

Ocean heat content during the ARGO era is a useful dataset, but when discussing global temperatures, the vertically averaged temperature data for the oceans is more appropriate.  While the oceans continue to warm, based on the NODC data, in terms of temperature, that warming is trivial.

And as illustrated in the final graph, the record high surface temperatures this year hardly put a dent in the difference between the observed and modeled surface warming.

PS:  Dr. van Oldenborgh’s  discussions of the short-term surface warming (or lack thereof) from 2005 to 2014 will make a lot more sense to the average person than some statistical analysis.

Research interest: the long-term aftereffects of El Niño and La Nina events on global sea surface temperature and ocean heat content. Author of the ebook Who Turned on the Heat? and regular contributor at WattsUpWithThat.
View all posts by Bob Tisdale →
This entry was posted in Hiatus, The Pause. Bookmark the permalink.