The overselling of calamities in environmental sciences has reached unseemly proportions…so much so in one field that in 2014 a team of marine researchers exposed the problems in a journal article. The paper is Duarte et al. (2014) Reconsidering Ocean Calamities. The abstract reads (my boldface):

The proliferation of a number of pressures affecting the ocean is leading to a growing concern that the state of the ocean is compromised, which is driving society into pessimism. Ocean calamities are disruptive changes to ocean ecosystems that have profound impacts and that are widespread or global in scope. However, scrutiny of ocean calamities to ensure that they can be confidently attributed to human drivers, operate at widespread or global scales, and cause severe disruptions of marine social-ecosystems shows that some of the problems fail to meet these requirements or that the evidence is equivocal. A number of biases internal and external to the scientific community contribute to perpetuating the perception of ocean calamities in the absence of robust evidence. An organized auditing of ocean calamities may deliver a more precise diagnosis of the status of the oceans, which may help to identify the most pressing problems that need be addressed to conserve a healthy ocean.

The state of the world’s seas is often painted as verging on catastrophe. But although some challenges are very real, others have been vastly overstated, researchers claim in a review paper. The team writes that scientists, journals and the media have fallen into a mode of groupthink that can damage the credibility of the ocean sciences. The controversial study exposes fault lines in the marine-science community.

Carlos Duarte, a marine biologist at the University of Western Australia in Perth, and his colleagues say that gloomy media reports about ocean issues such as invasive species and coral die-offs are not always based on actual observations. It is not just journalists who are to blame, they maintain: the marine research community “may not have remained sufficiently sceptical” on the topic. 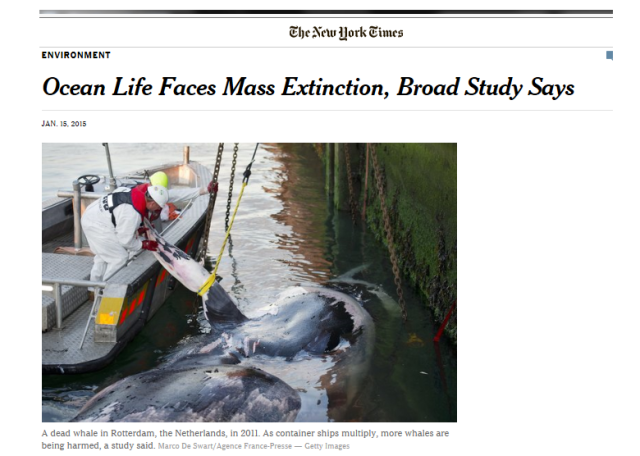 A brand new example of attempted overselling of calamities is the article in The New York Times Ocean Life Faces Mass Extinction, Broad Study Says. The article is based on the McCauley et al (2015) paper Marine defaunation: Animal loss in the global ocean.

[Thanks to Ruth Dixon for introducing us to Duarte et al. (2014) in a comment here at WUWT.]

Research interest: the long-term aftereffects of El Niño and La Nina events on global sea surface temperature and ocean heat content. Author of the ebook Who Turned on the Heat? and regular contributor at WattsUpWithThat.
View all posts by Bob Tisdale →
This entry was posted in Alarmism. Bookmark the permalink.