On the Pause in Global Sea Ice Anomalies

I just finished the illustrations and text for another chapter of my upcoming book. The latest was about sea ice data. I believe you’ll be interested in one of the topics from that chapter.  As noted in the title of the post, the topic is the “pause” in global sea ice extent anomalies.

There was a resurgence of sea ice globally in 2013 and 2014, however.  That recent resurgence allows us to present the data in another way.  We can use a linear trend analysis, starting in April 2015, to determine how far back in time we can go while the global sea ice extent data show no losses or no gains.  See Figure 1.  Based on the linear trend, there has been no loss (or gain) in global sea ice extent for 178 months…almost 15 years. 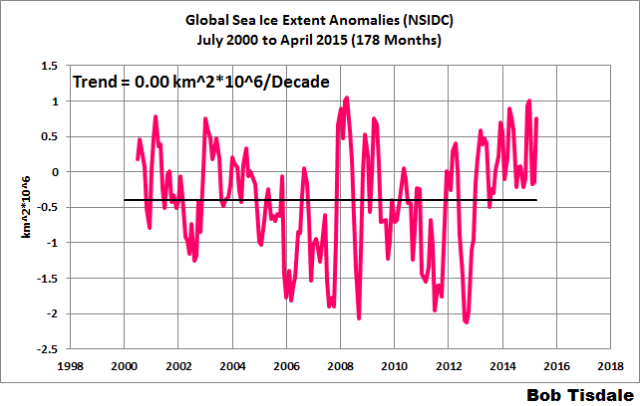 Note:  Anomalies were calculated against the WMO-preferred period of 1981-2010.

Let me try to counter in advance the misdirection by the CO2 obsessed.

One thing is for sure:  global sea ice is not cooperating with the climate models used by the IPCC for their prognostications of gloom and doom.

The NSIDC sea ice extent data are available in “daily” form during the satellite era.  In reality, the daily data only cover the period from July 9, 1987 to present, while, from October 26, 1978 to July 7, 1987, they were supplied every two days. They require a little effort to put them into monthly and annual formats.  The Northern Hemisphere data are available here, and the Southern Hemisphere data are here. The NSIDC maintain the data up-to-date at those links. For documentation, see the Arctic and Antarctic Sea Ice Concentrations from Multichannel Passive-Microwave Satellite Data Sets: October 1978 – September 1995 – User’s Guide.

Research interest: the long-term aftereffects of El Niño and La Nina events on global sea surface temperature and ocean heat content. Author of the ebook Who Turned on the Heat? and regular contributor at WattsUpWithThat.
View all posts by Bob Tisdale →
This entry was posted in Sea Ice. Bookmark the permalink.

26 Responses to On the Pause in Global Sea Ice Anomalies