As could be expected, the alarmist mainstream media have so far chosen to ignore a paper that discusses an upcoming multidecadal natural suppression of global warming…probably because indicates the slowdown in global warming should continue and it implies the natural variability of the North Atlantic contributed to the global warming we have seen since the mid-1970s. 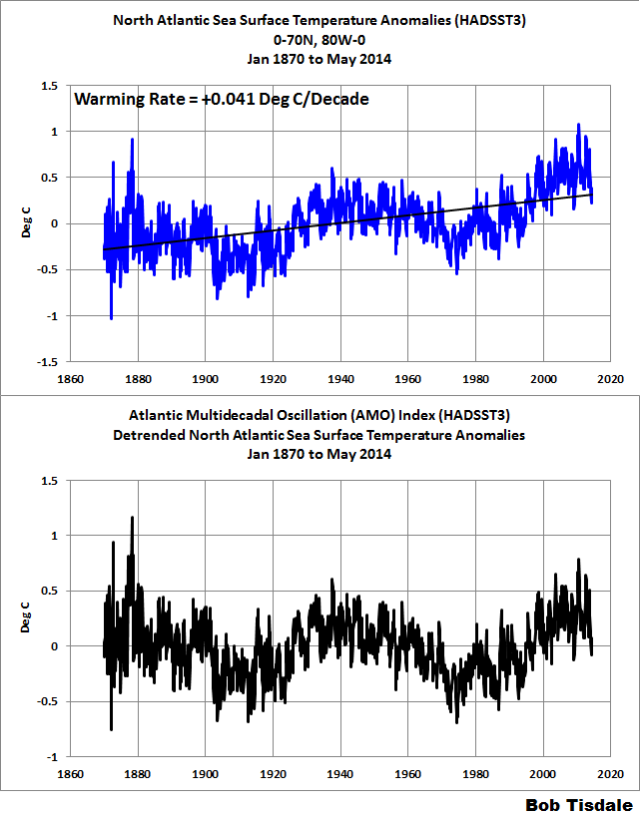 Note:  I borrowed the graphs in Figures 1 and 2 from my upcoming book, which I’ve been working on for more than a year.

According to the NOAA Frequently Asked Questions about the Atlantic Multidecadal Oscillation webpage, the AMO can enhance global warming or suppress it.

Looking at the comparison graph of global sea surface temperatures and those of the North Atlantic, Figure 2, we can see that the sea surface temperature anomalies of the North Atlantic often run in parallel with the global data. (The data have been smoothed in that illustration.) At those times, it isn’t enhancing global warming or suppressing it. 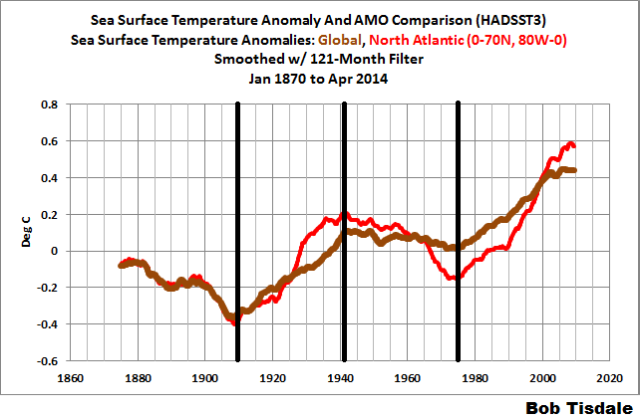 We see similar responses during the mid-20th Century cooling period and the late warming period. That is, the North Atlantic sea surface temperatures run in parallel with the global data for the initial 10 to 15 years of those periods.  It’s only after those initial periods that the North Atlantic either cools or warms more rapidly than the global data, which then enhances the cooling or warming.

McCarthy et al. created a new index based on the U.S. east coast tidal-gauge measurements of sea level north and south of Cape Hatteras, from Florida to Boston. They used the new sea level based index as a proxy for variations in ocean circulation of the North Atlantic. See their “accumulated sea level index” shown in blue in their Figure 3, which is also my Figure 3. 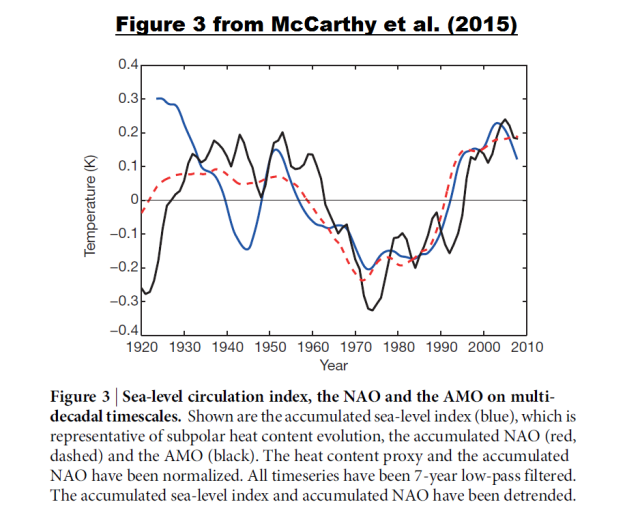 Decadal variability is a notable feature of the Atlantic Ocean and the climate of the regions it influences. Prominently, this is manifested in the Atlantic Multidecadal Oscillation (AMO) in sea surface temperatures. Positive (negative) phases of the AMO coincide with warmer (colder) North Atlantic sea surface temperatures. The AMO is linked with decadal climate fluctuations, such as Indian and Sahel rainfall1, European summer precipitation2, Atlantic hurricanes3 and variations in global temperatures4. It is widely believed that ocean circulation drives the phase changes of the AMO by controlling ocean heat content5. However, there are no direct observations of ocean circulation of sufficient length to support this, leading to questions about whether the AMO is controlled from another source6. Here we provide observational evidence of the widely hypothesized link between ocean circulation and the AMO. We take a new approach, using sea level along the east coast of the United States to estimate ocean circulation on decadal timescales. We show that ocean circulation responds to the first mode of Atlantic atmospheric forcing, the North Atlantic Oscillation, through circulation changes between the subtropical and subpolar gyres—the intergyre region7. These circulation changes affect the decadal evolution of North Atlantic heat content and, consequently, the phases of the AMO. The Atlantic overturning circulation is declining8 and the AMO is moving to a negative phase. This may offer a brief respite from the persistent rise of global temperatures4, but in the coupled system we describe, there are compensating effects. In this case, the negative AMO is associated with a continued acceleration of sea-level rise along the northeast coast of the United States9, 10.

The last two sentences are noteworthy. Good news: the surface temperatures of the North Atlantic are going to suppress global warming for the next couple of decades…after enhancing them for the past 3+ decades.  The bad news:  there will likely be an accelerated rise in sea level from Cape Hatteras to Boston during that time.

HEADING THE CO2-OBSESSED OFF AT THE PASS

I suspect the true blue believers in catastrophic human-induced global warming will attempt to downplay the role of the AMO by citing the curious paper Steinman et al. (2015), which clearly illustrated model failings, even though they were attempting (and failing) to make other points.  See the posts:

[My thanks to Marcel Crok and blogger Alec aka Daffy Duck for the heads-up.]

Research interest: the long-term aftereffects of El Niño and La Nina events on global sea surface temperature and ocean heat content. Author of the ebook Who Turned on the Heat? and regular contributor at WattsUpWithThat.
View all posts by Bob Tisdale →
This entry was posted in Atlantic Multidecadal Oscillation. Bookmark the permalink.