August 2015 Update for The Blob

This post provides background information and a quick update on the naturally occurring warming event in the eastern North Pacific known as The Blob. Not just any blob, The Blob. 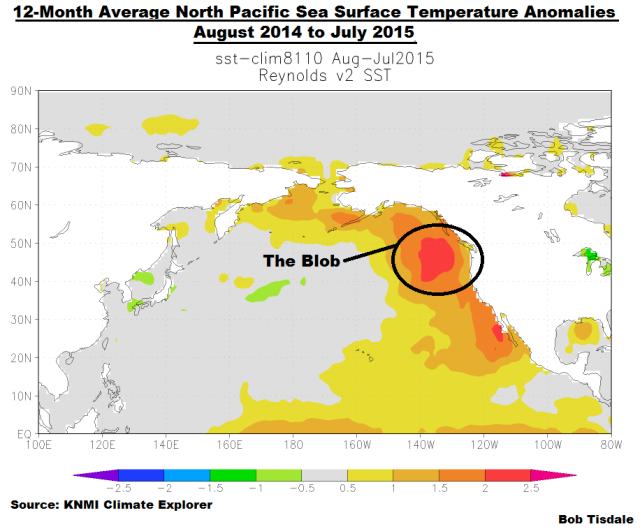 WHAT CAUSED THE BLOB?

Answer: According to Bond et al (2015), a persistent ridge of high pressure in the mid-to-high latitudes of the eastern North Pacific prevented the sea surfaces there from cooling normally. The Ridiculously Resilient Ridge is also responsible for the high temperatures and drought conditions along the west coast of the U.S.  See Anthony Watts’s April 2015 post “Warm blob” in Pacific Ocean not caused by climate change, affects U.S. weather at WattsUpWithThat.  It includes the press release for two papers: Bond et al. (2015) Causes and Impacts of the 2014 Warm Anomaly in the NE Pacific and Hartmann (2015) Pacific sea surface temperature and the winter of 2014.

WHAT’S NEW WITH THE BLOB?

Figure 2 presents the satellite-enhanced sea surface temperature anomalies (Reynolds OI.v2 data, not the pause-buster data) for The Blob, using the coordinates of 35N-55N, 150W-125W. The sea surfaces of The Blob continue to show warming, after a multidecadal period of no warming through 2012.

Based on the monthly data, Figure 3 shows the annual evolutions of The Blob’s sea surface temperature anomalies for the years 2012, 2013, 2014 and year-to-date 2015. Our base year with no warming is 2012. The majority of the warming took place in 2013. Then, in 2014, sea surface temperature anomalies ended a tick lower than they started in January. The sea surfaces of The Blob are once again warming in 2015, likely in response to the strengthening El Niño.

I closed the April 2015 Blob post with the following questions.  They’re still valid:

The data and maps presented in the post are available through the KNMI Climate Explorer.

Research interest: the long-term aftereffects of El Niño and La Nina events on global sea surface temperature and ocean heat content. Author of the ebook Who Turned on the Heat? and regular contributor at WattsUpWithThat.
View all posts by Bob Tisdale →
This entry was posted in Natural Warming, The Blob. Bookmark the permalink.

23 Responses to August 2015 Update for The Blob