I have not discussed the specifics of each product in this post.  If you’re new to the global temperature products presented here, see the dataset descriptions in the November 2015 Global Surface (Land+Ocean) and Lower Troposphere Temperature Anomaly & Model-Data Difference Update.

We illustrated the annual (January to December) lower troposphere temperature data in the recent post here. The meteorological-year (December to November) lower troposphere temperature anomalies from RSS (data here) and UAH (data here) are shown in Figure 1.  Like the annual data, they too show that the 2015 values came in a remote 3rd warmest for both products. 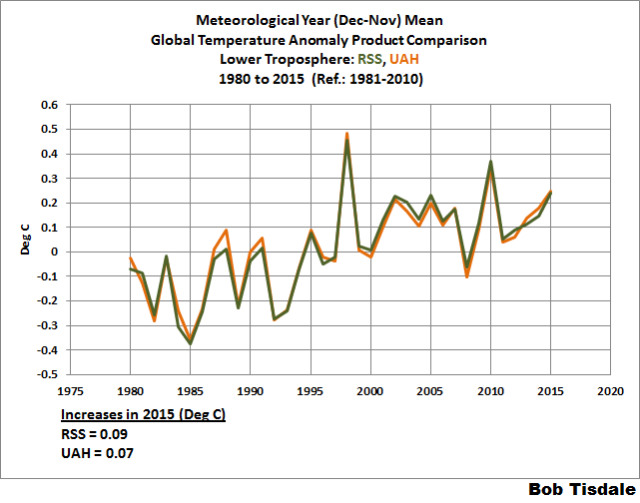 Then again, lower troposphere temperature anomalies are expected to rise sharply in 2016 in a lagged response to the 2015/16 El Niño. See the post Evolutions of Global Surface and Lower Troposphere Temperature Anomalies in Responses to the 1997/98 and 2015/16 El Niños.

NOTES: We discussed the primary reason for the 2014 record high (or near record high) surface temperatures numerous times.  See the series of posts about The Blob.  The cause of The Blob and its impacts on global surface temperatures were also discussed in the chapter titled General Discussion 2 – On the Claims of Record-High Global Surface Temperatures in 2014 in my (free) ebook On Global Warming and the Illusion of Control – Part 1 (25MB).  Also in the book, see the chapter General Discussion 3 – On the Reported Record High Global Surface Temperatures in 2015 – And Will Those Claims Continue in 2016?, which is an expansion of the September 2015 post Tired of the Claims of “Warmest Ever” Month and Year? They Will Likely Continue Next Year. 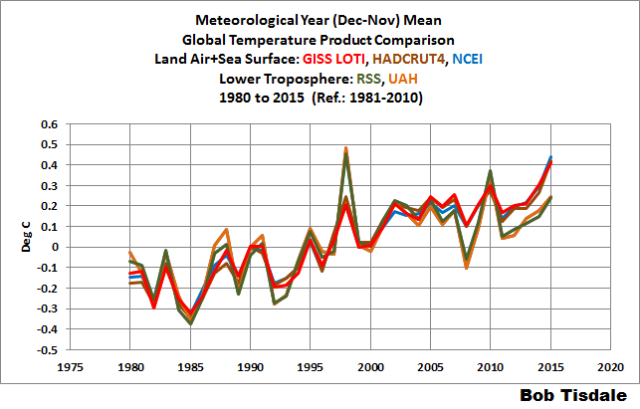 I don’t recall ever presenting lower troposphere and surface temperature comparisons where the data are smoothed with 5-year running-mean filters. See Figure 5. Global temperature data suppliers often use 5-year running-mean filters to reduce the annual wiggles associated with El Niño and La Niña events and with explosive volcanic eruptions (like El Chichon in 1982 and Mount Pinatubo in 1991).

The divergence between the two metrics stands out over the past decade.  I’ll let you speculate about that graph.

As soon as the surface temperature data suppliers furnish their December 2015 updates, I’ll provide a post similar to this.

NOAA is showing here that they will be releasing the December 2015 (and likely annual) data on January 20, 2016.  I suspect we’ll see combined NOAA/GISS online press conference like last year, with all sorts of alarmist hoopla being generated by the mainstream media about surface temperatures…while overlooking the lower troposphere temperatures.

Research interest: the long-term aftereffects of El Niño and La Nina events on global sea surface temperature and ocean heat content. Author of the ebook Who Turned on the Heat? and regular contributor at WattsUpWithThat.
View all posts by Bob Tisdale →
This entry was posted in Global Temperature Update, LOST Update, Lower Troposphere Temperature. Bookmark the permalink.