The satellite-measured temperature of the lower troposphere—the layer of Earth’s atmosphere that’s closest to the surface—has risen about 0.75 deg C (more than 1.3 deg F) in less than a year in 1997 and 1998, astounding climate scientists from around the world and confirming that man-made greenhouse gases are causing catastrophic global warming.

“At that rate”, a poultry scientist said, “in just a few years, eggs will cook inside the chickens.”

A paleoclimatologist who plays hockey in his spare time told this reporter, “Tree rings are growing at an unprecedented rate.  Bad for trees, good for hockey sticks.”

I received a Western Union telegram from the director of NASA’s Goddard Institute for Space Studies.  It read: 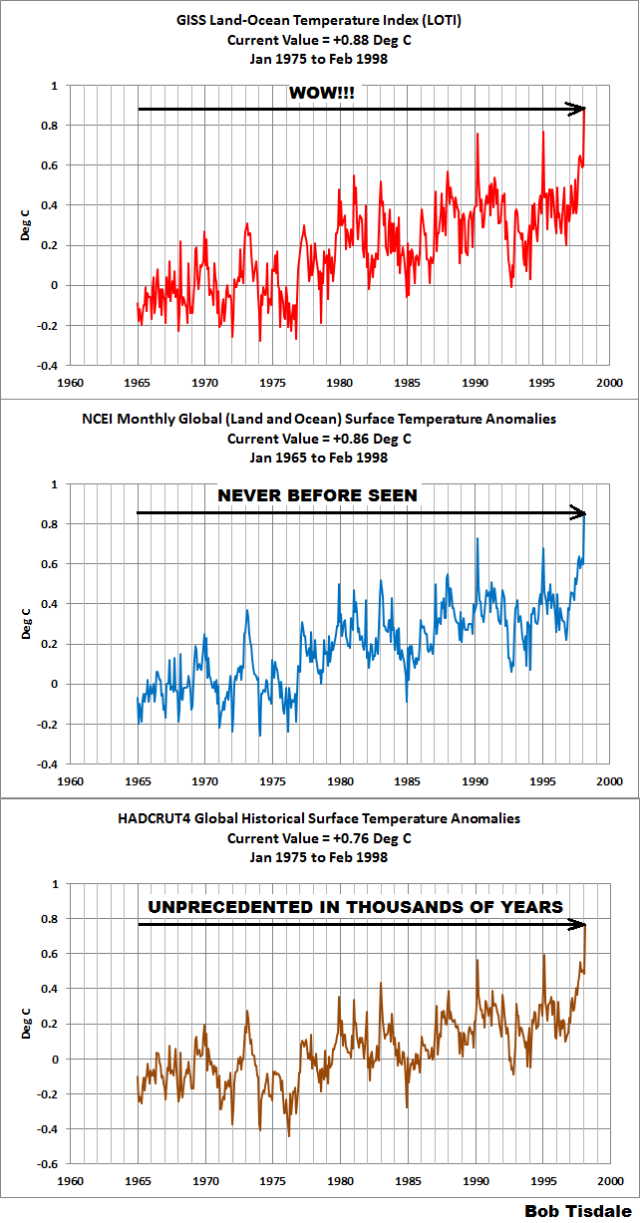 In response to reports of rising sea levels and marine species migrating to land to avoid boiling their brains in the overheated oceans, a representative of the bankrupt fishing industry reports, “People don’t need fishermen anymore, they just go into their backyards and pick up a flounder or two from their gardens.”

“Over the past year or so, global warming has accelerated to never-before-seen rates,” says a lead author of the reports from United Nation’s Intergovernmental Panel on Climate Change.  “Our climate models told us that we’d soon reach a tipping point. I believe we’ve reached it.”

An “independent researcher”, who requested anonymity, has a different perspective.  As he wrote in a fax:

The recent spike in global surface and lower troposphere temperatures is nothing to be concerned about.  It is how the Earth responds to an El Niño event.

That’s far too complex for this reporter to grasp, so I’ll continue to believe man-made greenhouse gases caused the recent spike in global temperatures.

Research interest: the long-term aftereffects of El Niño and La Nina events on global sea surface temperature and ocean heat content. Author of the ebook Who Turned on the Heat? and regular contributor at WattsUpWithThat.
View all posts by Bob Tisdale →
This entry was posted in Alarmism, Fun. Bookmark the permalink.