The post Controversy over comparing models with observations at Judith Curry’s Climate Etc. prompted this post.  Judith’s post includes a Twitter exchange and a couple of model-data comparison graphs furnished by Dr. Gavin Schmidt, the director of the Goddard Institute of Space Studies.  The one from Gavin for the global mid-troposphere temperature anomalies is included below as my Figure 1. The comparison includes of number datasets and the 95% model spread along with the model mean.

So, by using that 95% range or 95% spread, he’s limiting his leeway a tiny bit compared to the full ensemble.

That graph reminded me of the discussions of the illusions provided by the model spreads and ensembles from Chapter 2.11 – Different Ways to Present Climate Model Outputs in Time-Series Graphs: The Pros, the Cons and the Smoke and Mirrors of my free ebook On Global Warming and the Illusion of Control – Part 1.  The following is a portion of that chapter. Please see the full chapter for any clarifications on the models and data.  The figure numbers are as they are in the book. Also, in those discussions I used global surface temperatures, not mid-troposphere temperatures, the latter which was the subject of Judith Curry’s post, but the illusions created by the model ensemble or model spread are similar.  The data and model outputs ended in 2005 because this was a discussion of model hindcasts.  After 2005, the discussion turns to projections.

Start of Reprint from On Global Warming and the Illusion of Control – Part 1.

THE ILLUSION PROVIDED BY THE ENSEMBLE – LONG TERM

An ensemble of climate models (and a model envelope) gives the misleading illusion that all of the models provide the same basic warming rate, because we focus on the range of the upper and lower values.   For Figure 2.11-6, I’ve plotted the annual minimum and maximum anomalies from the ensemble, along with the trends of those high and low values. I’ve also included the data as a reference.

As shown, the trend of the annual highs is somewhat similar to the data and the annual lows have the same trend of the data.  Your eyes are drawn to those similarities in the ensemble…or the envelope when it’s used.

THE REALITIES OF THE MODELS CONTAINED IN THE ENSEMBLE – LONG TERM

Figure 2.11-7 presents the ensemble members with the highest and lowest long-term (1861-2005) warming rates.  I’ve also furnished the annual high and low values of the ensemble as a reference. 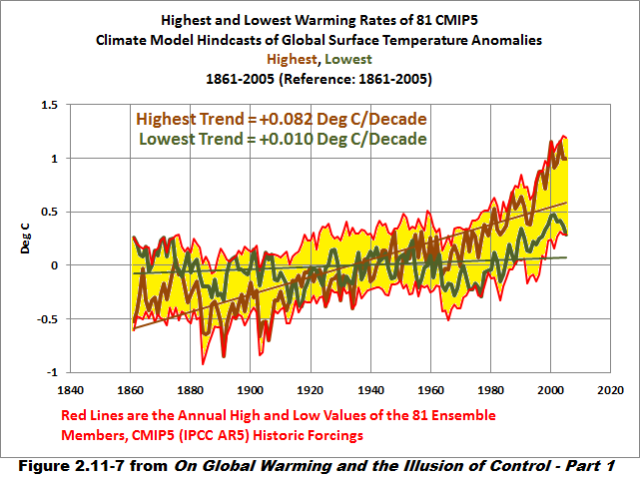 As noted earlier, the ensemble is made up of climate models that provide the wrong answers.

We’ll run through the same sequence of graphs, with the same 81 model hindcasts, using the same base years of 1861-2005 so that I can’t be accused of cherry-picking.  But in these graphs, we’ll only cover the recent warming period, which we’ll consider to have started in 1975.  Bottom line, the model-data comparisons will run from 1975 to 2005.

We’re also going to point out a few things that become obvious over this shorter term.

Figure 2.11-8 presents the 81 simulations of global surface temperature anomalies, along with the ensemble member mean and the Berkeley Earth surface temperature data.  The modelers claim victory because the data fall within the range of the models.

The same illusion exists when we look at a model ensemble (or a model envelope) over the shorter term…during the hindcast warming period of 1975 to 2005. See Figure 2.11-9.   The annual lows warm at a rate that’s a bit less than the data, and the annual highs show a trend that’s a bit higher.

As I noted earlier, your eyes are drawn to those similarities in trends of the upper and lower values in the ensemble…or the envelope when it’s used.

THE REALITIES OF THE MODELS CONTAINED IN THE ENSEMBLE – SHORT TERM, RECENT WARMING PERIOD

But the realities of the models are much different.  As shown in Figure 2.11-10, the lowest warming rate of an ensemble member is about +0.06 deg C/decade, while the highest trend of a model run is more than 5 times higher at about +0.33 deg C/decade.

Bottom line, the climate model ensemble (and the envelope) gives the illusion of much-better model performance.

End of Reprint from On Global Warming and the Illusion of Control – Part 1.

There was a discussion of trends in the Twitter exchange, and Gavin Schmidt furnished a histogram of the trends of model outputs versus the trends of a number of datasets with their uncertainties. See my Figure 2.

The histogram in Figure 2 confirms the illusion created the model spread in Figure 1.  It clearly shows that there is a wide range of modeled warming rates of mid-troposphere temperatures: from roughly +0.008 deg C/year (+0.08 deg C/decade) to about +0.035 deg C/year (+0.35 deg C/decade).

And Figure 2 also shows there is little agreement between the datasets on how much the mid-troposphere has warmed and great uncertainties in their warming rates.

The histogram also shows the peak trends of the bell-shape are greater than the trends of many of the datasets even considering their uncertainties.

Personally, I believe Judith Curry should present both of Gavin Schmidt’s graphs, Figure 1 for the illusion (models performing well) and Figure 2 for the reality (models performing not-so-well and the uncertainties of the data). I think she underestimates her audience.

Research interest: the long-term aftereffects of El Niño and La Nina events on global sea surface temperature and ocean heat content. Author of the ebook Who Turned on the Heat? and regular contributor at WattsUpWithThat.
View all posts by Bob Tisdale →
This entry was posted in Climate Model Failings, Model-Data LOST. Bookmark the permalink.