And Those Too-Cool Surface Temperatures Create Obvious Problems for Researchers

UPDATE:  The closing has been revised.

This post provides model-data comparisons of the sea surface temperatures for the portion of the North Atlantic where hurricanes tend to breed, also known as the Main Development Region.  I’ve used the coordinates of 10N-20N, 80W-20W for the Main Development Region.  See Figure 1 for a map of May 2016 sea surface temperatures of a portion of the North Atlantic, on which I’ve highlighted those coordinates.

As you’ll discover in this post, and as noted in its title, the sea surface temperatures, as simulated by the climate models used by the Intergovernmental Panel on Climate Change (IPCC) for their 5th Assessment Report (AR5), are too cool for the Main Development Region. The models’ differences with reality create significant problems for the modelers and their speculations about past, present and future hurricane strength and activity.

The climate models for this post are represented by the mean of the model outputs stored in the CMIP5 (Coupled Model Intercomparison Project Phase 5) archive, with historic forcings through 2005 and RCP8.5 forcings thereafter.  (The individual climate model outputs and model mean are available through the KNMI Climate Explorer.) The CMIP5-archived models were used by the IPCC for their 5th Assessment Report. The RCP8.5 forcings are the worst-case scenario.  We’re using the model-mean (the average of the climate model outputs) because the model-mean represents the consensus (the groupthink) of the modeling groups for how sea surface temperatures in this example should warm if they were warmed by the forcings that drive the models. See the post On the Use of the Multi-Model Mean for a further discussion of its use in model-data comparisons.

For the sea surface temperature data, we’re presenting the original version of the satellite-enhanced Optimum Interpolation Sea Surface temperature data from NOAA, commonly referred to as Reynolds OI.v2.   The original version of the Reynolds OI.v2 data is available on weekly and monthly bases, and at a 1-deg (latitude/longitude) resolution. The monthly Reynolds OI.v2 data are available from the KNMI Climate Explorer for the period of November 1981 to present. There they are identified as 1982-now: 1° NOAA (“Reynolds”) OI v2 SST.

NOTE:  We are not using the daily, high-resolution (0.25-deg latitude/longitude) version of the Reynolds OI.v2 data.  As illustrated in the post On the Monumental Differences in Warming Rates between Global Sea Surface Temperature Datasets during the NOAA-Picked Global-Warming Hiatus Period of 2000 to 2014, the daily, high-resolution version has been adjusted by NOAA so much that its warming rate for the period of 2000-2014 falls well above of the parametric uncertainty range of NOAA’s ERSST.v4 data.  See the discussion of Figure 6 from that post. [End note.]

Climate modelers prefer to show climate model outputs in anomaly form. (See the RealClimate post is Absolute temperatures and relative anomalies authored by Gavin Schmidt, Director of the Goddard Institute of Space Studies, GISS.  It’s worth the time to read it.)  In it, Gavin Schmidt was downplaying the need for climate models to simulate Earth’s absolute surface temperatures.  If we present a model-data comparison of the sea surface temperature for the main development region of the North Atlantic in anomaly form (the top graph in Figure 2), we would have to say that, based on the consensus of the models, the models do a very good job of simulating the warming of ocean surfaces there during the satellite era.  No surprise there.  The North Atlantic is one of the few ocean basins where models perform reasonably well at simulating warming rates during the satellite era.  See Part 2 of the most recent model-data comparison of sea surface temperatures here. 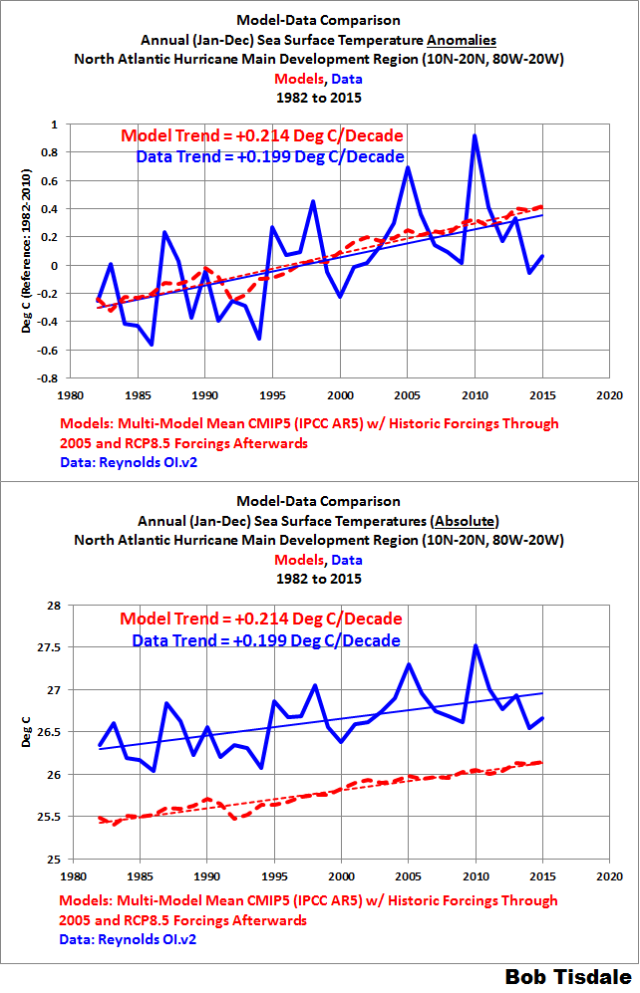 But if we look at the model outputs and data in absolute form, we can see that the models are simulating ocean surfaces that are too cool. See the bottom graph in Figure 2. For the period of 1982-2015, the models are about 0.8 deg C cooler than the observations.

It’s only 0.8 deg C, someone might be saying. But let’s look at the annual cycles (modeled and observed) in the sea surface temperatures there, based on the averages for the period of 1986 to 2015, the last 30 years…because climate is typically defined as 30 years of data. See the top graph in Figure 3.

[Note:  The following paragraphs have been updated for clarification purposes. The simulations of tropical cyclones in the CMIP-archived climate models are still trouble filled, except in specialized models and when forced with sea surface temperature data. See the IPCC’s discussion of tropical cyclones in climate models in Chapter 9 – Evaluation of Climate Models of the IPCC’s 5th Assessment Report (my boldface).

It was concluded in the AR4 that high-resolution AGCMs generally reproduced the frequency and distribution, but underestimated inten­sity of tropical cyclones (Randall et al., 2007). Since then, Mizuta et al. (2012) have shown that a newer version of the MRI-AGCM with improved parameterizations (at 20 km horizontal resolution) simulates tropical cyclones as intense as those observed with improved distri­bution as well. Another remarkable finding since the AR4 is that the observed year-to-year count variability of Atlantic hurricanes can be well simulated by modestly high resolution (100 km or finer) AGCMs forced by observed SST, though with less skill in other basins (Larow et al., 2008; Zhao et al., 2009; Strachan et al., 2013). Vortices that have some characteristics of tropical cyclones can also be detected and tracked in AOGCMs in CMIP3 and 5, but their intensities are generally too weak (Yokoi et al., 2009a; Yokoi et al., 2012; Tory et al., 2013; Walsh et al., 2013).

How can researchers hope to use the non-specialized climate models stored in the CMIP archives for the study of North Atlantic hurricanes when (1) the average of the modeled sea surface temperatures for the Main Development Region are too cool…and when (2) the average model has a sea surface temperature-based hurricane season that’s too short as a result of being too cool…and (3) when the consensus of the simulations of main development region climate is out of synch with reality by about 35 years?

One approach is to “bias correct” the sea surface temperatures in climate model outputs to account for “model drift” before estimating hurricane activity.  This was the approach taken by Caron et al. (2013) Multi-year prediction skill of Atlantic hurricane activity in CMIP5 decadal hindcasts.

All the climate science community has ever provided is speculations of past, present and future climate…and all of that speculation is based on multimillion-dollar simulations of fantasy worlds, not the real world.

Do taxpayers around the globe know policymakers are creating global warming policies that are based on climate model simulations of fantasy worlds…fantasy worlds that bear little relationship to the planet on which we live?

This is the second post in which we compared the annual cycles of modeled and observed surface temperatures in a region critical to climate change. The first post was about Greenland Surface Air Temperatures.

UPDATE:  I made a minor revision to the text a few minutes after publishing this.

Research interest: the long-term aftereffects of El Niño and La Nina events on global sea surface temperature and ocean heat content. Author of the ebook Who Turned on the Heat? and regular contributor at WattsUpWithThat.
View all posts by Bob Tisdale →
This entry was posted in Hurricanes, Model-Data Comparison SST. Bookmark the permalink.