The New RSS TLT Data is Unbelievable! (Or Would That Be Better Said, Not Believable?) A quick Introduction

As you likely know, I haven’t published a monthly global temperature update in almost 2 years. Since then, in July 2017, RSS released their version 4.0 lower troposphere temperature (TLT) anomaly data. See the RSS webpage FAQ about the V4.0 TLT Update for more insights.

While preparing this month’s global temperature update, I downloaded the new global RSS TLT version 4.0 data for the first time and compared it to the UAH TLT data and to the three surface temperature datasets from NASA GISS, NOAA NCEI and the UKMO Hadley Centre—with all datasets starting in January 1979 and all referenced to the base years of 1981-2010. The new RSS TLT data shocked me, to say the least. (Expletives deleted.)  See Figure 1. 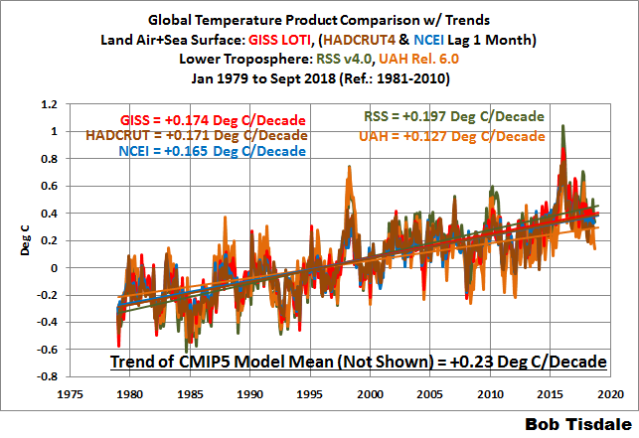 Note that, from January 1979 to October 2018, the new RSS TLT warming rate is even higher than all three surface temperature datasets. Un-flip-flopping-believable! 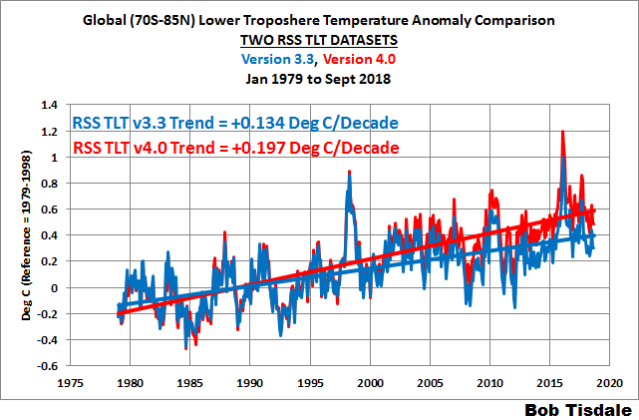 And for anyone interested, Figure 3 presents the difference between the two RSS TLT datasets with the version 3.3 data subtracted from the version 4.0 data. 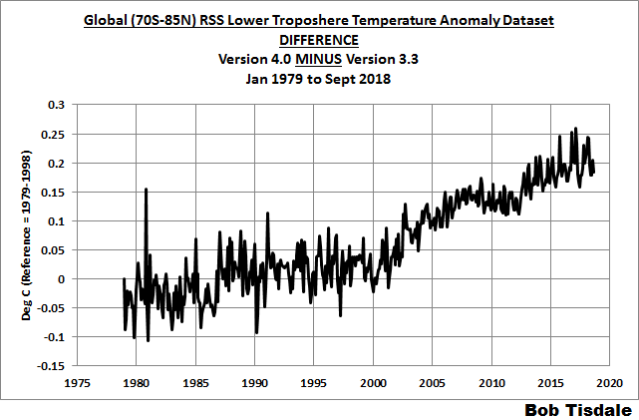 WHAT DR. ROY SPENCER HAD TO SAY!

COMMENTS ABOUT THE NEW RSS TLT DATA, ANYONE?

I have a funny feeling this post will generate a couple of comments…hmmmm probably lots of comments at WUWT. Have fun!!!

That’s it for now. I’ll publish the full monthly update very soon.  It’s almost ready.  I just have to rewrite the text for the RSS data.  Oy!  I’ll try to remain civil.

Research interest: the long-term aftereffects of El Niño and La Nina events on global sea surface temperature and ocean heat content. Author of the ebook Who Turned on the Heat? and regular contributor at WattsUpWithThat.
View all posts by Bob Tisdale →
This entry was posted in TLT and LOST Updates. Bookmark the permalink.

35 Responses to The New RSS TLT Data is Unbelievable! (Or Would That Be Better Said, Not Believable?) A quick Introduction