Alarmists Will NOT Like This Part of the Recently Published U.S. Climate Science Special Report

The caption for their Figure 6.3 reads:

Observed changes in the coldest and warmest daily temperatures (°F) of the year in the contiguous United States. Maps (top) depict changes at stations; changes are the difference between the average for present-day (1986–2016) and the average for the first half of the last century (1901–1960). Time series (bottom) depict the area-weighted average for the contiguous United States. Estimates are derived from long-term stations with minimal missing data in the Global Historical Climatology Network–Daily dataset.16 (Figure source: NOAA/NCEI).

For those having trouble reading the graphs and maps, see the individual cells below. 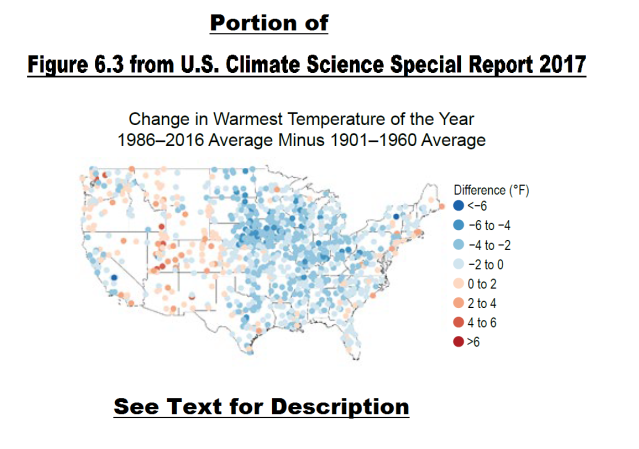 The caption for Table 6.2 reads:

Table 6.2. Observed changes in the coldest and warmest daily temperatures (°F) of the year for each National Climate Assessment region in the contiguous United States. Changes are the difference between the average for present-day (1986–2016) and the average for the first half of the last century (1901–1960). Estimates are derived from long-term stations with minimal missing data in the Global Historical Climatology Network–Daily dataset.16

And for your viewing pleasure, here’s their Table 6.2: 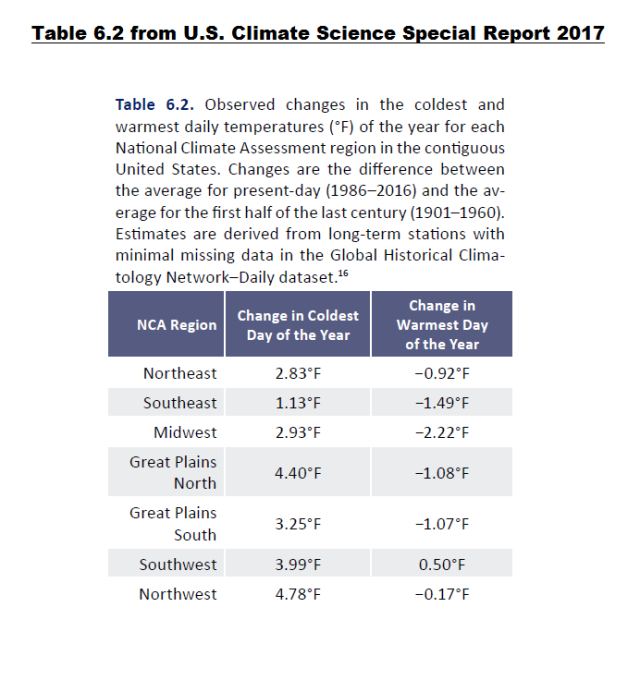 The caption for their Figure 6.4 reads:

The text for that section reads:

Shifts in temperature extremes are examined using a suite of societally relevant climate change indices14 ,15 derived from long-term observations of daily surface temperature.16 The coldest and warmest temperatures of the year are of particular relevance given their widespread use in engineering, agricultural, and other sectoral applications (for example, extreme annual design conditions by the American Society of Heating, Refrigeration, and Air Conditioning; plant hardiness zones by the U.S. Department of Agriculture). Cold waves and heat waves (that is, extended periods of below or above normal temperature) are likewise of great importance because of their numerous societal and environmental impacts, which span from human health to plant and animal phenology. Changes are considered for a spectrum of event frequencies and intensities, ranging from the typical annual extreme to the 1-in-10 year event (an extreme that only has a 10% chance of occurrence in any given year). The discussion focuses on the contiguous United States; Alaska, Hawai‘i, and the Caribbean do not have a sufficient number of long-term stations for a century-scale analysis.

Cold extremes have become less severe over the past century. For example, the coldest daily temperature of the year has increased at most locations in the contiguous United States (Figure 6.3). All regions experienced net increases (Table 6.2), with the largest rises in the Northern Great Plains and the Northwest (roughly 4.5°F [2.5°C]), and the smallest in the Southeast (about 1.0°F [0.6°C]). In general, there were increases throughout the record, with a slight acceleration in recent decades (Figure 6.3). The temperature of extremely cold days (1-in-10 year events) generally exhibited the same pattern of increases as the coldest daily temperature of the year. Consistent with these increases, the number of cool nights per year (those with a minimum temperature below the 10th percentile for 1961–1990) declined in all regions, with much of the West having decreases of roughly two weeks. The frequency of cold waves (6-day periods with a minimum temperature below the 10th percentile for 1961–1990) has fallen over the past century (Figure 6.4). The frequency of intense cold waves (4-day, 1-in-5 year events) peaked in the 1980s and then reached record-low levels in the 2000s.17

Changes in warm extremes are more nuanced than changes in cold extremes. For instance, the warmest daily temperature of the year increased in some parts of the West over the past century (Figure 6.3), but there were decreases in almost all locations east of the Rocky Mountains. In fact, all eastern regions experienced a net decrease (Table 6.2), most notably the Midwest (about 2.2°F [1.2°C]) and the Southeast (roughly 1.5°F [0.8°C]). The decreases in the eastern half of Nation, particularly in the Great Plains, are mainly tied to the unprecedented summer heat of the 1930s Dust Bowl era, which was exacerbated by land-surface feedbacks driven by springtime precipitation deficits and land mismanagement.18 However, anthropogenic aerosol forcing may also have reduced summer temperatures in the Northeast and Southeast from the early 1950s to the mid-1970s,19 and agricultural intensification may have suppressed the hottest extremes in the Midwest.20 Since the mid-1960s, there has been only a very slight increase in the warmest daily temperature of the year (amidst large interannual variability). Heat waves (6-day periods with a maximum temperature above the 90th percentile for 1961–1990) increased in frequency until the mid-1930s, became considerably less common through the mid-1960s, and increased in frequency again thereafter (Figure 6.4). As with warm daily temperatures, heat wave magnitude reached a maximum in the 1930s. The frequency of intense heat waves (4-day, 1-in-5 year events) has generally increased since the 1960s in most regions except the Midwest and the Great Plains.17 ,21 Since the early 1980s (Figure 6.4), there is suggestive evidence of a slight increase in the intensity of heat waves nationwide14 as well as an increase in the concurrence of droughts and heat waves.22

AND NOW FOR THE ODDEST GRAPH IN THE REPORT

After discussing and illustrating how heat waves and daily high temperatures have decreased since the 1930s, the report continues:

The caption for their Figure 6.5 reads:

Observed changes in the occurrence of record-setting daily temperatures in the contiguous United States. Red bars indicate a year with more daily record highs than daily record lows, while blue bars indicate a year with more record lows than highs. The height of the bar indicates the ratio of record highs to lows (red) or of record lows to highs (blue). For example, a ratio of 2:1 for a blue bar means that there were twice as many record daily lows as daily record highs that year. Estimates are derived from long-term stations with minimal missing data in the Global Historical Climatology Network–Daily dataset.16 (Figure source: NOAA/NCEI).

That graph is so silly it’s laughable. After they present something as nonsensical as that, do they expect us to take the rest of the report seriously?

My Figures 1 and 2 show the seasonal maximum temperatures (TMAX) and minimum temperatures (TMIN) for the contiguous U.S. so that you can see which seasons are showing increases in TMIN and TMAX and what season is showing no increase in TMAX. The data for the graphs in my Figures 1 and 2 can be retrieved through the NOAA webpage here.   More specifically, the NOAA data page that includes the monthly TMIN and TMAX in absolute form in deg F used to be available here. Good thing I archived it here

BACK TO THE CLIMATE SCIENCE SPECIAL REPORT

I’ll let you comment on that nonsense. That’s it for now.

Have fun in the comments and enjoy the remainder of your day.

3 Responses to Alarmists Will NOT Like This Part of the Recently Published U.S. Climate Science Special Report