Alternate Title: An Average of Climate Models, Which Individually Give Wrong Answers, Cannot, By Averaging Them, Give the Right Answer, So A Model Mean Can Be Very Misleading. And The Use of Anomalies in Model-Data Comparisons, When Absolute Values Are Known, Can Also Be Very Misleading

For the purposes of examples only, I’m going to initially present comparison graphs of monthly global land-ocean surface temperature data and model outputs, all of which include (roughly) 3.5 to 4 deg C annual cycles. Why am I presenting model-data comparisons with overlapping annual cycles, you ask? There’s something very unusual about a couple of ensemble members from the CMIP5 archive (the simulations with Historic & RCP8.5 Forcings) when you compare them to the Berkeley Earth data. You’ve got to see this to believe it! I couldn’t make this up. And they provide wonderful lead-ins to a discussion of one of the climate science community’s favorite presentation devices, the multi-model mean, and they provide wonderful lead-ins to a discussion of anomalies.

The climate science community regularly averages the outputs of climate model simulations of Earth’s climate for use in scientific studies. For example, they may call the average a multi-model mean or a multi-model ensemble-member mean, depending on the groups of model outputs they’re averaging. I’m providing the model-data comparisons, because they provide wonderful examples of why averaging a bunch of models that individually give the wrong answers CANNOT hope to provide the correct answer. The model mean is simply an average of models that provide the wrong answers. Or, if you like, the climate model mean is a consensus of wrong answers, with some more wrong than others. And that, after a good number of decades, is what we expect from climate science—a consensus of wrong answers—because the foundation of climate science is global politics.

THE DATA AND CLIMATE MODELS

Climate model outputs from the CMIP5 archive, which was used by the IPCC for their 5th assessment report, are available from the KNMI Climate Explorer. For the models in this post, I’m using models with historic and RCP8.5 forcings, and I’ve selected the climate model ensemble members that provide the warmest and coolest average surface temperature during the period of 1850 to 1900, which the IPCC now uses for pre-industrial conditions. That is, of the simulations of global mean Surface Air Temperatures (TAS), from 90S-90N, from the 81 individual ensemble members, these two examples provide the warmest and coolest global mean surface temperatures during the period of 1850 to 1900. The coolest (lowest average absolute GMST for the period of 1850-1900) is identified as IPSL-CM5A-LR EM-3 at the KNMI Climate Explorer, and the warmest (highest average absolute GMST for the period of 1850-1900) is identified there as GISS-E2-H p3. The average global mean surface temperatures for the other 79 ensemble members during preindustrial times reside somewhere between the two ensemble members shown in this post. The two ensemble members are the same model outputs used in the recent post What Was Earth’s Preindustrial Global Mean Surface Temperature, In Absolute Terms Not Anomalies?. The WattsUpWithThat cross post is here.

As you’ll recall from that post, for the IPCC-defined pre-industrial period of 1850 to 1900, there is a 3-deg C difference between the global mean surface temperatures of the ensemble member IPSL-CM5A-LR EM-3 (at 12.0 deg C) and the ensemble member GISS-E2-H p3 (at 15.0 deg C). You might say, they’ve got the actual global mean surface temperature surrounded.

Figure 1 is a model-data comparison of monthly global mean surface temperatures in absolute form. With the overlaps of the model and data annual cycles, it’s pretty difficult to see what’s so unusual about the model output and the data.

Figures 2 and 3 present the model and data individually. It’s still difficult to see what’s so unusual. 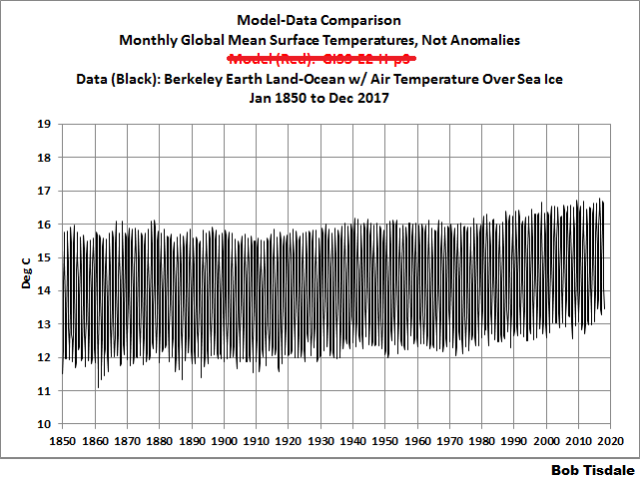 So, to make it easier to see, in Figure 4 (click to enlarge), I’ve illustrated the two graphs (Figure 2 and 3) side by side, with the data on the left, and the GISS ensemble member on the right.

And to confirm that the 1850s in the model align with most-recent decade (2008-2017) of the data’s global mean surface temperatures, see Figure 5. In it, I’ve compared the 10-year-average annual cycles in monthly model and data global mean surface temperatures, with 2008-2017 used for the data and 1850-1859 used for the GISS-E2-H p3 ensemble member.

If it wasn’t for the nearly 160-year difference in time, I’d be willing to admit that there’s a reasonable agreement in the annual cycles. Unfortunately for the GISS-E2-H p3 ensemble member, the 158-year difference does exist between the model and data.

Now, in Figures 6 through 10, we’ll run through the similar sequence of model-data comparison graphs for the Berkeley Earth global mean surface temperature data and the output of the IPSL-CM5A-LR EM-3’s simulation of it. 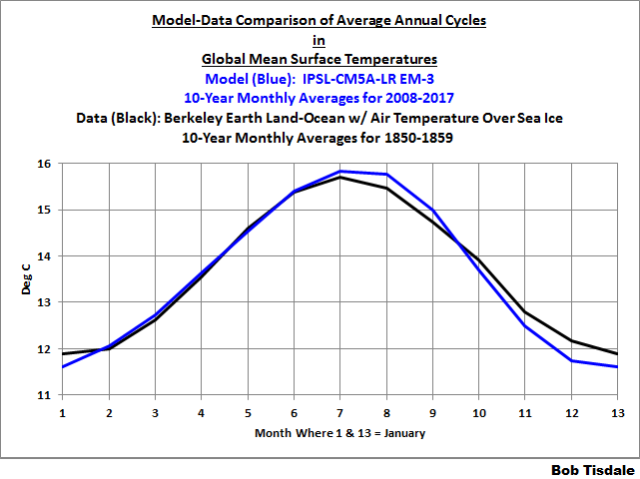 Yup! That’s right. As shown in Figures 9 and 10, the global mean surface temperatures of the first ten years of the data (1850-1859) align with the global mean surface temperatures of the last ten years of the IPSL-CM5A-LR EM-3 ensemble member (2008-2017). The IPSL-CM5A-LR EM-3 ensemble member could also be said to be off in terms of time, but in this case, based on the point at which the model and data align, the ensemble member is almost 16 decades too soon with respect to the observations-based data.

As I said in the opening, you’ve got to see this to believe it! I couldn’t make this up.

Above, using two worst-case examples, we’ve seen how poorly two CMIP5-archived climate models actually simulate global mean surface temperatures as represented by data. Now it’s time for the catch. We’re assuming the values of the adjustment factors provided by Berkeley Earth for their data are correct. Berkeley Earth doesn’t cite the source of the adjustment factors. If they do somewhere and I’ve missed it, please correct me and provide a link in the comments. [See the update at the end of the post.]

Based on how closely the average of the two extremely poor ensemble members matches the data, I suspect Berkeley Earth used the model mean of one of the groups of historic simulations associated with one of RCP scenarios. Don’t know for sure, but I’ll look. Maybe one of the regular denizens at WattsUpWithThat who work with Berkeley Earth will provide the answer and save me some time. [See the update at the end of the post.]

Regardless, the graphs in this post were provided as examples…fun examples. I could just as easily have used modeled and observed sea surface temperatures where the data are in absolute form and also furnished in anomaly form.

Figure 12 includes two model-data comparisons of global mean surface temperatures in time-series format for the period of 1850 to 2017. In the top graph, the data and ensemble member outputs are presented absolute form, while, in the bottom graph, they’re presented in anomaly form, referenced to the often-used period of 1951-1980.

As noted at the bottom of Figure 12, If You Were a Climate Scientist And You Wanted to Illustrate How Well a Group of Terrible Climate Models Simulated Global Mean Surface Temperatures—Or Any Other Metric—Would You Present Them in Absolute or Anomaly Form? Also, Would You Present the Model Mean or the Scattered Individuals? Consider that the next time you read any climate science report with model-data comparisons.

Again, in the top graph, even though the individual ensemble members have provided the wrong answers when compared to the data, when we average the wrong answers, we get something close to the correct answer as represented by the data.

Let’s put that in perspective as it relates to the oft-cited climate model ensemble members that use historic forcings to simulate past climate as far back as 1850 and RCP8.5 forcings for computer-aided, crystal-ball-like prognostications of the future under an unrealistic future scenario. A multi-model mean of 81 ensemble members, where the models are all giving wrong answers, some worse than others, simply provides us with a consensus of the wrong answers. And to compound that, the RCP8.5 scenario is, more and more often as days go by, being found to be unrealistic.

And in the bottom graph, the same climate model outputs and data are compared, but this time in anomaly form. Look at how much better the models appear to simulate the long-term observed global mean surface temperatures. Keep those two graphs in mind the next time someone presents a model-data comparison with the data and model outputs presented in anomaly form…and try not to laugh.

Oh, go ahead and laugh, we might as well have fun while we endure this nonsense.

Oops, almost forgot. I need to thank Berkeley Earth for publishing those monthly conversion factors. I had a lot of fun preparing this post, and I couldn’t have done it without those factors.

That’s it for this post. Have fun in the comments and enjoy the rest of your day.

And there are people who wonder why I’m a heretic of the religion of human-induced global warming/climate change. At least I’m a happy heretic. I laugh all the time about the nonsense prepared by whiny alarmists.

Our approach is different. we use kriging

Temperature at a location is decompsoted into a 2 elements: A climate element and a weather element

F(Lat, Elevation) is the climate element. It states that part of the temperature is a function of the latitude
of the station and the elevation of a station. Think of this as a regression. ( short aside, there is also a seasonal compoment)

if you take MONTHLY averages then you can show that over 90% of the monthly mean is explained by the latitude of the station and the elevation of the station ( Willis showed something similar with
satitille temps) Using this regreession approach allows you to predict temperatures where you have no
observations. A simple example would be you have the temperature at the base of hill and you can predict the temperture up to the peak… with error of course, but we know what those errors look like.

This “climate” part of the temperature is then subtracted from T

This is the “residual” the 10% that is not explained by latitude and elevation. We call this
“weather” Its this residual that changes over time.

After decomposing the Temperature into a fixed climate ( F(L,E)) and a varaiable weather component
we then use krigging to interpolate the weather feild.

The Temp we give you is the absolute T. the source is the observations.

PS: Will I continue to present model-data comparisons using a multi-model mean or a multi-model ensemble-member mean?  Of course I will, because I use them to show how poorly the consensus (better said group think) of the climate modeling groups, as represented by the model means, simulates a given metric, usually sea surface temperatures in absolute form or 30-year trends in global mean surface temperatures.  And now I have this post to link to those future posts.

Research interest: the long-term aftereffects of El Niño and La Nina events on global sea surface temperature and ocean heat content. Author of the ebook Who Turned on the Heat? and regular contributor at WattsUpWithThat.
View all posts by Bob Tisdale →
This entry was posted in Global Warming in Perspective, Model-Data LOST. Bookmark the permalink.