I enjoy surprises in data, especially when they might make alarmists unhappy.

Note: I used the monthly conversion factors listed on the Berkeley Earth data page for Greenland to return the monthly anomaly data to their original (not anomaly) form and then determined the annual averages. [End note.] 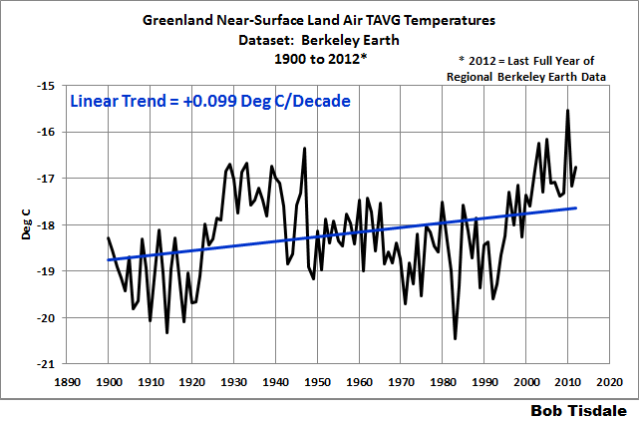 With the relative large multidecadal variations in the data, it seemed as though I was taking the trend of one and a half cycles of a sine wave.  That prompted me to start the graph in January 1925 and check the linear trend again.  See Figure 2.  Imagine that: a flat linear trend of Greenland land surface TAVG temperatures from 1925 to 2012. 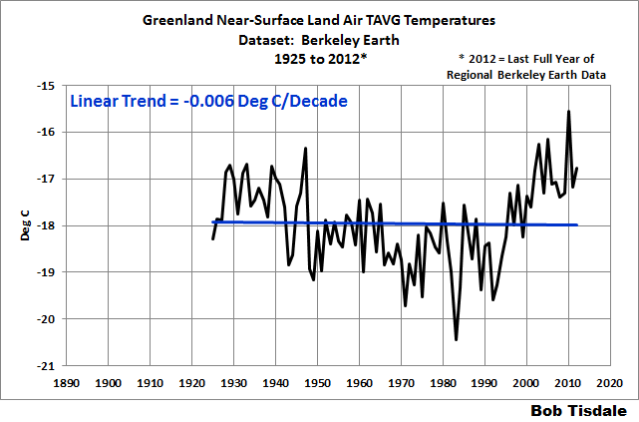 Are you wondering if the climate models stored in the CMIP5 archived (which was used by the IPCC for their 5th Assessment Report) showed a similar not-warming trend for the same time period? Wonder no longer. See Figure 3.

The climate model outputs, the CMIP5 multi-model mean, are available from the KNMI Climate Explorer. For Greenland, I used the coordinates of 59.78N-83.63N, 73.26W-11.31W, which are listed on the Berkeley Earth data page for Greenland, under the heading of “The current region is characterized by…”. The simulations presented use historic forcings through 2005 and RCP8.5 forcings thereafter.  I use the model mean, because it represents the consensus (better said, group-think) of the climate modeling groups who provided climate model outputs to the CMIP5 archive, for use by the IPCC for their 5th Assessment Report. 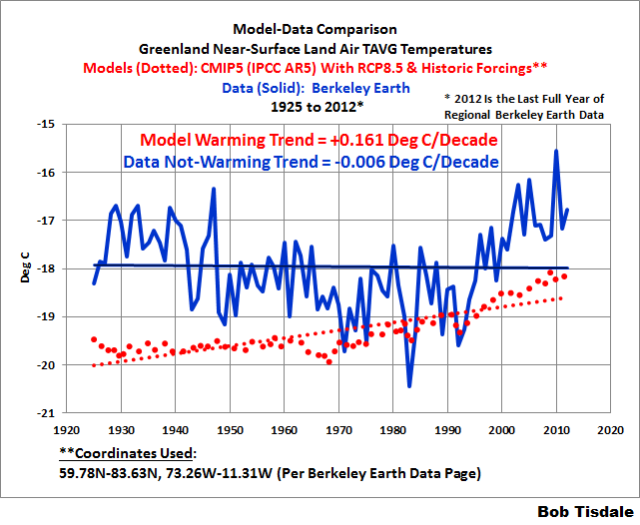 For those who would prefer to see the full spread of the model outputs in a model-data comparison, you may want to think again. See Figure 4.  It’s a graph created by the KNMI Climate Explorer of the 81 ensemble members of the climate models submitted to the CMIP5 archive, with historic and RCP8.5 forcings, for Greenland land surface temperatures, based on the coordinates listed above. There appears to be roughly an 8-deg C spread from coolest to warmest model.  Well, that narrows it down. It’s just another example of how the climate models used by the IPCC for their long-term prognostications of global warming are not simulating Earth’s Climate. Each time I plot a model-data comparison, I find it remarkable (and not in a good way) that anyone would find climate model simulations of Earth’s climate, and their simulations of future climate based on bogus crystal-ball-like prognostications of future forcings, to be credible. 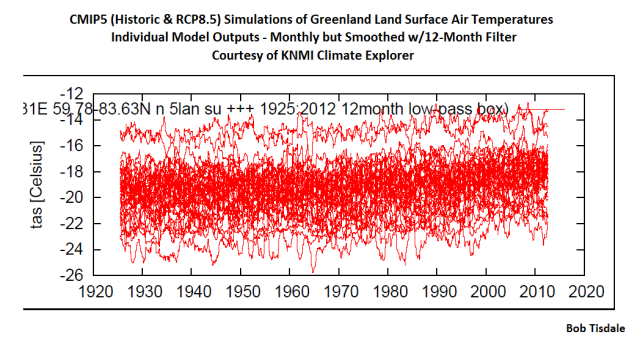 Back to the multi-model mean: Figure 5 presents the observed and climate-model-simulated multidecadal (30-year) trends in Greenland near-surface land air temperatures, from 1900 to 2012.  Once again, the models are clearly not simulating Earth’s climate. 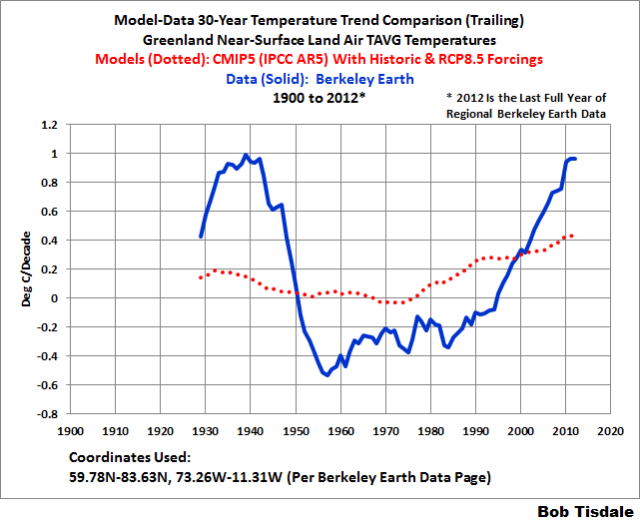 I’ll let you comment about that. We’ve already discussed and illustrated back in 2012 how climate models do not (cannot) properly simulate polar amplification.  See the post Polar Amplification: Observations Versus IPCC Climate Models.  The WattsUpWithThat cross post is here.

That’s it for this post. Enjoy the rest of your day and have fun in the comments.

Research interest: the long-term aftereffects of El Niño and La Nina events on global sea surface temperature and ocean heat content. Author of the ebook Who Turned on the Heat? and regular contributor at WattsUpWithThat.
View all posts by Bob Tisdale →
This entry was posted in Model-Data Comparison LSAT. Bookmark the permalink.