…PLUS AN OBVIOUS ERROR IN THE NEW NOAA ERSST.V4 PAPER

We’ve discussed NOAA’s new ERSST.v4 “pauses-buster” sea surface temperature reconstruction in a number of posts this year.  They are linked at the end of this post.  We can add yet another curiosity to the list…this time relating to the global ERSST.v4 data during the first half of the 20th Century.  Additionally, there is an error in a new paper about the NOAA ERSST.v4 that I want to discuss as well.

This post was prompted by a paragraph in NOAA’s recent paper about the uncertainties of their ERSST.v4 sea surface temperature reconstruction.  That paper is Huang et al. (2015b) Further Exploring and Quantifying Uncertainties for Extended Reconstructed Sea Surface Temperature (ERSST) Version 4 (v4), which is presently available (paywalled) as an Early Online Release.   Two things in the following paragraph caught my eye (my boldface):

A recent study (Karl et al. 2015) indicated that the trend of globally averaged SST in ERSST.v4 in the most recent decades (0.99°C century-1; 2000-2014) is as large as in the longer period of 1951-2012 (0.88°C century-1). Figure 6b shows the histogram of the trend during the longer period. The trend ranges from 0.7°C to 1.0°C century-1, which is higher than the long term trend shown in Figure 6a, indicating stronger oceanic warming since the middle of the 20th Century. Factor analyses indicate that the major contributor to this trend uncertainty is the ship-buoy adjustment (the 9th parameter; Fig. 7b). 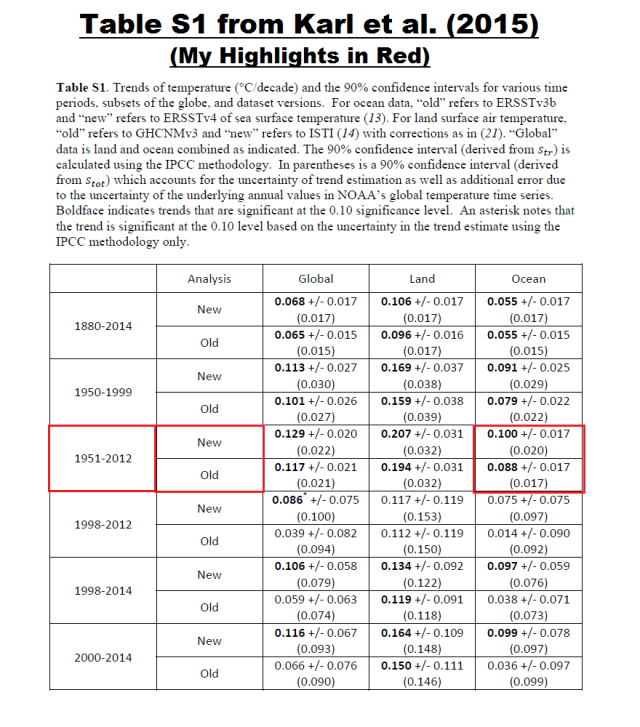 Looks like the peer reviewers missed an obvious mistake.

Curiously, but not surprisingly, the actual sea surface temperature data trends align with, or are near to, the extreme high end trends in the uncertainty histograms.

And if you’re wondering about the ERSST.v4 data trend for the period of 1901 to 2014 (Cell a in Figure 6 from Huang et al. 2015b), the data for the latitudes of 60S-60N (global excluding the polar oceans) present a linear trend of 0.073 deg C/decade (0.73 deg C/century)….once again toward the high end of the histogram.  (Data available through the KNMI Climate Explorer.)

Figure 2 (and Figures 3 through 5) include global (60S-60N) ocean surface temperature anomalies referenced to the period of 1971-2000, from top to bottom:

Huang et al. included trends for the periods of 1901-2014 and 1951-2012, using two different end years. For ease of illustration, I ended the data for both periods in 2012. That also agrees with the periods shown in Table 2.5 from Chapter 2 of the IPCC’s 5th Assessment Report. The exception to the 2012 end year is the HadNMAT2 data, which run through 2010 because the dataset ends then.

The data suppliers account for sea ice differently…thus the use of the latitudes of 60S-60N.

Figure 3 includes trend comparisons for the five ocean surface temperature products, but this time comparing the warming rates for 1901-1950 and 1901-2012.

The “new” and “old” NOAA sea surface temperature products show slightly higher warming rates for 1901-1950 than they do for 1901-2012. On the other hand, the UKMO’s HadNMAT2, HADSST3 and HadISST show noticeably higher warming trends for the early period of 1901-1950.

The exception is NOAA’s new ERSST.v4 “pauses buster” data, which show a noticeably lower warming rate in the first half of the 20th Century.

Someone is bound to note that we’re not comparing periods of equal length. So, for Figure 5, I ended the later period in 2000, breaking the 20th Century in two. 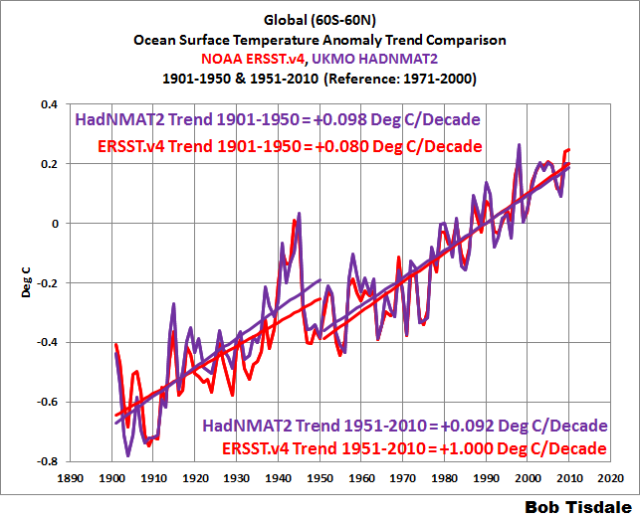 Did NOAA adjustment (modify, tweak, manipulate, etc.) their ERSST.v4 “pauses-buster” sea surface temperature data during the first half of the 20th Century so that the ocean surfaces showed a slight acceleration in global sea surface warming for 1951-2012?   The other ocean surface temperature datasets don’t show the same disparity over those two time periods.  If fact, the UKMO’s HADSST3 dataset (which like ERSST.v4 is also adjusted for bucket, ship inlet and buoy biases) shows a noticeably higher warming rate for 1901-1950 than for 1951-2012.

In previous posts at WattsUpWithThat and at my blog ClimateObservations, I’ve discussed the new NOAA “pause-buster” sea surface temperature dataset (ERSST.v4) a number of times since the publication of Karl et al. (2015)—latest to earliest:

Many thanks to those readers on the cross post at WattsUpWithThat who found all of the typos.  My apologies.

Research interest: the long-term aftereffects of El Niño and La Nina events on global sea surface temperature and ocean heat content. Author of the ebook Who Turned on the Heat? and regular contributor at WattsUpWithThat.
View all posts by Bob Tisdale →
This entry was posted in NOAA ERSST.v4. Bookmark the permalink.