Plus a Few Freebees at the End of the Post

The sea surface temperature anomalies of the NINO3.4 region of the equatorial Pacific are bordered by the coordinates of 5S-5N, 170W-120W.  They are used by NOAA and other meteorological agencies to define when an El Niño event is taking place.  According to the most-recent weekly satellite-enhanced data, the temperature anomalies for that region have dropped below the +0.5 deg C threshold between El Niño and ENSO-neutral phases, the latter of which is the “normal” phase of the tropical Pacific when neither El Niño or La Niña are taking place.

The weekly NINO3.4 region sea surface temperature anomaly data for Figures 1 and 2 are from the NOAA/CPC Monthly Atmospheric & SST Indices webpage, specifically the data here.  The base years for anomalies for the NOAA/CPC data are referenced to the WMO-preferred 30-year period of 1981-2010. 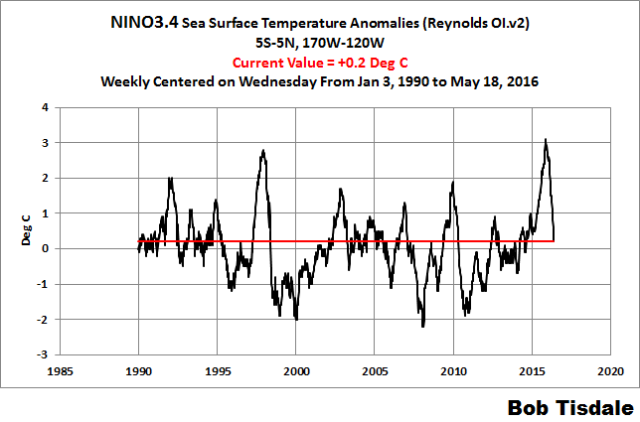 And for Figure 2, the evolutions of the NINO3.4-region sea surface temperature anomalies in 2015/16 are compared to 1997/98, another very strong El Niño.  Recall that 2015 started the year at or near El Niño conditions, where that was not the case in 1997.

And for those interested, Animation 1 includes the last two months of sea surface temperature anomaly maps from CMC.

I’ll provide a full ENSO update in a week or two.

SOME FREEBEES FOR READERS

Toward the end of most of the posts included in the 2014/15 El Niño series and the 2015/16 El Niño series, I’ve advertised my ebook Who Turned on the Heat? – The Unexpected Global Warming Culprit, El Niño Southern Oscillation. I thank all of you who have purchased a copy of that very-detailed discussion of (1) the fascinating processes that drive El Niño and La Niña events and (2) the aftereffects of sunlight-fueled strong El Niños that cause global temperatures to rise naturally.

My ebook Who Turned on the Heat? – The Unexpected Global Warming Culprit, El Niño-Southern Oscillation IS NOW FREE.  Click here for a copy (23MB .pdf).

Climate Models Fail is another of my ebooks.  Published back in 2012, it discussed the poor performance of climate models. It is also free.  Click here for a copy.

Those of course are now added to my most-recent ebook On Global Warming and the Illusion of Control – Part 1, which was originally offered free of charge. Click here for a copy.

Research interest: the long-term aftereffects of El Niño and La Nina events on global sea surface temperature and ocean heat content. Author of the ebook Who Turned on the Heat? and regular contributor at WattsUpWithThat.
View all posts by Bob Tisdale →
This entry was posted in 2015-16 El Nino Series, ENSO Update. Bookmark the permalink.