AND Is that the Reason Why This El Niño is Not Suppressing the California Drought as Expected?

El Niño events come in different flavors, and those different flavors can have differing impacts on regional weather around the globe. There are East Pacific El Niño events like the 1997/98 El Niño, and there are Central Pacific El Niños (a.k.a. El Niño Modoki) like the one in 2009/10. See the maps shown in Figure 1. Where does the 2015/16 El Niño fall and why does it matter?

If the 2015/16 El Niño has the characteristics of an El Niño Modoki (Central Pacific El Niño), it may provide a possible answer for why some parts of California have not been flooded as they were during the 1997/98 El Niño…have not had the drought conditions lessened as much as had been hoped when the 2015/16 El Niño developed last year. See the ABC News article El Nino Leaves Much of Drought-Stricken California in Dust. (Yes, I understand there are forecasts for significant rainfall and snow in California this weekend. See California Drought: Big weekend storms coming with rain, snow, strong winds in the San Jose Mercury News.) Also see Is El Niño AWOL? at the NOAA ENSO Blog for other discussions.

Based on the EOF2 pattern presented in Figure 2b and the PC2 time series shown in Figure 3, we derive an El Niño Modoki index (EMI). Because of the unique tripolar nature of the SSTA, the index is defined as follows:

UPDATE:  Blogger tadchem on the cross post at WUWT noted that my original Figure 2 (Cell b of Figure 2 from Ashok et al. (2007)) showed the wrong coordinates on the map for Region B.  I missed that error in the original Figure 2. I’ve replaced that map with one from the JAMSTEC El Niño Modoki webpage. Thanks tadchem.  [End update.]

However, Cell a shows that there is no correlation of DJF California precipitation with the El Niño Modoki Index.

WHERE DOES THE CURRENT EL NIÑO FALL ON THE EL NIÑO MODOKI INDEX?

Unfortunately, being based on HADISST data, the monthly El Niño Modoki Index lags a few months. So I’ve included the weekly El Niño Modoki Index data for the 2-year periods of 1997/98, 2009/10 and 2015/2016 (year-to-date) in Figure 4. I’ve included a dashed line at 0.7 (Standardized EMI) as the threshold of an El Niño Modoki. It must be kept in mind, however, that Ashok et al. used that 0.7 value for the 4-month period of June-July-August-September (JJAS) and the 3-month period of December-January-February (DJF). 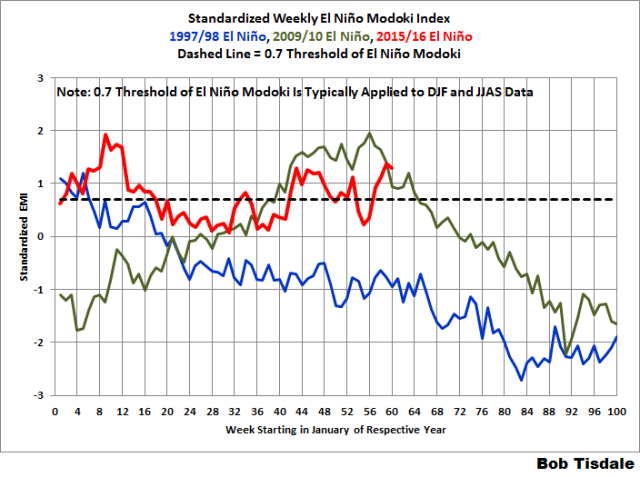 The 2015/16 El Niño has cycled back and forth across the threshold of an El Niño Modoki for about the last 18 weeks.

Using a 12-week running-mean filter, Figure 5, we can see that the most recent 12-week average is above the 0.7 threshold of an El Niño Modoki. In other words, for the months of December-January-February (DJF), the 2015/16 El Niño should qualify as an El Niño Modoki. 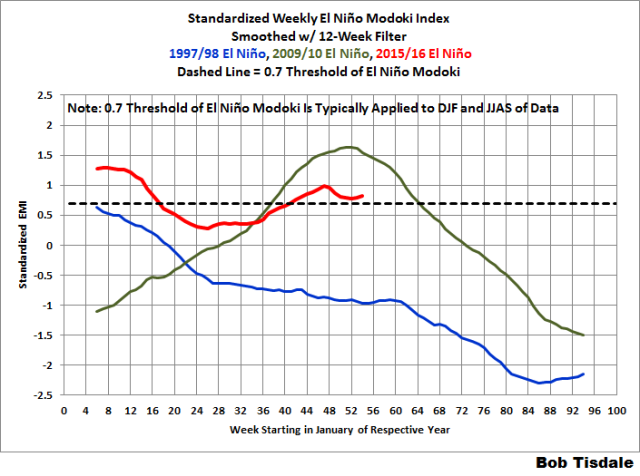 There had been hope, and there continues to be hope, that the 2015/16 El Niño will help to lessen the drought conditions throughout California. If the precipitation in California does not meet expectations, I suspect some researchers will point to the El Niño Modoki Index as the basis for those shortcomings.