In the post Is Ocean Heat Content Data All It’s Stacked Up to Be? I explained all of the problems associated with Ocean Heat Content data, in great detail.  For that post, I created three gif animations that showed where temperature measurements were taken at three different depths. The intent of the animations was to show how few samples existed at depth throughout the global oceans before the introduction of ARGO floats.

I was examining the approved Chapter 3 (Observations: Ocean) of the IPCC’s 5th Assessment Report when I came across their Figure 3.A.2.  I was amazed, especially with the bottom 2 cells. Figure 3.A.2 appears to be a realistic presentation of temperature sampling at depth. 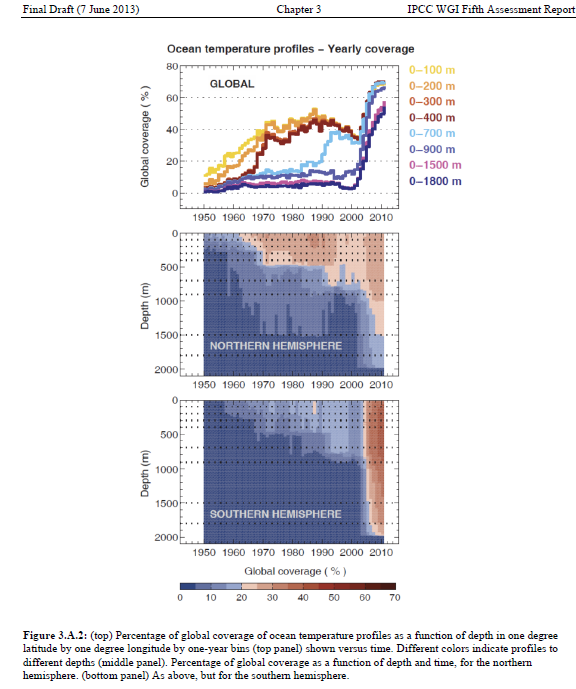 A larger-sized version is here.

The bottom cell shows that temperature samples at depth did not rise above 20% coverage of the oceans in the Southern Hemisphere until the ARGO floats were introduced in the mid-2000s, and at depths below 900 meters the coverage was less than 5% before ARGO.

The Northern Hemisphere (middle cell) was better sampled, but anything is better than nothing.  Most of the sampling there was confined to depths of less than 500 meters from the late-1960s to present.

And looking at the top cell, sampling at depths of 0-1500 meters and 0-1800 meters did not rise above 8% of the global oceans until the ARGO era.  Consider that the next time you see the NODC’s ocean heat content data for 0-2000 meters extending back in time to 1955.  Measurements for 0-900 meters had less than 16% coverage before ARGO.  Sampling at depths of 0-700 meters did not reach 20% coverage of the global oceans until about 1990.

I’ve noted this a number of times before:  the NODC should be commended for the amount of work that went into assembling all of the data required for their ocean heat content datasets.

But the NODC cannot be praised for their portrayal of their ocean heat content data as a globally complete dataset with little uncertainty.

In addition to Is Ocean Heat Content Data All It’s Stacked Up to Be?, refer to the following posts about ocean heat content.  And for those who like to read at comments on blog threads, I’ve also included the cross posts at WattsUpWithThat in parentheses:

Refer also to the discussions of the natural warming of the global oceans (including ocean heat content) in my illustrated essay “The Manmade Global Warming Challenge” (42mb).

Speaking of amazing, I haven’t promoted my ebooks Climate Models Fail or Who Turned on the Heat? anywhere in this post.

Research interest: the long-term aftereffects of El Niño and La Nina events on global sea surface temperature and ocean heat content. Author of the ebook Who Turned on the Heat? and regular contributor at WattsUpWithThat.
View all posts by Bob Tisdale →
This entry was posted in Ocean Heat Content Problems. Bookmark the permalink.

20 Responses to AMAZING: The IPCC May Have Provided Realistic Presentations of Ocean Heat Content Source Data