Back to your regularly scheduled update:

Initial Notes:  This post contains graphs of running trends in global surface temperature anomalies for periods of 13+ and 16+ years using HADCRUT4 global (land+ocean) surface temperature data.  They indicate that we have not seen a warming halt (based on 13 years+ trends) this long since the late-1970s or a warming slowdown (based on 16-years+ trends) since about 1980.

Most of the update graphs in the following start in 1979.  That’s a commonly used start year for global temperature products because many of the satellite-based temperature datasets start then.

We discussed why the three suppliers use different base years for anomalies in the post Why Aren’t Global Surface Temperature Data Produced in Absolute Form? 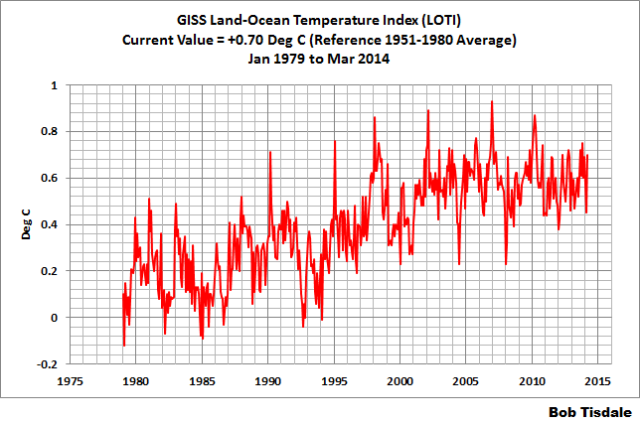 The NCDC data source is usually here.  NCDC uses 1901 to 2000 for the base years for anomalies. (Note: the NCDC has been slow with updating the normal data source webpage, so I’ve used the value listed on their State of the Climate Report for this month.) 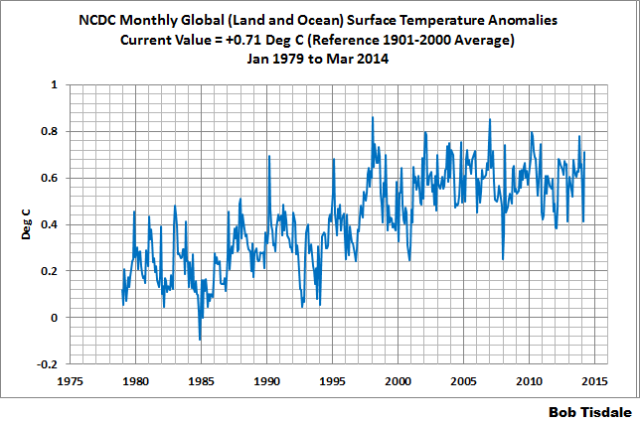 Update (Lags One Month):  The February 2013 HADCRUT4 global temperature anomaly is +0.30 deg C. See Figure 3.  It plummeted (about +0.21 deg C) since January 2014, as the other two datasets did in February.  But both of the other datasets showed a rebound in March.

As noted in my post Open Letter to the Royal Meteorological Society Regarding Dr. Trenberth’s Article “Has Global Warming Stalled?”, Kevin Trenberth of NCAR presented 10-year period-averaged temperatures in his article for the Royal Meteorological Society. He was attempting to show that the recent halt in global warming since 2001 was not unusual.  Kevin Trenberth conveniently overlooked the fact that, based on his selected start year of 2001, the halt at that time had lasted 12+ years, not 10.

An explanation of what’s being presented in Figure 4: The last data point in the graph is the linear trend (in deg C per decade) from January 2001 to February 2014. It is basically zero. That, of course, indicates global surface temperatures have not warmed during the most recent 158-month period. Working back in time, the data point immediately before the last one represents the linear trend for the 158-month period of December 2000 to January 2013, and the data point before it shows the trend in deg C per decade for November 2000 to December 2013, and so on.

The highest recent rate of warming based on its linear trend occurred during the 158-month period that ended about 2004, but warming trends have dropped drastically since then.  There was a similar drop in the 1940s, and as you’ll recall, global surface temperatures remained relatively flat from the mid-1940s to the mid-1970s.  Also note that the late-1970s was the last time there had been a 158-month period without global warming—before recently.

In his RMS article, Kevin Trenberth also conveniently overlooked the fact that the discussions about the warming halt are now for a time period of about 16 years, not 10 years—ever since David Rose’s DailyMail article titled “Global warming stopped 16 years ago, reveals Met Office report quietly released… and here is the chart to prove it”.  In my response to Trenberth’s article, I updated David Rose’s graph, noting that surface temperatures in April 2013 were basically the same as they were in June 1997.  We’ll use June 1997 as the start month for the running 16-year+ trends.  The period is now 201-months long. The following graph is similar to the one above, except that it’s presenting running trends for 201-month periods.

A NOTE ABOUT THE RUNNING-TREND GRAPHS

There is very little difference in the end point trends of 13+ year and 16+ year running trends if HADCRUT4 or NCDC or GISS data are used. The major difference in the graphs is with the HADCRUT4 data and it can be seen in a graph of the 13+ year trends.  I suspect this is caused by the updates to the HADSST3 data that have not been applied to the ERSST.v3b sea surface temperature data used by GISS and NCDC.

The GISS, HADCRUT4 and NCDC global surface temperature anomalies are compared in the next three time-series graphs. Figure 6 compares the three global surface temperature anomaly products starting in 1979. Again, due to the timing of this post, the HADCRUT4 data lags the GISS and NCDC products by a month.  The graph also includes the linear trends.  Because the three datasets share common source data, (GISS and NCDC also use the same sea surface temperature data) it should come as no surprise that they are so similar.  For those wanting a closer look at the more recent wiggles and trends, Figure 7 starts in 1998, which was the start year used by von Storch et al (2013) Can climate models explain the recent stagnation in global warming?  They, of course found that the CMIP3 (IPCC AR4) and CMIP5 (IPCC AR5) models could NOT explain the recent halt in warming.

Figure 8 starts in 2001 which was the year Kevin Trenberth chose for the start of the warming halt in his RMS article mentioned and linked earlier. Because the suppliers all use different base years for calculating anomalies, I’ve referenced them to a common 30-year period: 1981 to 2010.  Referring to their discussion under FAQ 9 here, according to NOAA:

Figure 9 presents the average of the GISS, HADCRUT and NCDC land plus sea surface temperature anomaly products. Again because the HADCRUT4 data lags one month in this update, the most current average only includes the GISS and NCDC products. 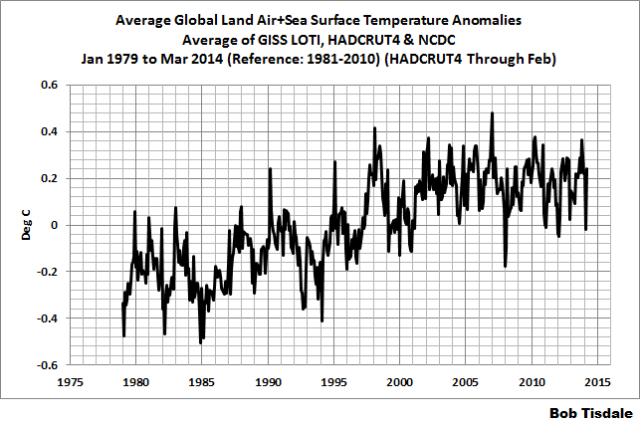 The most recent weekly data, presented in yesterday’s mid-April update, show that NINO3.4 sea surface temperature anomalies have not reached the threshold of an El Niño.