Fundamental Differences between the NOAA and UAH Global Temperature Updates

As you are well aware, there is a very basic difference between the updates to the NOAA and UAH global temperature datasets: the NOAA update increased the warming rate of their product during the slowdown in global surface warming, while the UAH update decreased the warming rate of their lower troposphere dataset in that timeframe. We’ll discuss another basic difference between those updates in this post.

Some people, Tamino (a.k.a. Grant Foster) for example, believe my discussions of the recent changes to the NOAA and UAH global temperature products show bias on my part. He says I use insulting language when discussing the NOAA changes but that I choose flattering words for the changes to the UAH data. Tamino closes his post with, speaking of me:

The obvious conclusion is that when revision goes the way he wants it’s “much corrected” and “enhanced” but when it goes the way he doesn’t want, it’s “unjustifiable” and “overcooked.”

Thanks, Tamino, for the opportunity to present once more why I have stated (and will continue to state in the future) that the new NOAA ERSST.v4-based data are unjustifiably overcooked.

The biggest changes to the NOAA NCEI (formerly NCDC) data took place in the sea surface temperature portion (the change from the ERSST.v3b to the ERSST.v4 datasets) of their combined land and ocean surface temperature dataset. See Karl et al. (2015) Possible artifacts of data biases in the recent global surface warming hiatus (paywalled). NOAA used the night marine air temperature dataset (HADNMAT2) from the UK Met office as a reference for their new ERSST.v4 dataset. But the short-term warming rate of the new NOAA ERSST.v4 data during the global warming slowdown is much higher than the HADNMAT2 data. See Figure 1, which was first presented in my open letter to Tom Karl. That graph serves as the basis for my statements (1) that the recent update to the NOAA sea surface temperature data cannot be justified by the dataset that was used a reference for those adjustments, and, in turn, (2) that the NOAA adjustments are overcooked. 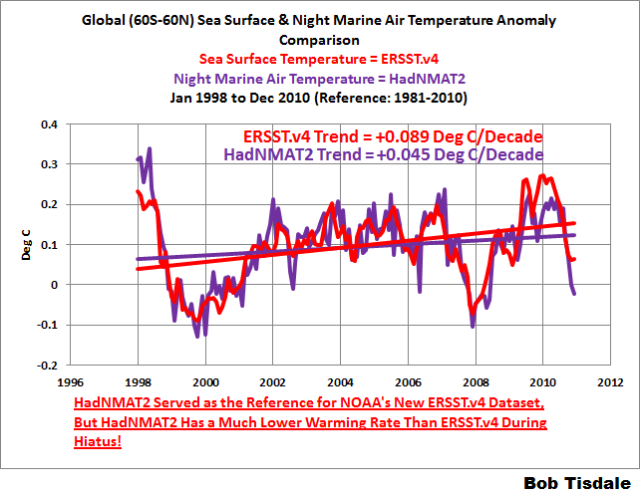 Bottom line for the NOAA adjustments: I can support with data my statements about the NOAA ERSST.v4 sea surface temperature-based global temperature products being unjustifiably overcooked.

WHAT ABOUT THE TREND-LOWERING CHANGES TO THE UAH LOWER TROPOSPHERE TEMPERATURE DATA?

The changes to the UAH lower troposphere temperature data brought their short-term trends down into line with the product from RSS. Simple. Nothing controversial. The short-term trends of the UAH data are NOT lower than the RSS data. In fact, the UAH lower troposphere temperature data show slightly less cooling (not more) than the RSS data. See Figures 2 and 3. 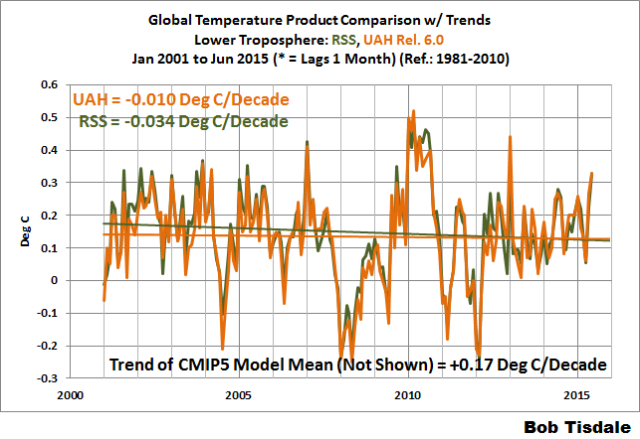 Bottom line for the UAH changes: unlike with the NOAA data, we can’t say the changes to the UAH data are unjustified because they are so similar to those of RSS, and, as a result, we also cannot say the UAH data are overcooked…or undercooked, depending on your point of view.

We discussed the unjustifiable and overcooked changes to the new NOAA sea surface temperature data in the posts:

And because GISS has recently switched to the new NOAA ERSST.v4 data, see:

The Three Faces of the GISS Land-Ocean Temperature Index (LOTI)

I discussed the update of the UAH lower troposphere temperature data in the post:

Refering to another topic in Tamino’s post, I wonder if Tamino would prefer the term “hiatus busting” instead of “pause busting”, considering that Karl et al (2015) used the term hiatus, not pause, in the title of their paper Possible artifacts of data biases in the recent global surface warming hiatus. Mmm, probably not, because Tamino uses the same misdirection as NOAA did in Karl et al.

Again, thanks, Tamino, for the opportunity to once again illustrate how NOAA unjustifiably overcooked their adjustments to their ERSST.v4-based data. It has always been a pleasure responding to you.   Welcome back.

Research interest: the long-term aftereffects of El Niño and La Nina events on global sea surface temperature and ocean heat content. Author of the ebook Who Turned on the Heat? and regular contributor at WattsUpWithThat.
View all posts by Bob Tisdale →
This entry was posted in Global Temperature Update, The Halt In Global Warming, The Pause. Bookmark the permalink.