This is a deviation from my typical presentation of a subdivided dataset. Usually, I divide the dataset in a way that is intended to illustrate how and why natural variables can explain the warming over the term of that data. In this post, I’ve broken it into subsections that allow the data to show behavior that cannot be explained by anthropogenic global warming, and I’m leaving it to the proponents of manmade global warming to explain, through their own data analyses of the five subsets, how those five subsets show continuous and continued warming, when clearly they do not.

Believe it or not, the NODC’s ocean heat content data for the depths of 0-700 meters contain a couple of hockey sticks—that is, no warming for 4 decades and then, presto, there’s warming. One of the datasets is relatively small, but the other is quite large, representing about 39% of the surface area of the global oceans.

The National Oceanographic Data Center (NODC) Ocean Heat Content data is only available to the public in an easy-to-use format through the KNMI Climate Explorer, where it is available only for the depths of 0-700 meters. The NODC recently released its new dataset for 0-2000 meters but it’s available only to the public in limited subsets and it is smoothed with a 5-year filter, which makes it useless in attribution studies. Regardless, this doesn’t stop proponents of anthropogenic global warming who repeatedly and nonsensically claim only greenhouse gases could have caused the warming and that the warming continues.

We know the NODC’s ocean heat content data for depths of 0-2000 meters are available on a monthly basis because the UKMO uses it in its EN3 ocean heat content dataset. The NODC and UKMO apparently do not want KNMI to provide the public easy-to-use access to UKMO EN3 data (in unadjusted form) because by KNMI removed it from their Climate Explorer only a day or two after my first post that included that data. Refer to the post here.

With that in mind, please don’t ask me why I did not use the NODC ocean heat content for 0-2000 meters in this post. That will save me the time of suggesting to you that you read the post instead of looking only at all the pretty pictures.

USING A GLOBAL DATASET TO REPRESENT GLOBAL WARMING IS MISLEADING

It sounds odd, but it’s true. By looking at a dataset on a global basis, one can only assume greenhouse gases play a role in the warming. As I’ve noted in numerous previous posts, dividing the dataset into smaller subsets allows the data to present how it truly warmed.

That is, global temperature (and related) metrics show evidence of global warming. These include sea surface temperature, lower troposphere temperature, combined land+sea surface temperature and ocean heat content for depths of 0-700 meters. See Figure 1 for the NODC global ocean heat content anomalies for depths of 0-700 meters. While each of those datasets show warming has occurred, for more than 3 ½ years, I have illustrated and discussed here and in cross posts at WattsUpWithThat how the warming over the last 3 decades can be attributable to natural factors, primarily strong, naturally occurring El Niño and La Niña events. I’ve also published an ebook in pdf form that explains the natural processes that cause the warming. It’s written for those with and without technical backgrounds. 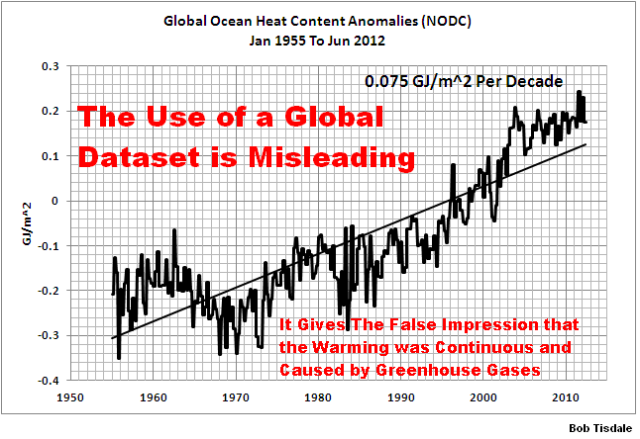 I’ve divided the global oceans into 5 subsets for this presentation. See Figure 2. As noted earlier, I’m taking a change of tack for this post. I’m presenting the data so that it shows how it contradicts the hypothesis (fancy word for guess) of manmade global warming. 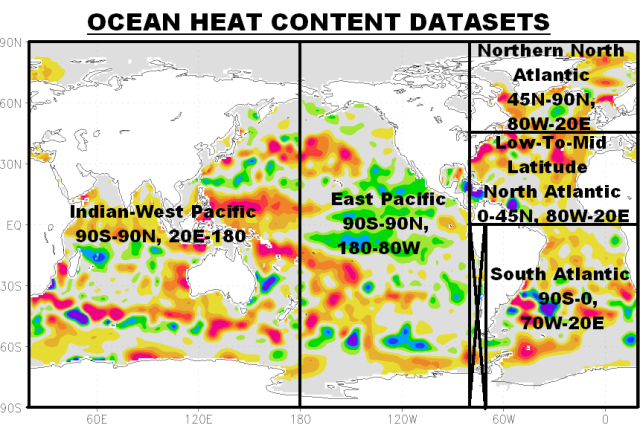 LOW-TO-MID LATITUDES OF THE NORTH ATLANTIC

The ocean heat content anomalies of the low-to-mid latitudes of the North Atlantic (0-45N, 80W-20E), Figure 3, would be ideal for proponents of anthropogenic global warming if it wasn’t for the fact that it stopped warming in the early 2000s. With its excessive trend (0.215 GJ/m^2 per decade) versus the global trend (0.075 GJ/m^2 per decade), this portion of the North Atlantic exhibits signs of the ocean heat content equivalent of the Atlantic Multidecadal Oscillation, but with this dataset, it has already started to cool. 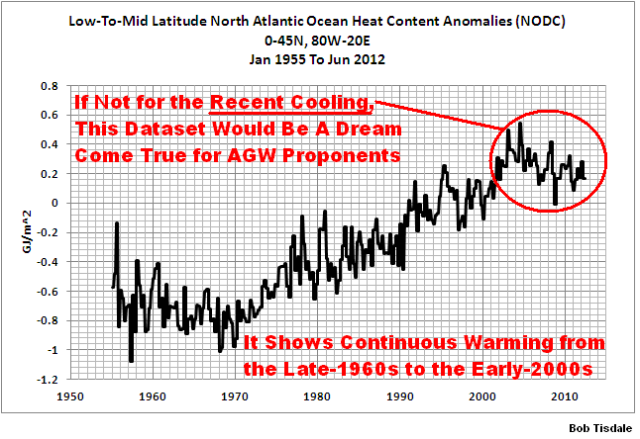 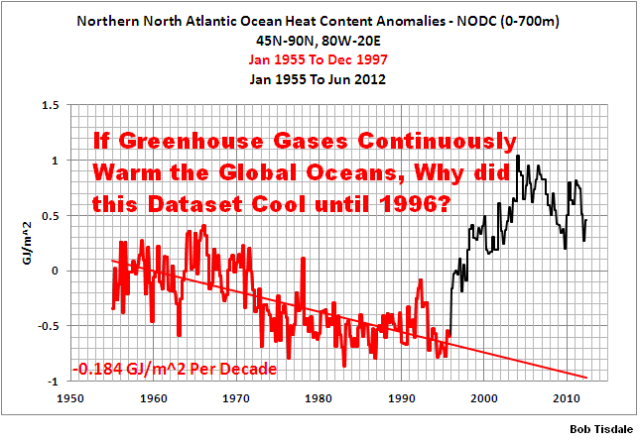 This subset definitely does not show “continuous warming”. 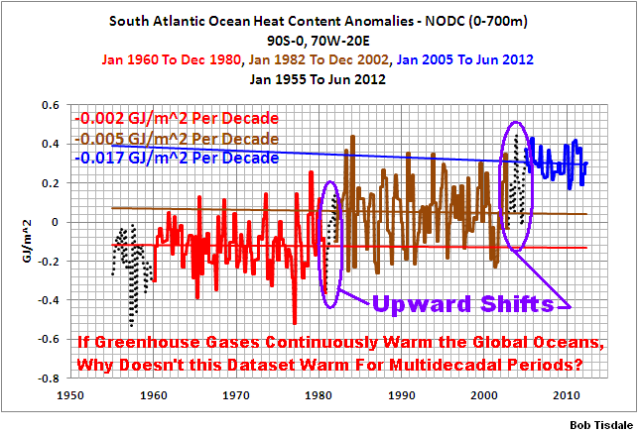 The South Atlantic does not pass the test for “continuous warming”. The same can be said for the next subset. 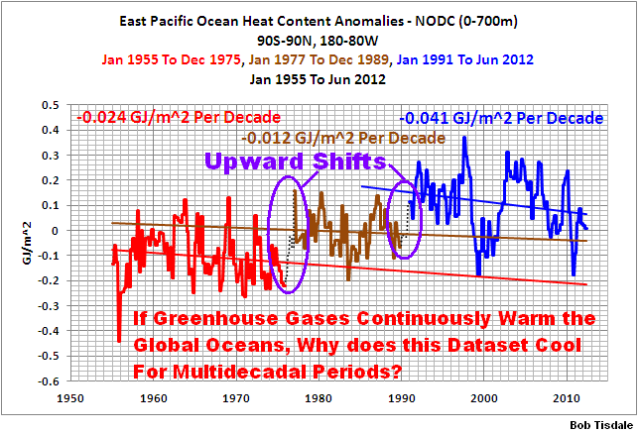 The Indian-West Pacific (90S-90N, 20E0180) is the largest of the subsets presented in this post. It represents about 39% of the surface area of the global oceans. Curiously, it is the only subset to exhibit warming in recent years. Note also how the ocean heat content anomalies for this region failed to warm from 1955 to 1997, even though greenhouse gas emissions were increasing over those 4 decades. If anything, they cooled slightly. Then in response to the 1998/99/00/01 La Niña, ocean heat content shifted upwards. That upward shift actually makes sense, though we might have expected to see other less-notable shifts in the past. What really looks awkward is the continued warming in response to the pair of double dip La Niña events that followed the moderate-to-strong El Niño events of 2006/07 and 2009/10. They weren’t super El Niño events by any stretch of the imagination, but they caused unusually strong ocean heat content rises according to the data. 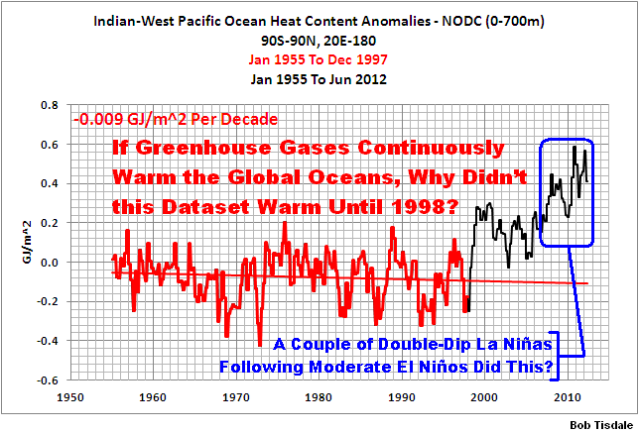 Regardless, the Indian-West Pacific dataset fails to provide the continuous warming one would expect from anthropogenic greenhouse gases.

If you’re a proponent of anthropogenic global warming and if you choose to present your data analyses, please do so using data available on a gridded basis in a reasonably easy-to-use format, from a source such as the KNMI Climate Explorer, as I always do in my blog posts so that anyone can verify results. What we’re not looking for are claims to the effect of, “oh, that’s caused by aerosols.” You’ll need to supply the data source to accompany your claim, to show cause and effect. If you’re a modeler and you’d like to discuss your models, please ask KNMI to add to their Climate Explorer the outputs of your ocean heat content simulations that exist in the CMIP3 and CMIP5 archives.

Please also explain, as part of your analyses, how anthropogenic forcings are responsible for the disparity in the trends, as shown in Figure 8. Don’t forget the data to accompany your claims. 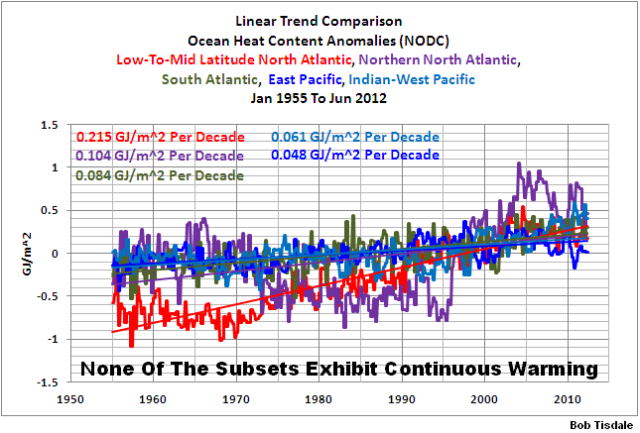 If you’re a regular visitor to SkepticalScience, please don’t waste your time and present the gif animation The Escalator.  That would clearly indicate you haven’t a clue what you’re talking about.

The data presented in this post is available through the KNMI Climate Explorer.

Research interest: the long-term aftereffects of El Niño and La Nina events on global sea surface temperature and ocean heat content. Author of the ebook Who Turned on the Heat? and regular contributor at WattsUpWithThat.
View all posts by Bob Tisdale →
This entry was posted in CAGW Proponent Arguments, Ocean Heat Content Problems. Bookmark the permalink.