[Update:  Corrected a few typos in the paragraph before Figure 4. My thanks to rogerknights.]

I hadn’t read the NOAA State of the Climate (SOTC) Report for 2014 when I prepared the post Does the Uptick in Global Surface Temperatures in 2014 Help the Growing Difference between Climate Models and Reality?  (WattsUpWithThat cross post is here.) I simply presented data and climate model outputs in that post.

The following are a few observations about the annual NOAA report. NOAA biased their report by omitting key discussions.  First an introduction.

THE 2014 GLOBAL HIGHLIGHTS OF THE NOAA SOTC REPORT

With respect to surface temperatures, the Global Highlights of the NOAA State of the Climate report reads (my boldface):

Of course, the global highlights are what the mainstream media and alarmist blogs parrot. Some may even report on the Global Temperatures and Regional Temperatures portions of the NOAA report.  Few will venture beyond that.

Still farther down on the webpage we come across the links to NOAA’s Supplemental Information.

The first link brings us to the Calculating the Probability of Rankings for 2014 webpage.  There, after an initial discussion, they write (my boldface):

Using a Monte Carlo approach (Arguez et al, 2013), NCDC considered the known uncertainty of the global land and ocean annual temperature in the 2014 annual ranking. Taking into account the uncertainty and assuming all years (1880-2014) in the time series are independent, the chance of 2014 being

NCDC follows these conventions to categorize the confidence associated with assertions made with respect to ranks used in the report:

My Figure 2 is the “conventions to categorize” table that follows that discussion, with my highlight:

So, according to NOAA, the chance that 2014 was the warmest on record was 48.0% and based on their table, the global surface temperature anomalies in 2014 appear in the range of “more unlikely than likely”.

Therefore, NOAA has biased the “Global Highlights” of their State of the Climate report by failing to note the likelihood, actually unlikelihood, that 2014 had the highest global surface temperatures on record.

Under the heading of Global Temperatures on the main page of the NOAA SOTC report, they state:

This is the first time since 1990 the high temperature record was broken in the absence of El Niño conditions at any time during the year in the central and eastern equatorial Pacific Ocean, as indicated by NOAA’s CPC Oceanic Niño Index. This phenomenon generally tends to increase global temperatures around the globe, yet conditions remained neutral in this region during the entire year and the globe reached record warmth despite this.

NOAA’s Oceanic NINO Index is based on the NINO3.4 region (5S-5N, 170W-120W) of the equatorial Pacific. See the NOAA map of the NINO regions here. And according to a Hovmoller diagram of the sea surface temperature anomalies from the NOAA GODAS website, Figure 3, El Niño conditions (sea surface temperature anomalies equal to or greater than +0.5 deg C) existed along the equatorial Pacific east and west of the NINO3.4 region for most of 2014.

In other words, the sea surface temperature data indicate El Niño conditions existed for most of the year, but not in the region that NOAA uses to define an El Niño. Further to this, as we discussed in the most recent ENSO update and in the post The Little El Niño That Didn’t or Might Have (Depends on the Agency and Index), the Japan Meteorological Agency (JMA) notes that El Niño conditions have existed since June.

Therefore, NOAA has omitted the fact that data indicate El Niño conditions existed along the equatorial Pacific, outside of the region they use as an ENSO index, so they could claim ENSO “conditions remained neutral in this region during the entire year and the globe reached record warmth despite this.”

Of course, the intent of that NOAA statement was to give the impression that there was a general overall warming that could not be attributed to El Niño conditions, when, in fact, El Niño conditions did exist in 2014.

This is a discussion of the additional cause of the elevated sea surface temperatures.

NOAA notes in their “Global Highlights” (my boldface):

Much of the record warmth for the globe can be attributed to record warmth in the global oceans. The annually-averaged temperature for ocean surfaces around the world was 0.57°C (1.03°F) higher than the 20th century average, easily breaking the previous records of 1998 and 2003 by 0.05°C (0.09°F). The first four months (January–April) each ranked among their seven warmest for their respective months and the following seven consecutive months (May–November) were record warm. The year ended with December third warmest on record for the month.

In 2014, the warmth was due to large regions of record warm and much warmer-than-average temperatures in parts of every major ocean basin. Record warmth for the year was particularly notable in the northeastern Pacific Ocean in and around the Gulf of Alaska, much of the western equatorial Pacific, parts of the western North Atlantic and western South Atlantic, and much of the Norwegian and Barents Seas. Nearly the entire Indian Ocean was much warmer than average with a broad swath between Madagascar and Australia record warm. Part of the Atlantic Ocean south of Greenland and the Southern Ocean waters off the southern tip of South America were much cooler than average, with one localized area near Antarctica record cold.

We have discussed in numerous posts the reasons for the elevated sea surface temperatures in the eastern extratropical North Pacific this year. See:

As an exercise, if we start our analysis in 2012 and work our way back in time, for how long of a time period did the sea surfaces of the North Pacific show no warming?  The answer, using NOAA’s ERSST.v3b data, is 23 years, yet the climate models used by the IPCC indicate they should have warmed about 0.5 deg C in that time. 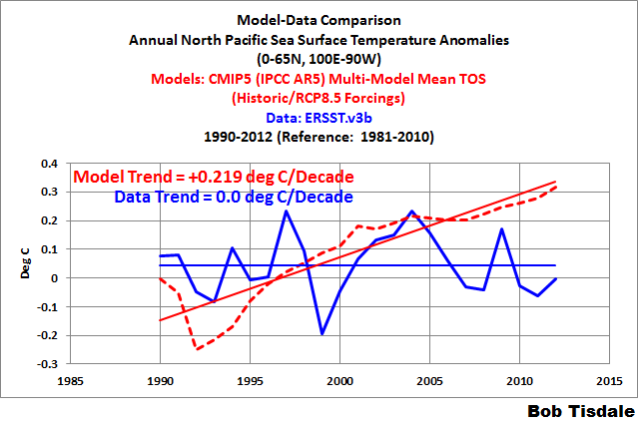 NOTE: If you were to click on the link to the first post, you’d note that using NOAA’s satellite-enhanced sea surface temperature dataset we can extend that period to 24 years. [End note.]

It’s unrealistic to assume the warming of the surfaces of the North Pacific in 2013 and 2014 were caused by manmade greenhouse gases, when they hadn’t warmed in at least 23 years before then.

According to NOAA definitions, global surface temperatures for 2014 were “More Unlikely Than Likely” the highest on record, but they failed to note that on the main page of their State of the Climate report.  NOAA used a specific ENSO index to claim that El Niño conditions did not exist in 2014, when at least one other index says El Niño conditions existed. And NOAA failed to discuss the actual causes of the elevated global sea surface temperatures in 2014, while making it appear that there was a general warming of the surfaces of the global oceans.

NOAA never stated specifically that 2014’s record high surface temperatures were a result of human-induced global warming, but they implied it…thus all the hoopla.  NOAA has omitted key discussions within that report, which biases it toward human-induced global warming.  In other words, the NOAA State of the Climate report was misleading.  NOAA has once again shown it is a political entity, not a scientific one.  And that’s a damn shame.  The public needs openness from NOAA about climate; we do not need to be misled by politically motivated misdirection and misinformation.

Research interest: the long-term aftereffects of El Niño and La Nina events on global sea surface temperature and ocean heat content. Author of the ebook Who Turned on the Heat? and regular contributor at WattsUpWithThat.
View all posts by Bob Tisdale →
This entry was posted in Alarmism, NOAA SOTC. Bookmark the permalink.