Did ENSO and the “Monster” Kelvin Wave Contribute to the Record High Global Sea Surface Temperatures in 2014?

Of course they did.

Those who have followed the 2014/15 El Niño series from its start back in April will recall all the hoopla about the strong downwelling Kelvin wave that was traveling from west to east along the Cromwell Current (aka the Pacific Equatorial Undercurrent).  Based on the size of that Kelvin wave, alarmists were anticipating a super El Niño that would cause record-high global surface temperatures, but the super El Niño failed to form.

But did the warm water released by that Kelvin wave have a noticeable impact on global sea surface temperatures?

Record-high global sea surface temperatures have occurred in 2014, and annually 2014 is likely to set a new record high.  We also know the primary cause:  the unusual weather-related surface warming of the eastern extratropical North Pacific.  That unusual warming event, also known as “the blob”, was discussed in a number of posts this year, including:

For 24 years, from 1989 to 2012, the surface of the North Pacific showed no warming, but climate models showed the surface there should have warmed more than 0.5 deg C in that time.  See Figure 1. 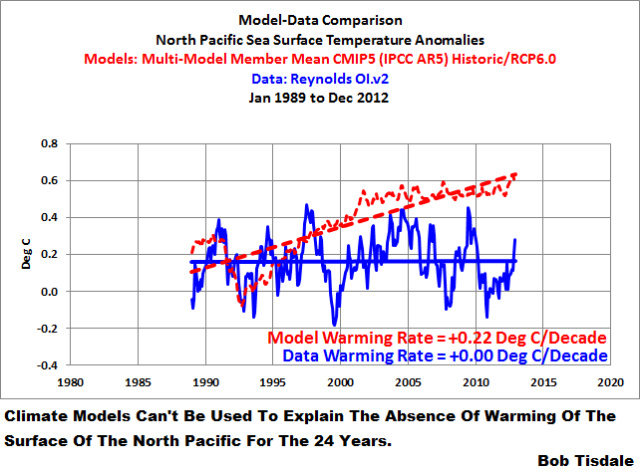 If the manmade greenhouse gas-forced climate models used by the IPCC cannot explain the 24-year absence of warming of the surface in the North Pacific, it can’t be claimed that the weather-related warming there in 2013 and 2014 were caused by manmade greenhouse gases.   That little bit of common sense eludes alarmists.

BACK TO THE “MONSTER” KELVIN WAVE

As we discussed in the first post in this series, the strong Kelvin wave that formed and traveled from west to east along the equator in the Pacific was caused by a couple of very strong westerly wind bursts.  Think of the downwelling (warm) Kelvin wave as a humongous pulse of warm water traveling from west to east, below the surface, being carried eastward by the Cromwell Current.  The water in the western equatorial Pacific is naturally warmer than it is in the east, so the pulse of warm water can create greater positive subsurface temperature anomalies as it travels east.  See Animation 1, which is an animation of the pentadal (5-day average) subsurface temperature anomaly cross sections available from the NOAA GODAS website. It runs from the first of the year to the end of July 2014.

The complete animation to the end of November is here.

That first downwelling Kelvin wave this year was very strong, the strongest one since 1997, and of course the Kelvin wave(s) in 1997 initiated the 1997/98 super El Niño.

We’ve discussed other reasons why this El Niño failed to turn into a super El Niño.

We discussed another unusual event this year…how part of the original Kelvin wave broke out of the Cromwell Current just east of the dateline.  See the posts here and here. That warm water was carried back (south of the equator) to the west where it reentered the Cromwell Current and is now being carried eastward, providing the fuel for the late evolution of the weak-to-moderate El Niño conditions we have now.

That’s very true.  While some of the warm water that was part of the first downwelling Kelvin wave this year broke away and is now being recirculated along the equator, the rest of that the warm water from that Kelvin wave didn’t simply disappear. And the upwelling (cool) Kelvin wave that followed it wasn’t strong enough to counter it fully. So the warm water has to be somewhere, and the likely place is the surface of the tropical Pacific.

Because that warm water didn’t really make its presence known in the NINO3.4 region until recently (in response to the second and third downwelling Kelvin waves), the impacts of the strong Kelvin wave earlier this year will not register on the “official” El Niño records. But that doesn’t mean that warm water didn’t rise to the surface of the tropical Pacific and influence surface temperatures there.   Figure 4 presents a map of the average sea surface temperature anomalies of the tropical and North Pacific for the past 6 months: May through October 2014.  I’ve highlighted (1) the NINO3.4 region (5S-5N, 170W-120W), upon which NOAA’s “official” ENSO index ONI is based; (2) the tropical Pacific (24S-24N, 120E-80W), which is also directly impacted by El Niño and La Niña events; and (3) the extratropical North Pacific (24N-65N, 120E-80W), where the blob existed in 2013 and 2014.

You’ll note the coordinates carry over into the Caribbean Sea, the Gulf of Mexico and Hudson Bay.  Those small portions outside the Pacific have little impact on this simple analysis.

We can confirm that El Niño conditions have hardly existed (in monthly data) in the NINO3.4 region by looking at the sea surface temperature anomalies there, Figure 5.  They’ve reached the threshold a couple of times (and they will be higher in November). 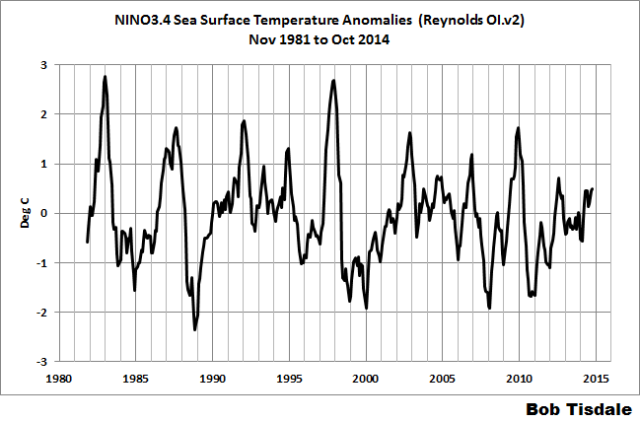 If we look at the sea surface temperature anomaly data for the entire tropical Pacific, however, Figure 6, we would think an El Niño had been taking place for a good part of 2014.  Sea surface temperature anomalies across the entire tropical Pacific this year are warmer than the peaks for period of 2002 to 2007 when 3 El Niño events occurred. See the ONI index to confirm that 3 El Niños occurred then. 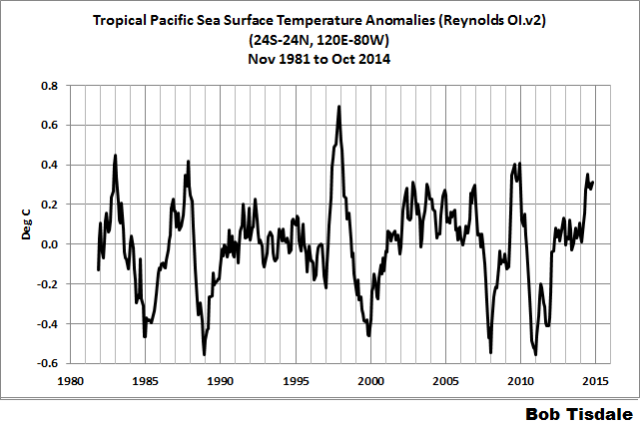 NOTE:  In the post Axel Timmermann and Kevin Trenberth Highlight the Importance of Natural Variability in Global Warming…, we discussed coastally trapped Kelvin waves.  It was topic introduced by Kevin Trenberth in the interview that was discussed in that post. As we noted in that post, while coastally trapped Kelvin waves do exist, it was difficult to see any evidence of them in the sea surface temperature records this year.  That doesn’t mean they didn’t occur; they’re just difficult to see. [End note.]

DID THE ENSO-RELATED SURFACE WARMING OF THE TROPICAL PACIFIC HAVE A NOTICEABLE IMPACT ON GLOBAL SEA SURFACE TEMPERATURES THIS YEAR?

A simple way to determine the impact of the surface warming in the tropical Pacific this year is to remove the sea surface temperature data of both the tropical Pacific and the extratropical North Pacific from the global data. We can then add the data for those regions back in and check the results. 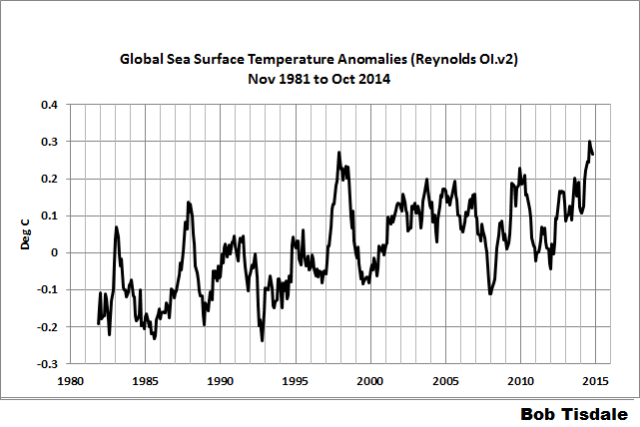 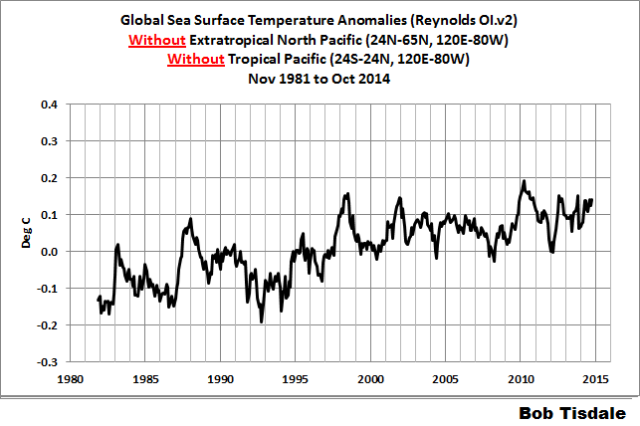 NOTE: We’ve discussed how Kevin Trenberth now suggests that El Niño events can cause the long-term warming of global surface temperatures.  The most recent post was The 2014/15 El Niño – Part 9 – Kevin Trenberth is Looking Forward to Another “Big Jump”.  And there are other related posts linked to it.  The El Niño-caused upward shifts were evident in Figure 8, so I’ve highlighted them in Figure 9. 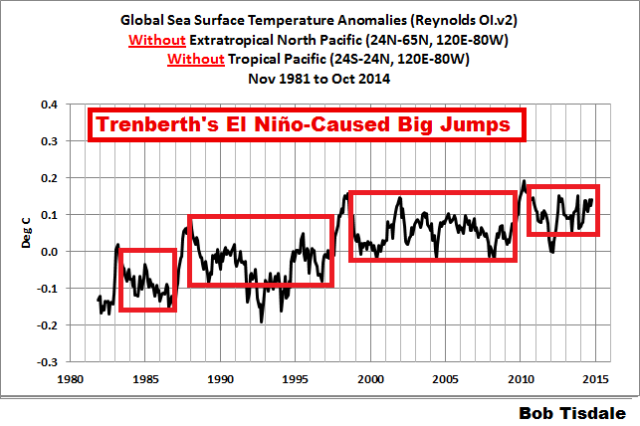 Back to our discussion of the impact of the warming of the tropical Pacific in 2014:

In Figure 8 above, we can see that global sea surface temperatures would not be at record high levels without the impacts of the extratropical North Pacific and the tropical Pacific.

Let’s add the data for the tropical Pacific back in, but exclude the extratropical North Pacific.  See Figure 10.  In that case, they’d be warmer, closer to record highs, but not at record highs. 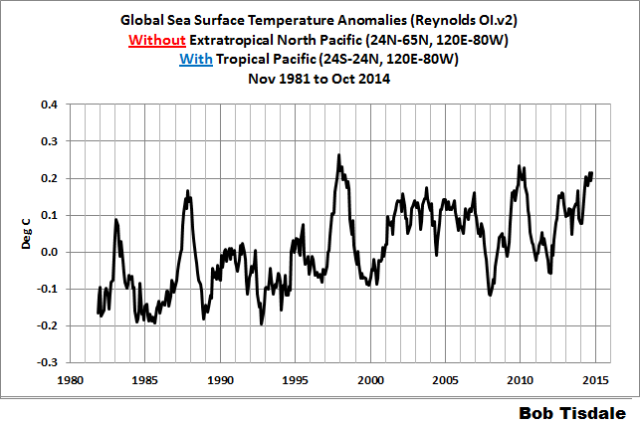 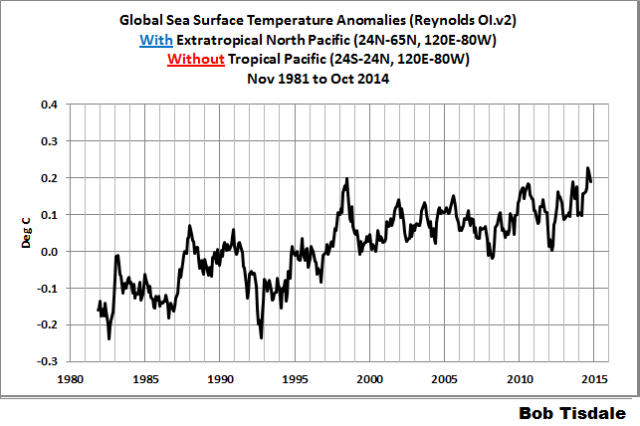 So we’ve been correct to say that the unusual weather-related warming event in the extratropical North Pacific is responsible for the record-high sea surface temperatures in 2014.

And for those of you who want to argue about the warm water for the Kelvin wave, also see the post The 2014/15 El Niño – Part 2 – The Alarmist Misinformation (BS) Begins.

Research interest: the long-term aftereffects of El Niño and La Nina events on global sea surface temperature and ocean heat content. Author of the ebook Who Turned on the Heat? and regular contributor at WattsUpWithThat.
View all posts by Bob Tisdale →
This entry was posted in 2014-15 El Nino Series, El Nino-La Nina Processes, The Blob. Bookmark the permalink.

29 Responses to Did ENSO and the “Monster” Kelvin Wave Contribute to the Record High Global Sea Surface Temperatures in 2014?