This post provides an update on the progress of the evolution of the 2014/15 El Niño with data through the beginning of August 2014. The post is similar in layout to the May, the June and the July updates.  The post includes 3 gif animations and 13 illustrations so the post might take a few moments to load on your browser.  Please click on the illustrations and animations to enlarge them.

We compared the evolution of the 2014/15 El Niño to the 1982/83 and 1997/98 El Niños in a number of posts in this series, back when this El Niño was being compared to those two strong events. We don’t see those comparisons as often, but people may still expect to see the comparisons in my posts, so I’ve updated those graphs.  And since we’ve been watching the downwelling (warm) Kelvin wave as it makes its way east along the equator in the Pacific, also included in this post are evolution comparisons using warm water volume anomalies and depth-averaged temperature anomalies from the NOAA TAO project website.

Then, we’ll take a look at a number of Hovmoller diagrams comparing the progress so far this year to what happened in 1982. We had been using 1997 as a reference, but we’re well past this year’s event coming anywhere close to the one in 1997, so I’ve switched to 1982, which was a late bloomer.

Figure 1 includes the weekly sea surface temperature anomalies of the 4 most-often-used NINO regions of the equatorial Pacific. From west to east they include:

Using weekly sea surface temperature anomalies for two NINO regions, Figure 2 updates the comparisons of the evolutions of this El Niño with the 1982/83 and 1997/98 events.  The NINO3.4 and NINO1+2 comparisons were originally provided in the post Part 3 – Early Evolution – Comparison with 1982/83 & 1997/98 El Niño Events.   As a further reference, I’ve also included the evolutions of the two other years during which sea surface temperatures in the equatorial Pacific rose into El Niño conditions early in the year (1993 and 2012), but then failed to remain there and become an “official” El Niño. The evolutions in 1993 and 2012 were first presented in Part 11 – Is the El Niño Dying? 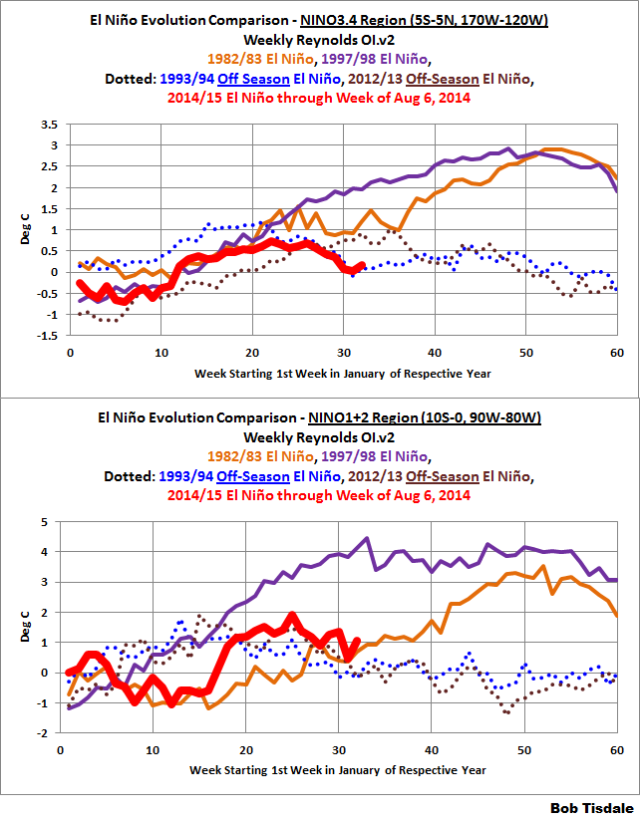 The weekly Reynolds OI.v2 data for Figures 1 and 2 are available through the NOAA NOMADS webpage here.

In the first post in this series, we discussed a number of animations of maps and animations of equatorial cross sections available from the NOAA Global Ocean Data Assimilation System (GODAS) website.  Each cell of the animation is a 5-day (pentadal) average. Those animations ran from January 3rd to March 29th. The following are updates, again starting in January 3rd.  GODAS only maintains their animations for 3 months.  I’ve stored the maps since the first of the year and will continue to add maps as time progresses.  That way we can watch the El Niño unfold from the beginning and then try to keep track of the warm water when El Niño is over.

Animation 1 provides the sea surface height anomalies and the depth-averaged temperature anomalies for the top 300 meters (T300) side by side. Again, please click on the animations to enlarge them.

Animation 3 is an update of the cross sections of temperature anomalies at depth along the equator.

The new warm anomaly in the western equatorial Pacific is highlighted in Figure 3. It has strengthened in the past few weeks.  If the anomaly works its way eastward with the Equatorial Undercurrent in the Pacific (the Cromwell current), as it should, then the anomaly will increase as it works its way to the east, because the subsurface waters in the east are normally cooler than they are in the west.  And if more of the warm water that’s off the equator (just south of the equator in the western tropical Pacific as highlighted in Figure 4) is drawn into the equatorial undercurrent, there would be more subsurface warm water to help fuel an El Niño later this year.  Yup, lots of ifs and shoulds and woulds in that.

The NOAA Tropical Atmosphere-Ocean (TAO) Project website includes data for two temperature-related datasets for the equatorial Pacific.  See their Upper Ocean Heat Content and ENSO webpage for descriptions of the datasets.   The two datasets are Warm Water Volume (above the 20 deg C isotherm) and the Depth-Averaged Temperatures for the top 300 meters (aka T300).  Both are available for the:

Keep in mind that the longitudes of 120E-80W stretch 160 deg, almost halfway around the globe. For a reminder of width of the equatorial Pacific, see the protractor-based illustration here.

In the following three graphs, we’re comparing data for the evolution of the 2014/15 El Niño so far (through month-to-date August 2014) with the data for the evolutions of the 1982/83 and 1997/98 El Niños. The Warm Water Volume data are the top graphs and the depth-averaged temperature data are the bottom graphs.  As you’ll see, the curves of two datasets are similar.

Let’s start with the Western Equatorial Pacific (5S-5N, 120E-155W), Figure 5. The warm water volume and depth-averaged temperature data show the Western Equatorial Pacific had slightly less warm water or was slightly cooler this year than during the opening months of 1997. But 2014 had more warm water or was warmer than 1982.  The warm water volume and temperature to depth in the west dropped as the Kelvin wave carried some water east, but it has since rebounded. 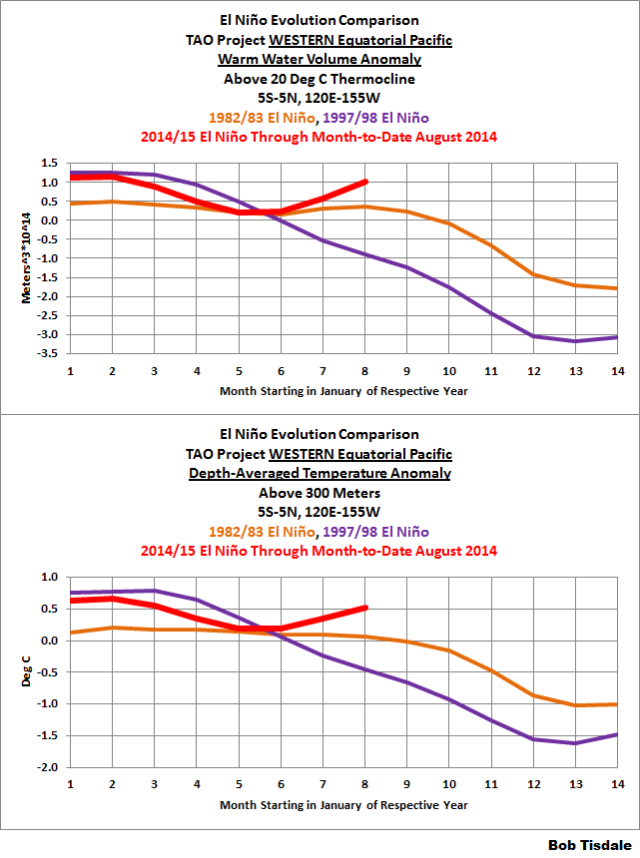 In the second post in this series, we showed that the ocean heat content for the entire eastern tropical Pacific (24S-24N, 180-80W), for the depths of 0-700 meters, was cooler before the start of the current El Niño than it was in before the start of 1997 El Niño. (See the graph here.)

Returning to the TAO Project data, the warm water volume and depth-averaged temperature data shown in Figure 6 for the eastern equatorial Pacific also show lower values in 2014 than in 1997.  This year, the eastern equatorial data both rose, a result of the Kelvin wave carrying warm water from the West Pacific Warm Pool to the east.  Most of that warm water in the east has now been consumed, released to the atmosphere through evaporation or distributed away from the equator. 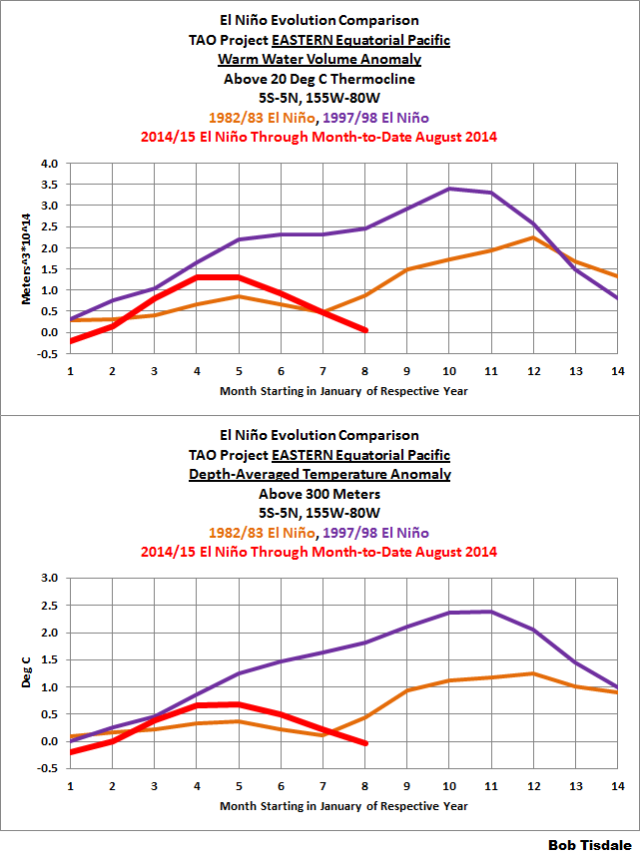 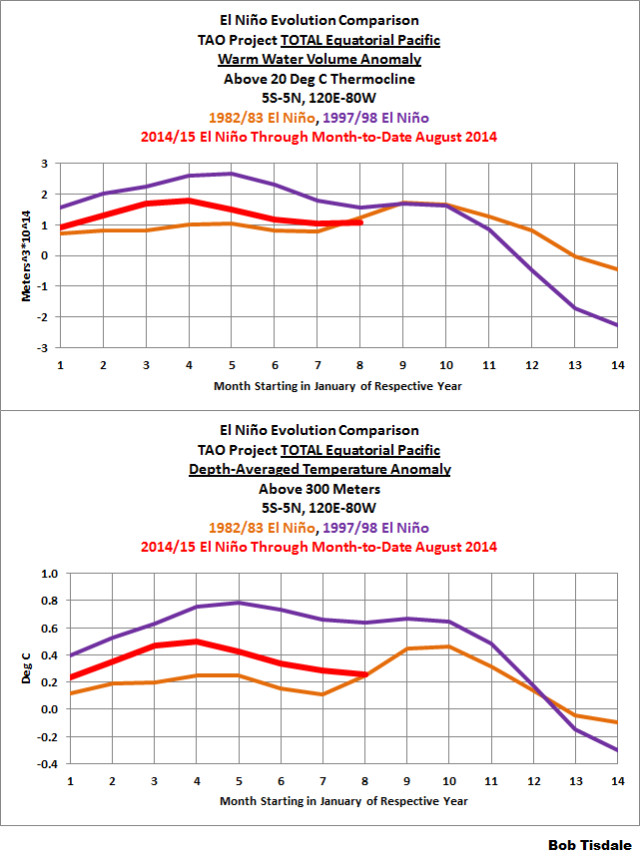 We’re still waiting for update of the NODC ocean heat content data.  It will be interesting to see what effect this off-season El Niño has had on the ocean heat content of the tropical Pacific.  Did it drop as a result of this off-season El Niño? We’ll have to wait for their April-June 2014 update, which should be available in August or September.

The reasons an El Niño did not continue to form this year in response to the Kelvin wave are well established. First, the atmospheric component of ENSO, the “SO” part, refused to cooperate.  That is, the trade winds in the western equatorial Pacific did not weaken as expected to help reinforce the El Niño development. (The other reason, of course, was the upwelling (cool) Kelvin that formed in the wake of the downwelling (warm) Kelvin wave, the latter of which had everyone so excited earlier this year.  That trailing cool Kelvin wave has now helped to counteract the warm Kelvin wave.) 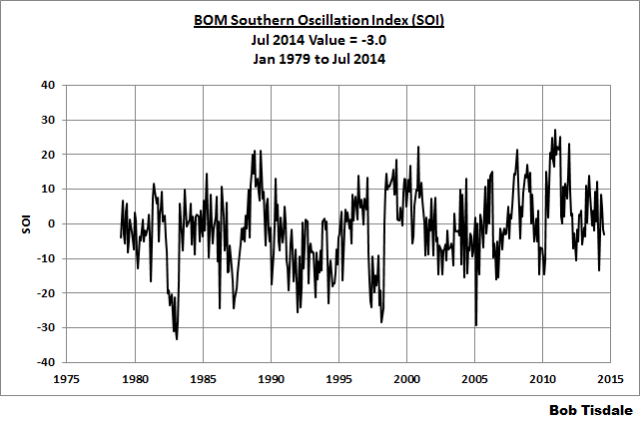 The top graph in Figure 9 compares the evolution of the SOI values this year to those in 1982 and 1997, the development years of the strong 1982/83 and 1997/98 El Niños.  The Southern Oscillation Index this year is lagging well behind the values in 1982 and 1997. Because the SOI data is so volatile, I’ve smoothed them with a 3-month filter in the bottom graph. 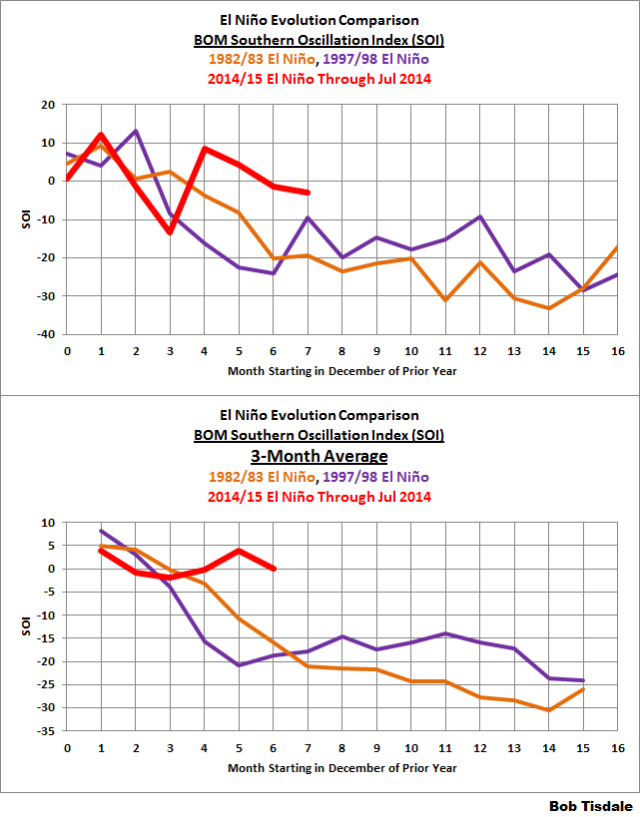 COMPARISONS OF HOVMOLLER DIAGRAMS OF THIS YEAR (TO DATE) WITH 1982

In past updates, in the following Hovmoller diagrams, I’ve used the development of the 1997/98 El Niño as a reference for this year’s El Niño. That now seems to be overkill, because the feedbacks never kicked in this year…where all of the feedbacks freakishly aligned for the 1997/98 El Niño.  The 1982/83 El Niño was a late bloomer; that is, it didn’t really start to take off until later in the year, and it was a very strong El Niño too. So I’ve switched reference years for this post.

Hovmoller diagrams are a great way to display data.  If they’re new to you, there’s no reason to be intimidated by them. Let’s take a look at Figure 10.  It presents the Hovmoller diagrams of thermocline depth anomalies (the depth of the isotherm at 20 deg C) with 2014 on the left and 1982 on the right. GODAS, unfortunately, furnishes the illustrations (not the data) in different dimensions for the two years.  The vertical (y) axis in both is time with the Januarys for both years at the top and Decembers at the bottom.  The horizontal (x) axis is longitude, so, moving from left to right, we’re going from west to east…with the Indian Ocean in the left-hand portion, the Pacific in the center and the Atlantic in the right-hand portion.  We’re interested in the Pacific. The data are color-coded according to the scales below the Hovmollers.

Figure 10 is presenting the depth of the 20 deg C isotherm along a band from 2S to 2N. The positive anomalies, working their way eastward since the beginning of 2014, were caused by the downwelling Kelvin wave, which pushes down on the thermocline (the 20 deg C isotherm).  You’ll note how the anomalies grew in strength as the Kelvin wave migrated east. That does not mean the Kelvin wave is getting stronger as it traveled east; that simply indicates that the thermocline is normally closer to the surface in the eastern equatorial Pacific than it is in the western portion.

Figure 11 presents the 2014-to-date and 1982 Hovmollers for wind stress (not anomalies) along the equator.   The simplest way to explain them is that they’re presenting the impacts of the strengths and directions of the trade winds on the surfaces of the equatorial oceans. In this presentation, the effects of the east to west trade winds at various strengths are shown in blues, and the reversals of the trade winds into westerlies are shown in yellows, oranges and reds.

I’m in the process of preparing a post about the apparent 2013 climate shift in the Pacific and its impacts on global sea surface temperatures.

EARLIER POSTS IN THIS SERIES

And for additional introductory discussions of El Niño processes see:

My ebook Who Turned on the Heat? goes into a tremendous amount of detail to explain El Niño and La Niña processes and the long-term aftereffects of strong El Niño events.  Who Turned on the Heat? weighs in at a whopping 550+ pages, about 110,000+ words. It contains somewhere in the neighborhood of 380 color illustrations. In pdf form, it’s about 23MB. It includes links to more than a dozen animations, which allow the reader to view ENSO processes and the interactions between variables.

I’ve lowered the price of Who Turned on the Heat? from U.S.$8.00 to U.S.$5.00.  A free preview in pdf format is here.  The preview includes the Table of Contents, the Introduction, the first half of section 1 (which was provided complete in the post here), a discussion of the cover, and the Closing. Take a run through the Table of Contents.  It is a very-detailed and well-illustrated book—using data from the real world, not models of a virtual world. Who Turned on the Heat? is only available in pdf format…and will only be available in that format.  Click here to purchase a copy.  Thanks. (I also am very happy to receive tips or donations.)

Research interest: the long-term aftereffects of El Niño and La Nina events on global sea surface temperature and ocean heat content. Author of the ebook Who Turned on the Heat? and regular contributor at WattsUpWithThat.
View all posts by Bob Tisdale →
This entry was posted in 2014-15 El Nino Series, El Nino-La Nina Processes, ENSO Update. Bookmark the permalink.