THE BLOB Seems to Be Disappearing at the Surface – But Will It Reemerge?

Sad to say, I suspect it may reemerge at the surface…maybe not as strong as in the past, but I don’t think it’s going to disappear completely in 2016.  I hope my suspicions are wrong, though.

NOTE:  This post includes two gif animations so it may take a while to load on your browser.

WHAT CAUSED THE BLOB? (BOILERPLATE)

Let’s examine the animation of sea surface temperature anomalies for the North Pacific, starting in 2007. Animation 1 is an update and expansion of the animation here from the post North Pacific Update: The Blob’s Strengthening Suggests It’s Not Ready to Depart.  (My thanks to blogger Bill Illis for suggesting I extend the animation back in time.)

Animations of maps of monthly and weekly sea surface temperature anomalies can be very volatile, with weather effects and seasonal components creating a lot of visual noise.  To minimize the monthly volatility and seasonal components, each of the maps in Animation 1 presents the average sea surface temperature anomalies for a full year.  The annual maps then advance on a monthly basis. That is, the first map covers the 12-month period of January 2007 to December 2007.  The second map is for February 2007 to January 2008.  The third map: March 2007 to February 2008.  And so on through the last map for January 2015 to December 2015. This is similar to smoothing time-series data with a 12-month running-mean filter. I’ve paused the animation and added notes of the timing of El Niño and La Niña events.

When did it that warm pocket of water couple with the ridge of high pressure ? Dunno.

We can also see another Blob-like pocket of warm surface waters forming during what used to be called the 2008/09 La Niña…before NOAA switched to the ERSST.v4 “pause-buster” sea surface temperature data. Maybe a prerequisite for The Blob is a double-dip La Niña…but with a moderately strong El Niño preceding it.

THE BLOB APPEARS TO BE DISAPPEARING AT THE SURFACE

Let’s look at another animation.  We can see The Blob in the eastern extratropical North Pacific appearing to be dissipate in recent months.

We can see that the focus of The Blob shifts location and that it seems to strengthen and weaken over 2015…and that it appears to be dissipating/disappearing in recent weeks.

WHY WOULD THE BLOB REEMERGE AT THE SURFACE?

Mother Nature has once again shown that she can cause ocean heat uptake to depth.  That is, The Blob, a naturally occurring event, created a lot of warm water to depth in that location.  We can still see evidence of this in the most recent NOAA GODAS depth-averaged temperature reanalysis for the depths of 300 meters (a.k.a. T300 anomalies).  See Figure 1. (Map available here.)

An even better illustration:  Figure 2 is page 25 from the NOAA/GODAS Monthly Ocean Briefing. It includes two Hovmoller diagrams in the upper left-hand side that show the temperature anomalies to depths of 300 meters: one from 1979 to present and the other for the past 4 years. The temperature scale is difficult to read, but I believe the numbers range from -1.8 deg C to +1.8 deg C. 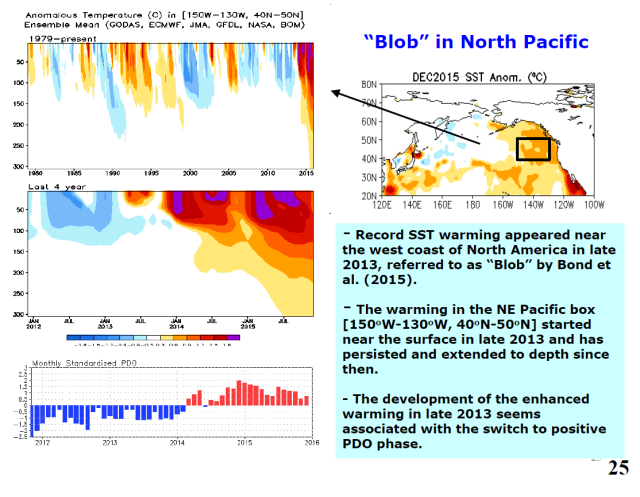 Even though surface temperatures in The Blob region have dropped in recent months, there is still a chunk of warm water below the surface…and it should eventually reemerge at the surface.

The third note on page 25 from the GODAS Monthly Ocean Briefing reads:

The development of the enhanced warming in late 2013 seems associated with the switch to positive PDO phase.

A COUPLE OF TIME-SERIES GRAPHS

I have switched to the coordinates used in the NOAA/GODAS Monthly Ocean Briefing for The Blob, which are 40N-50N, 150W-130W.   I had been using a larger region: 35N-55N, 150W-125W.   The sea surface temperature anomalies of NOAA’s smaller region are a little more volatile than my former region.  See Figure 3. 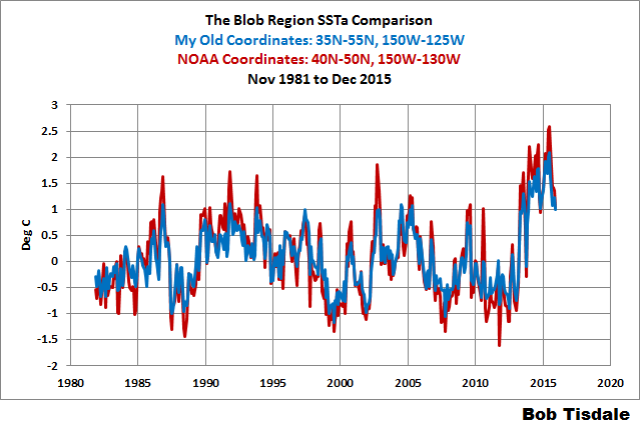 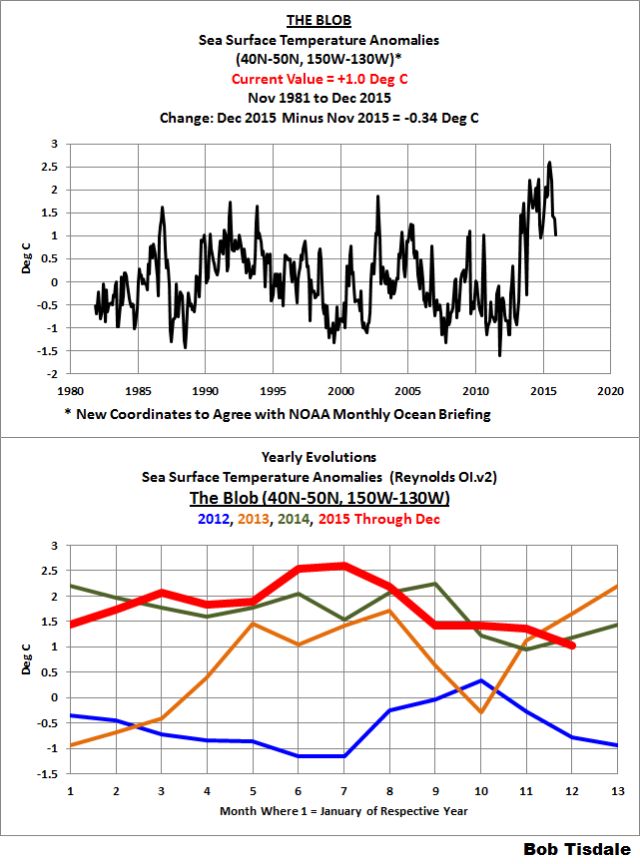 MODEL FORECASTS FOR THE BLOB

Figure 5 is page 38 from the latest NOAA/GODAS Monthly Ocean Briefing (with my highlight) for your info. 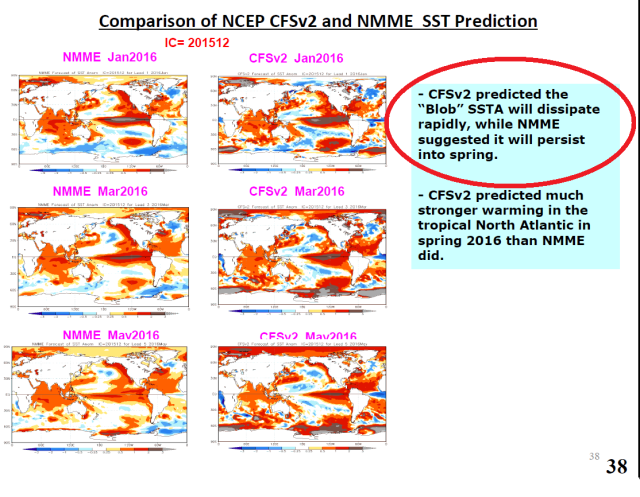 The second note is discussing the forecasts for the sea surface temperatures of the North Atlantic in response to the 2015/16 El Niño, which usually begins in the early part of the decay year of a strong El Niño.

For more information about The Blob, see the posts linked at the beginning of this post.

I also discussed and illustrated the blatantly obvious impacts of The Blob on 2014 and 2015 global sea surface temperatures in my free ebook On Global Warming and the Illusion of Control – Part 1 (25MB .pdf).  See General Discussions 2 and 3.  Simply click on those general discussions in the ebook’s Table of Contents. Of course, global sea surface temperatures in 2015 were also strongly impacted by the 2015/16 El Niño, as they will in 2016 with the lagged effects of the El Niño.

Research interest: the long-term aftereffects of El Niño and La Nina events on global sea surface temperature and ocean heat content. Author of the ebook Who Turned on the Heat? and regular contributor at WattsUpWithThat.
View all posts by Bob Tisdale →
This entry was posted in The Blob. Bookmark the permalink.

18 Responses to THE BLOB Seems to Be Disappearing at the Surface – But Will It Reemerge?