Tired of the Claims of “Warmest Ever” Month and Year? They Will Likely Continue Next Year

Last year, we discussed in a number of posts how the claims of record high global surface temperatures were due primarily to the unusual, naturally occurring warming event in the eastern extratropical North Pacific…known as “The Blob”.  See the list of posts about The Blob and its impacts at the end of this post.

This year, in addition to The Blob (which still exists), there is an El Niño developing in the eastern tropical Pacific. This has driven global surface temperatures even higher…once again naturally. As a result, it seems that NOAA has proclaimed “theee warmest ever [insert month name here]” each time they update their monthly State of the Climate Report.

Next year, can we expect a repeat of the monthly “warmest ever” claims?

Update:  I forgot to mention that I’ve included lower troposphere temperature data as a reference. 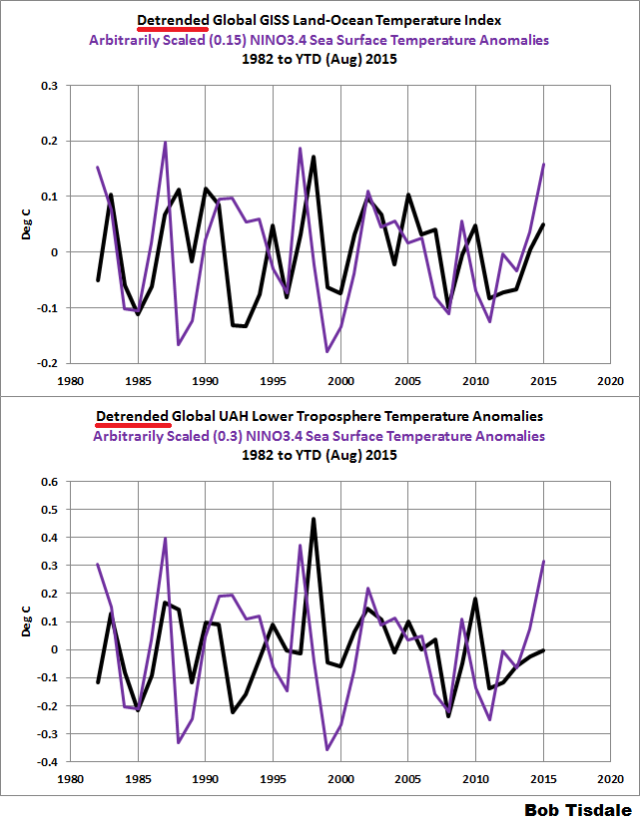 And for your information, Figure 2 includes the annual GISS land ocean temperature index and UAH lower troposphere temperature anomalies, with the year-to-date (January to August) average highlighted with a red horizontal line. 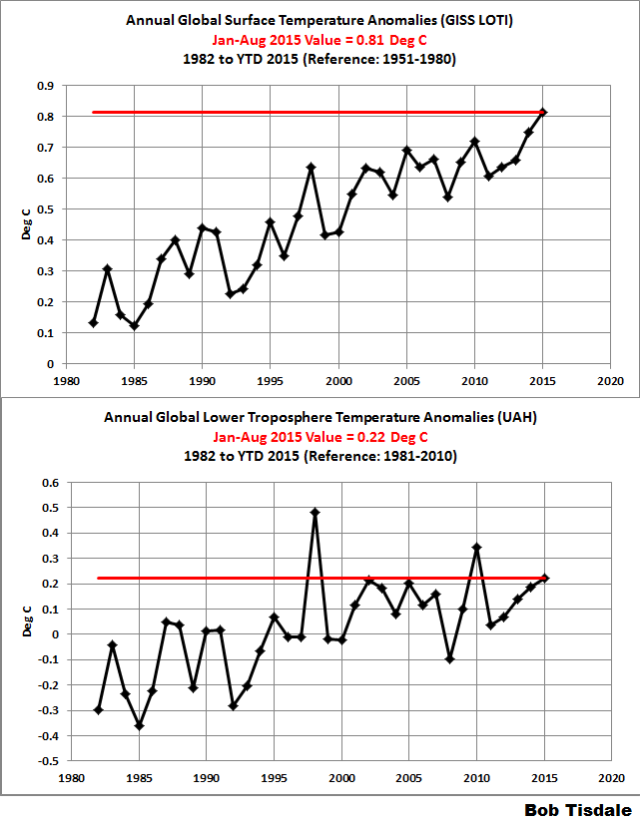 The big question mark continues to be The Blob.  IF (big if) The Blob disappears after the 2015/16 El Niño, that drop in temperature in the eastern extratropical North Pacific SHOULD (big SHOULD) offset some of the typical lagged effects of the El Niño.  Personally, I wouldn’t bet on a complete departure of The Blob.

POSTS ABOUT THE BLOB

Research interest: the long-term aftereffects of El Niño and La Nina events on global sea surface temperature and ocean heat content. Author of the ebook Who Turned on the Heat? and regular contributor at WattsUpWithThat.
View all posts by Bob Tisdale →
This entry was posted in 2015-16 El Nino Series, TLT and LOST Updates. Bookmark the permalink.

13 Responses to Tired of the Claims of “Warmest Ever” Month and Year? They Will Likely Continue Next Year