We’ve already discussed Cowtan and Way’s infilling of HADCRUT4 data in the post On Cowtan and Way (2013) “Coverage bias in the HadCRUT4 temperature series and its impact on recent temperature trends”.  The paper is available here.  In that earlier post, I presented the following graph and noted: 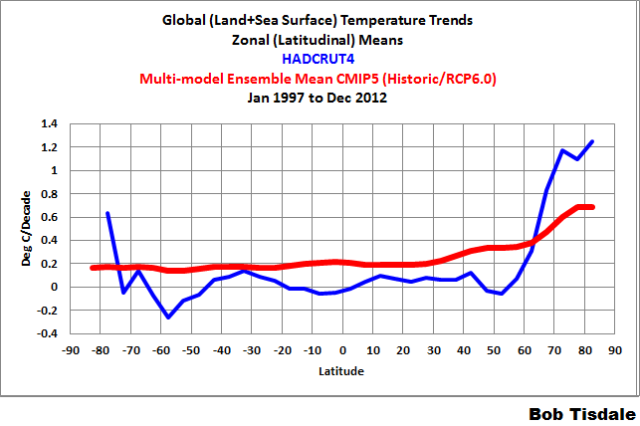 The Cowtan and Way (2013) data do increase the warming at the poles and exaggerate the failings in the models there, while doing little to explain the hiatus in the non-polar regions, which make up about 90% of the planet.

Note: For those not familiar with the type of graph shown in Figure 1: It illustrates the warming and cooling rates of the HADCRUT4 data, and the average of the CMIP5 (IPCC AR5) climate runs for the period of January 1997 to December 2012…the hiatus period. The vertical axis (y-axis) is scaled in deg C/decade, so we’re showing the warming and cooling rates (that is, the trends). The horizontal axis (x-axis) is scaled in latitude, so the South Pole is to the left at -90 (90S) and North Pole is to the right at 90 (90N). From 1997 to 2012, the HADCRUT4 data show the very slow warming rates (and cooling at some latitudes) extending from the mid-latitudes of the Southern Hemisphere to the mid-latitudes of the Northern Hemisphere.  Both poles continue to show warming, however.  On the other hand, the models do not show the lack of warming in the non-polar regions during this period.  That is, they do not capture the hiatus, the pause, the halt, the cessation of global warming in the non-polar regions.  And the models underestimate the warming at the poles, especially in the Arctic, and that means the models do not properly simulate polar amplification.   But we already knew the models cannot simulate polar amplification—we discussed and illustrated that failing in the posts here and here.

In the earlier post, I had not presented warming rates (or lack thereof) for the Cowtan and Way data on a zonal-mean (latitude-average) basis (like Figure 1)because their data is not available on a gridded basis in an easy-to-use format.  However, blogger Nick Stokes made the effort to determine those trends for the Cowtan and Way “hybrid” version, for the period 1997 to 2012.  (Just what we’re looking for.)  See Nick’s post Cowtan and Way trends.  Nick was also very kind and he listed the trends in a table.  (Thanks, Nick.) 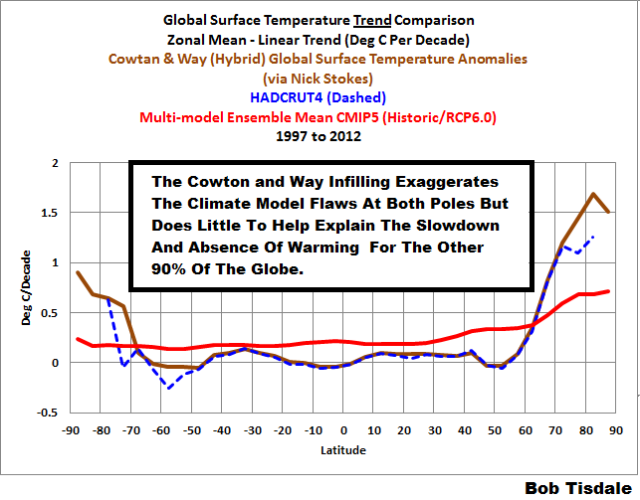 The Cowtan and Way (2013) revisions to the HADCRUT4 data do nothing to explain the absence of warming that is occurring in the non-polar regions during the hiatus period. Those non-polar regions cover about 90% of the planet and it’s there that climate models cannot explain the slowdown and absence of warming.  The Cowtan and Way revisions also exaggerate the warming at the poles which further undermines the current generation of climate models, because the models are unable to explain the observed warming at the poles.  That is, the models are still not capable of properly simulating polar amplification.

Those who promote the Cowtan and Way (2013) revisions to the HADCRUT4 data don’t understand where the hiatus is taking place and they don’t understand the model failings at simulating polar amplification—or—they are intentionally being misleading.

The HADCRUT4 data and the climate model outputs are available through the KNMI Climate Explorer.

Research interest: the long-term aftereffects of El Niño and La Nina events on global sea surface temperature and ocean heat content. Author of the ebook Who Turned on the Heat? and regular contributor at WattsUpWithThat.
View all posts by Bob Tisdale →
This entry was posted in CAGW Proponent Arguments, Climate Model Failings, Climate Model Problems, HADCRUT4. Bookmark the permalink.