Due to data availability, the end months of the data in 2015 vary.

Let’s start with the…

We should expect lower troposphere temperatures to continue to rise through March/April of 2016 and then decline through 2016…and then continue to drop into 2017 in response to the 2016/17 La Niña, assuming one forms (reasonable assumption).

Figure 3 includes the GISS Land-Ocean Temperature Index (data here).  The NOAA/NCEI land+ocean surface temperature data (here) are shown in Figure 4.  Both the GISS and NOAA data are available through November 2015. The UKMO as of this writing still have not published their November 2015 HadCRUT4 data (here), so they end in October in Figure 5.

Note that the scales of the y-axis are smaller in Figures 3 to 5 than they were in Figures 1 and 2. 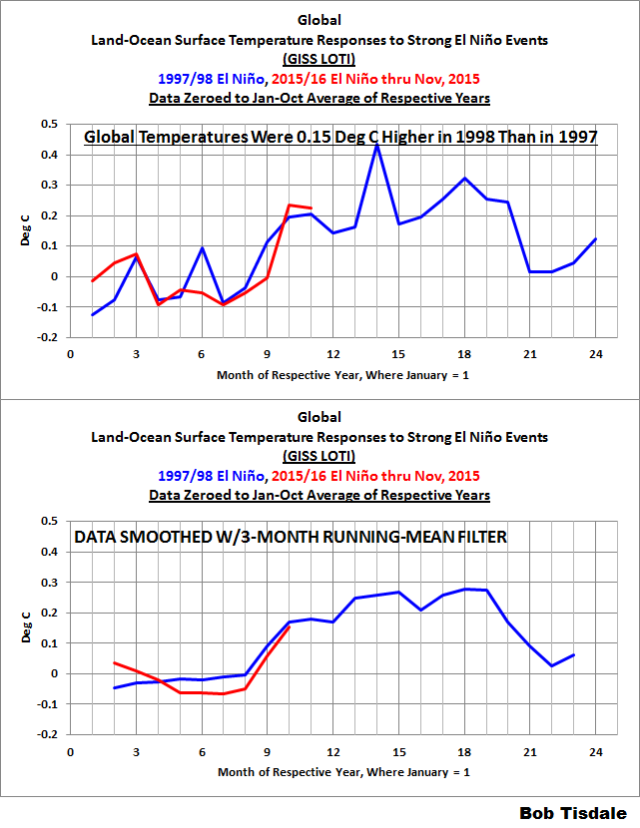 I’ll try to update these graphs every couple of months.

FOR THOSE NEW TO DISCUSSIONS OF EL NIÑO EVENTS

I discussed in detail the naturally occurring and naturally fueled processes that cause El Niño events (and their long-term aftereffects) in Chapter 3.7 of my recently published free ebook On Global Warming and the Illusion of Control (25 MB).  For those wanting even more detail, see my earlier ebook Who Turned on the Heat? – The Unsuspected Global Warming Culprit: El Niño-Southern Oscillation. Who Turned on the Heat? only costs $5.00 (US).

Research interest: the long-term aftereffects of El Niño and La Nina events on global sea surface temperature and ocean heat content. Author of the ebook Who Turned on the Heat? and regular contributor at WattsUpWithThat.
View all posts by Bob Tisdale →
This entry was posted in 2015-16 El Nino Series. Bookmark the permalink.